On this day, October 26, 1968, the Centennial Museum and the H.R. MacMillan Planetarium opened at their new (iconic) building in Vanier Park.  The Museum of Vancouver (“MOV”) is the focus of today’s Vancouver Icons photo feature.

The museum was founded in 1894 by the Art, Historical, and Scientific Association of Vancouver, with rented space and a donated collection that began to grow. On April 19, 1905, the museum officially opened on the top floor of the Carnegie Library, that year more than 10,000 people signed the museum’s guest registry. 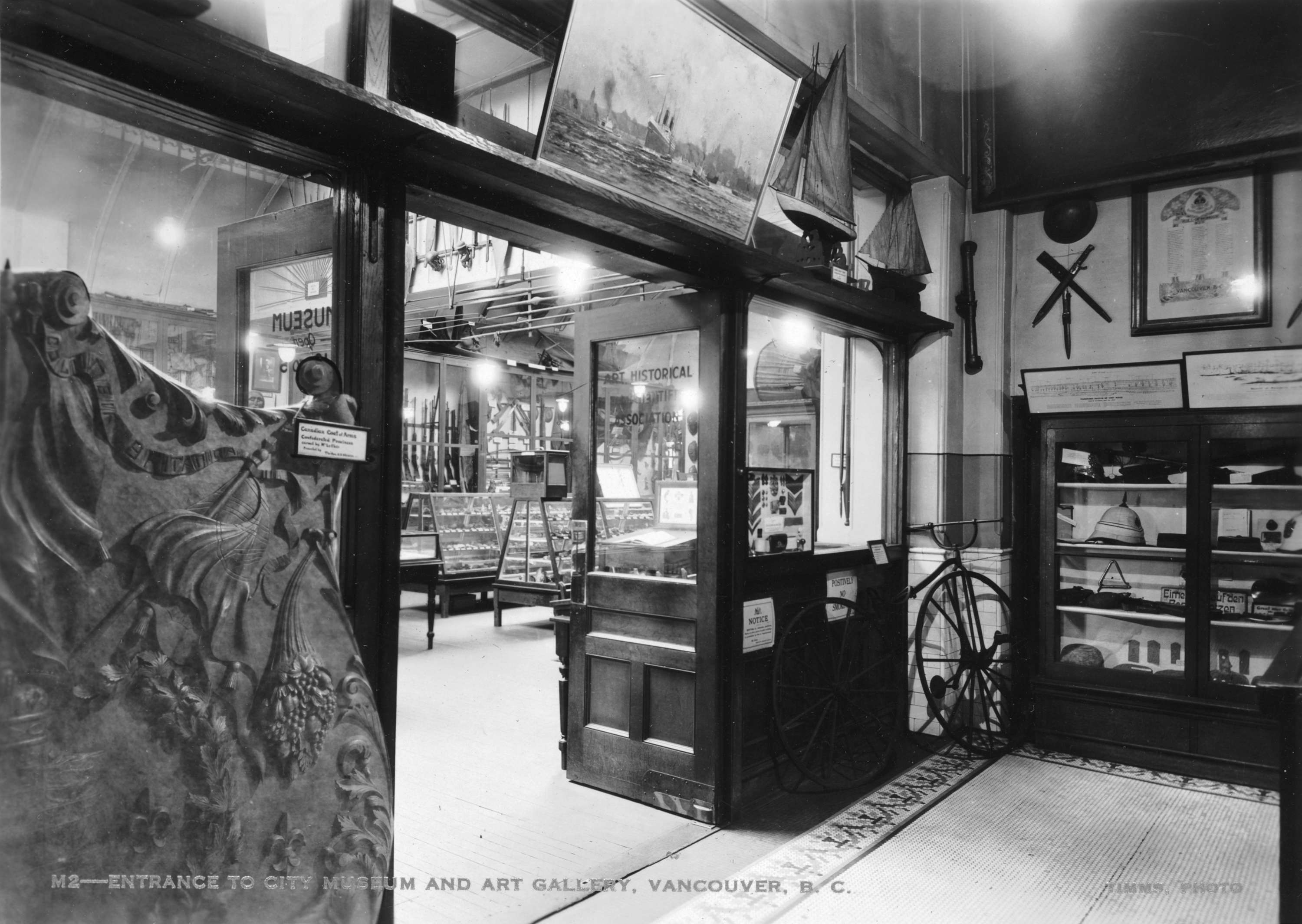 When the main library branch moved out to Burrard and Robson in 1957, there was even more room for the museum but the search was on for a dedicated site. That came when Federal and provincial money was made available for the 1967 Confederation Centennial celebrations and the current building was constructed. 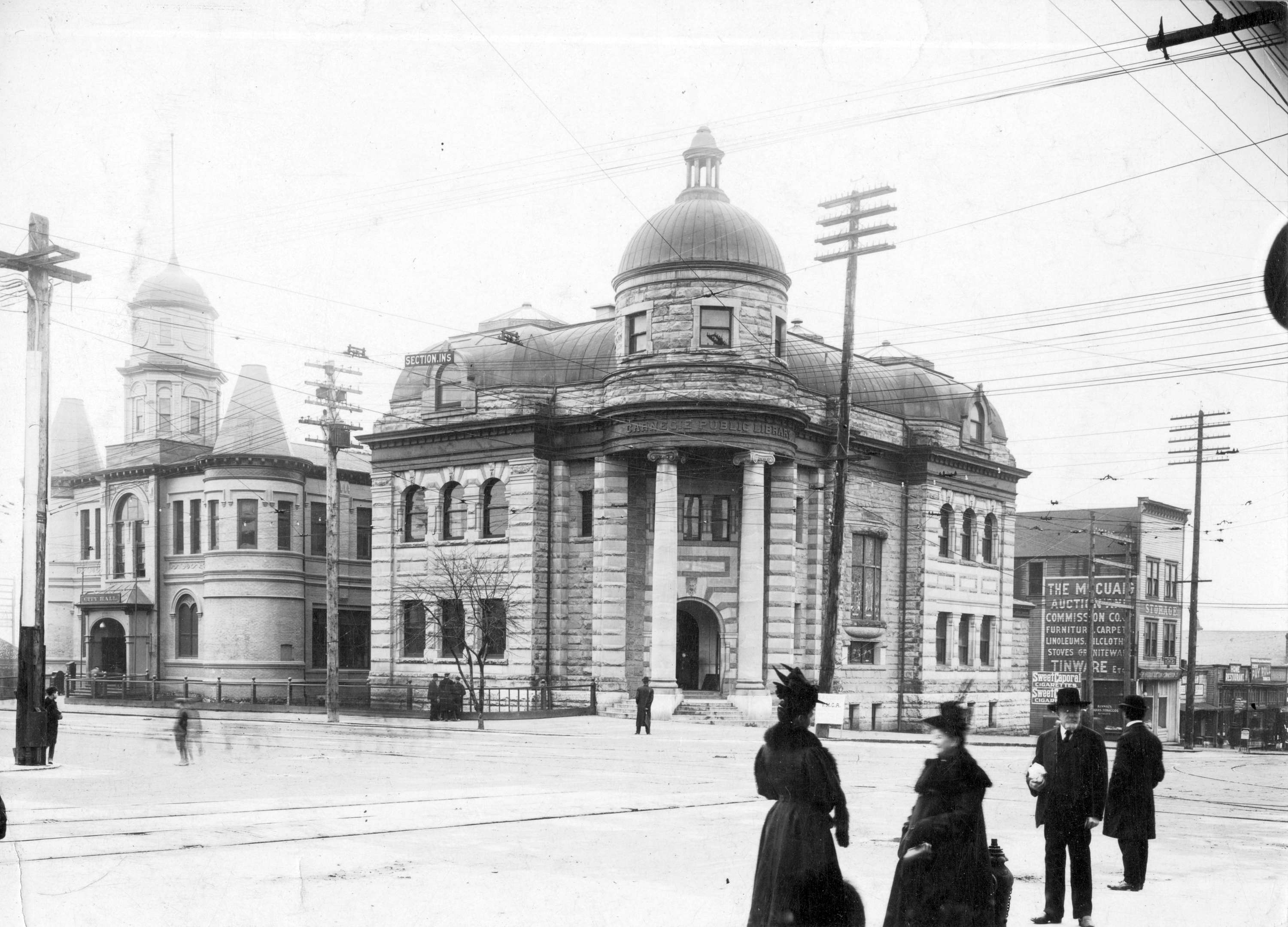 “Designed by the well-known architect Gerald Hamilton, the building was planned to house only the museum. A generous gift by the late H.R. MacMillan allowed the architect to incorporate a planetarium into the design. The distinctive dome atop the Museum, similar in shape to that of a woven basket hat made by Northwest Coast First Nations peoples, became one of the best-known landmarks on the city skyline.” [Source]

“The walls of the complex are finished in delicately detailed white concrete panels, their ornament and relationship to the reflecting pools reminiscent of Yamasaki’s Pacific Science Center for the 1962 Seattle World’s Fair. Hamilton’s other buildings in the New Formalist vein include St. George’s Greek Orthodox Cathedral, built in 1970 at 4500 Arbutus Street, and an office building at 1090 West Pender Street completed the same year.” [Source] 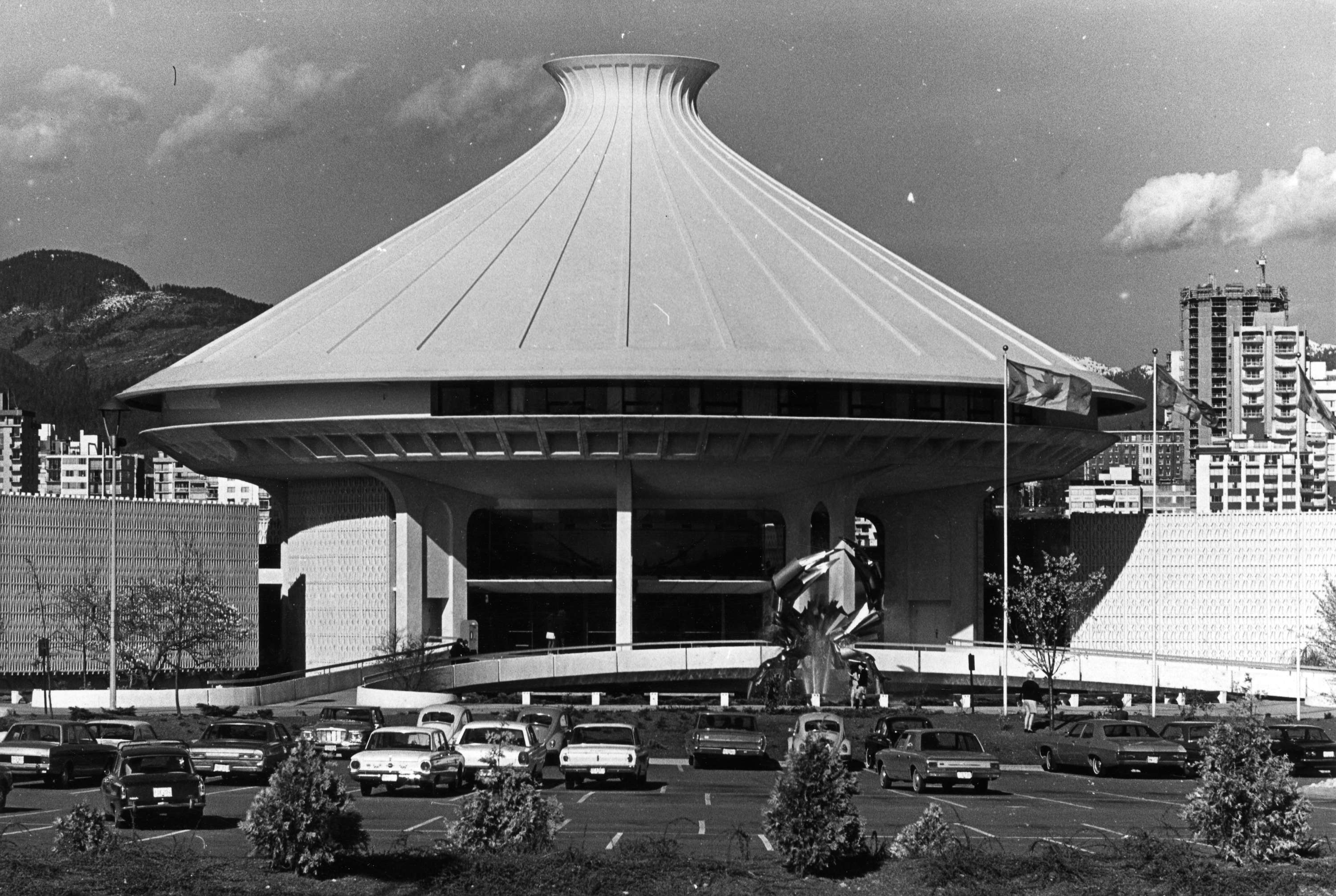 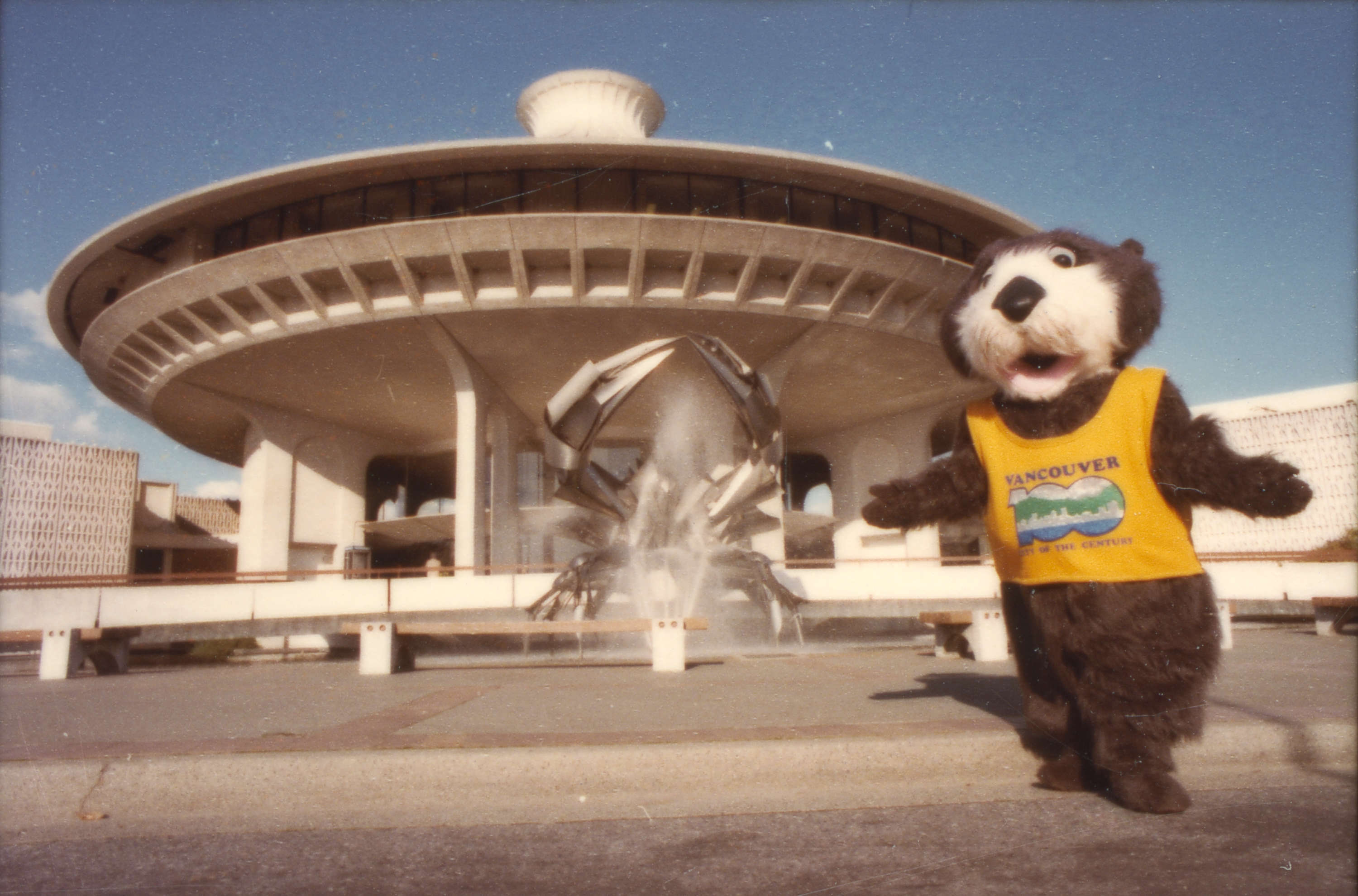 Today, the MOV, which was rebranded as such in 2009, is the largest civic museum in Canada and the oldest museum in Vancouver. 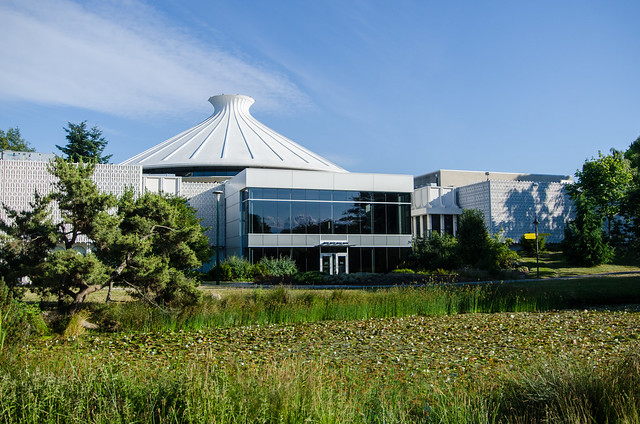 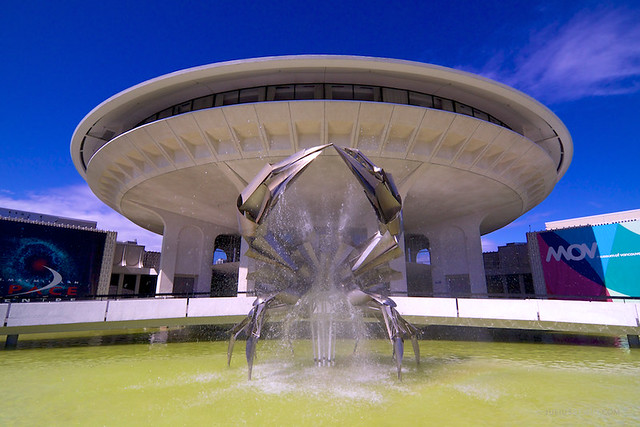 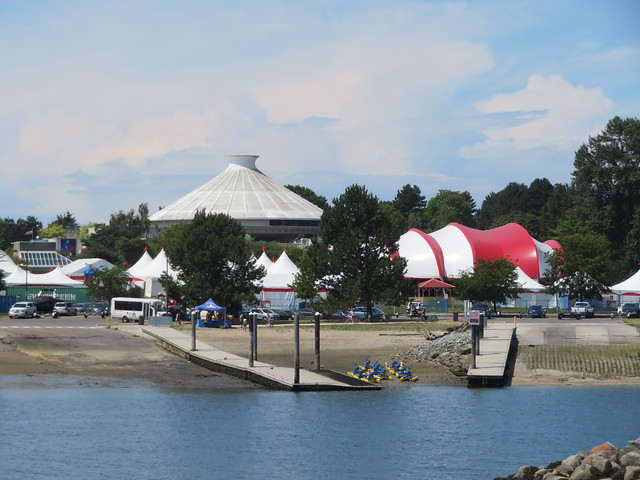 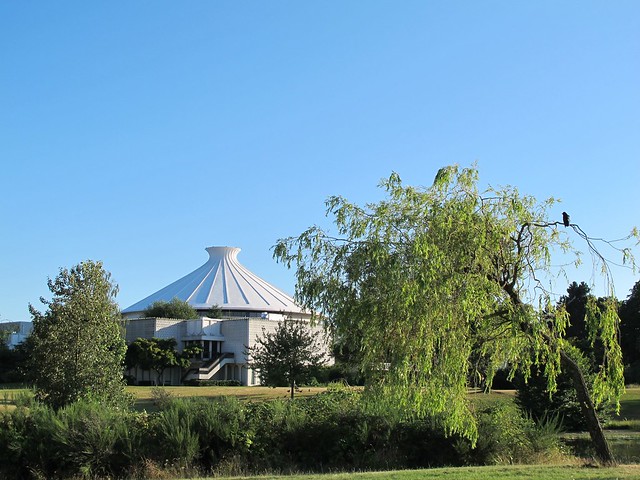 Current exhibitions (complimenting the permanent galleries and collections) include: Acts of Resistance, Haida Now, c̓əsnaʔəm the city before the city, and more.