On April 19th, 1956 construction began on the main branch of the Vancouver Public Library. Today there’s a heritage marker on the building, that sits at the northeast corner of Robson and Burrard, next to the window displays full of lingerie and the latest PINK products at Victoria’s Secret.

1945: VPL board chair, G. Stanley Miller, requested $1.5 million from the city, which would include a $1 million main library “in keeping with Vancouver’s civic dignity.” The remaining $500,000 would be spent on branches throughout the city. Miller noted that when the Carnegie Library at Hastings and Main was built in 1903, the population was only 40,000. The population in 1945 was 320,000. [Source: Vancouver Sun]

Robson and Hornby (Robson Square), Pender and Homer, and Pender and Cambie were all proposed sites for the Main Branch in the 1940s. Read more and see some renderings for buildings, that included civic theatres, in the Vancouver Sun article here »

A Vancouver Sun editorial called the city’s continued “stalling” on the library site “ridiculous.” In September 1954, the city decided to give up on the idea of a new Downtown hotel and to proceed with the library on the Robson and Burrard site.

1952: The City of Vancouver purchased the property at 750 Burrard.
April 1956: Construction began.
November 1957: The Main Branch opened. Chuck Davis writes: “The location was criticized by some at the time because “there isn’t enough foot traffic.” The sleek, modernist structure was Vancouver’s first glass curtain building, designed by architects H.N. Semmens and D.C. Simpson. It was awarded the Massey Medal, Canada’s highest architectural honour.”

August 1988: A water main broke and flooded a wide area of the branch. It forced a one-day closure, badly damaged many books (some rare), and ruined a big collection of newspapers.

“There was never any serious question that a new central library was in order for Canada’s most literate city,” Sandra McKenzie wrote. “The old facility, built in 1957 at Robson and Burrard, was designed to accommodate 750,000 volumes, with seating for 300 patrons. In the intervening years the VPL’s collection, which numbers over 1.4 million items, and public demand for the library’s services, swelled well past this capacity. Despite seconding the auditorium, several meeting rooms and much of the seating space to shelf space, nearly a third of the collection was stored in the basement, while more than 5,000 patrons a day scrambled for scarce chairs.”

November 1990: Vancouver voters endorsed capital funds for a new central library. The City then bought the site at 350 West Georgia Street from the federal government. The provincial government agreed to a twenty-year lease of two floors in the proposed new building, with the expectation that the library would then acquire the space. [Source: VPL]

1995: The Main Branch moved to the Vancouver Public Library’s Central Branch we have today at 350 West Georgia Street.
1996: A multi-level Virgin Megastore moved in and Planet Hollywood restaurant was upstairs from 1997 to 1999.
2005: HMV took over the Virgin Megastore space until 2012.
2013: Victoria’s Secret opened in May of 2013. A Shoppers Drug Mart is also currently at street level.

Vancouver Television (VTV) also occupied several floors from 1997 to 2001 before CTV Globemedia took over the space. 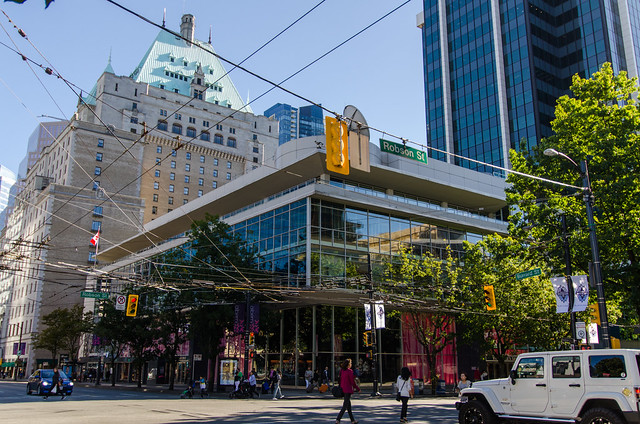 Share10
Tweet8
Share
Pin3
Email
Reddit
WhatsApp
21 Shares
Current Contests on Miss604
*All contests are open to residents of Canada only, unless otherwise stated. Contest timelines are published on each individual post along with entry methods. Some contests may only be open to those 19 years of age and older. Winners are announced on the contest blog posts. Contest policy »
Comments are closed on this post
Advertisement