These remnants of the original forest remain a century and a half after loggers’ saws first cut through the rainforest. It’s not hard to spot evidence of  this 19th century industry in the massive stumps dotting the Park’s forest – each bearing the scars of springboard notches or platforms upon which two men would balance drawing a saw across the expansive tree trunk between them. Though most of us stand in awe with craned necks under the giants, the stumps below are compelling in their own way.

Second and third growth forest rises around the stumps, and even from them. The old “nurse” stumps support young hemlocks sprouting from the seeds of tiny hemlock cones dropped from branches above.

As these trees themselves age and fall, their value to wildlife is immeasurable: standing snags offer nesting cavities for wood ducks and woodpeckers. The rotting wood serves up an insect buffet for insectivores like the woodpeckers, while the decomposing trees and stumps refresh the soil with a heavy nutrient load. So important are these dead trees and rotting stumps to forest health, that the Park Board only removes fallen trees that may pose a hazard to Park visitors. The rest are left to provide their vital ecosystem services.

The most famous stump of Stanley Park is, of course, the “Hollow Tree”. At its prime, this remnant of a Western red cedar was about 800 years old and measured 5.5 meters in girth. Likely killed by lightening, this landmark was already a stump decades before the Park was established in 1888. It has been one of the most popularly photographed landmarks of the Park, captured for all time in photographs of buggies, horses, families and early vehicles parked in its centre.

Severe windstorms in 2006 cemented the Hollow Tree’s decline, forcing the Park Board to either lay it to rest or engineer a solution. An interior steel scaffold now supports the popular giant, while its likeness has been immortalized in Douglas Coupland’s  eye-popping life size gold sculpture displayed on a plaza at the south end of Cambie Street. 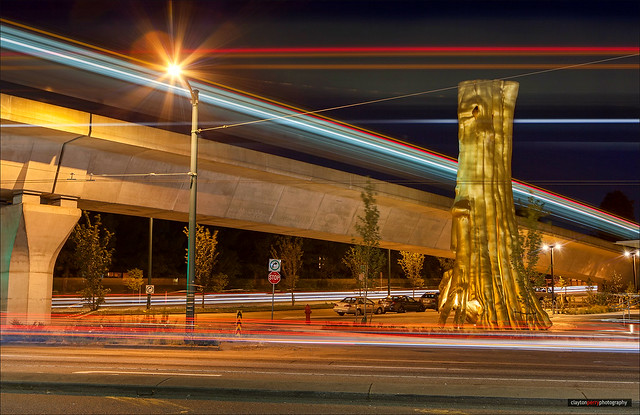 For Park wildlife and visitors alike, it’s the real stumps that are most precious with both history and sustenance housed in their crumbling bark. This fall, come wander the quiet forests of Stanley Park and be sure to include the not-so-lowly stumps in your contemplations.

About the SPES Monthly Feature

As a member of the Stanley Park Ecology Society, Miss604 wanted to offer the organization an opportunity to share their news, events, so we created the “SPES Series” years ago. This is where SPES can contribute and share stories with the Miss604 audience once a month. Follow SPES on Facebook for more information.

Share28
Tweet8
Share
Pin1
Email
Reddit
WhatsApp
37 Shares
Current Contests on Miss604
*All contests are open to residents of Canada only, unless otherwise stated. Contest timelines are published on each individual post along with entry methods. Some contests may only be open to those 19 years of age and older. Winners are announced on the contest blog posts. Contest policy »
Comments are closed on this post
Advertisement

Also on Miss604.com
« Metropolis at Metrotown Job Fair 2019
A Night of Generosity at the Gift of Time Gala »