Seven months after John and I were married in 2006 we conducted our first band interview together. Using my blog as a written outlet and our music podcast for publishing the audio, the trend continued over the years. However, we’ll never forget the first time we were ushered through the back hallway of Richards on Richards to hang out with Jim Ward from Sparta. We talked about music, sushi, Vancouver, and the show he and Matt Miller (bass), Keeley Davis (guitar), and Tony Hajjar (drums) were about to rock out for us.

The following spring, we interviewed Keeley in the green room of the Commodore Ballroom – another first for us – and about a year later Sparta went on an indefinite hiatus. Some of the members worked on other projects like Sleepercar (Jim Ward) or Denali (Keeley Davis) and reunited old bands like At The Drive In (Jim Ward, Tony Hajjar).

After announcing an ‘awakening’ in 2011, the whole band came together and returned to the studio in early 2013. They are now setting out for a Canadian tour, with Whistler and Vancouver being the first two stops. Learning this news, I knew I had to connect with the band to talk about their return so I arranged a call with Matt Miller to chat about his time off, the return to the studio, and hitting the road once again.

“For the first two years after we stopped touring I actually took time off, I actually didn’t do anything for two years,” Matt told me. “It was pretty awesome, I did nothing.” Matt explained that he has been working since he was 18 and he never had a summer off, this time away from Sparta was his chance. Playing music with friends in Los Angeles where he’s based, enjoying the city, and getting to the outskirts of the region to enjoy Big Bear, Mount Wilson, or Joshua Tree has allowed him to do some soul searching and discover a different appreciation for his music.

When the guys decided to play as Sparta again last year Matt said it took about four months to rally everyone, align schedules, and get them back into the studio in El Paso, where they originally came together. “When we talked about bringing Sparta back that was one of the things, you know. I’m not doing this for money or anything. I’m only doing this because I still enjoy playing with you guys and I still enjoy playing music live so that’s all I’m going to get.”

The studio they used had been shuttered up since 2006 but thanks to their relationship with the owner, who they had known since they played music as teenagers, they dusted off the cobwebs and spent eight days recording earlier this month. Matt said it was as though they awoke a sleeping monster in there.

“It’s going back a little bit from the past and grabbing a little of what we had before and going forward with it.”

“There were a few phone calls, a lot of timing issues trying to get all together but once we got in there we pretty much wrote and recorded almost the entire record in eight days.” Previously it had taken the band anywhere from six to twelve weeks to put an album together when they were on a major label. “It was just a different feeling this time, to me it was almost magic. Everything just flowed out so quickly and so fast. Right away. We wouldn’t question, we just committed.” Matt said that they used to be hard on themselves for their own reasons but this time it just felt more natural.

As for the resulting album, I asked if it would be continuing in the direction of Threes (2006) or more like previous records like Wiretap Scars (2002) or Porcelain (2004). “It’s both. It’s kind of going back but going forward from where Threes left off. I’ll say this record is definitely going to be heavier. That’s for sure but it’s you can tell it’s us – at least I hope so. I don’t think it’s been that long but it definitely feels like us.”

Back in 2008 Facebook was just emerging as a tool for artists and that’s when Sparta first took their “three year nap“. Scrolling through their profile, wall posts from fans in 2009 and 2010 begged for updates from the band. When the news of their reunion hit, it rippled throughout their social media channels. 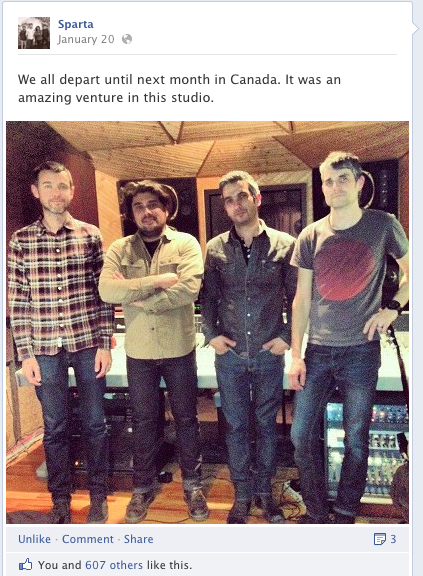 “We used to have email lists and do blasts and this (Facebook) was totally different.” Matt said that using Facebook and Twitter changed communications between the band and its fans. “This was like having a live conversations with people – that’s what it felt like. So it was like whenever we had something to announce or had to say anything we could, and it would be like that live conversation. Which was really nice, rather than blasting out an email.”

“So as soon as we decided to come back and we started using [Facebook] we’ve been having a great time using it. Having Instagram integrated into it was really cool too because when we were in the studio in El Paso last week it was so awesome to see immediate responses to the photos that we were taking right there and posting. Whereas in the past that would take like a couple weeks to get a response – like putting them on your website or on your forums, this is totally different. Everything is so much faster and it feels like a live conversation.”

It was through Twitter (the account of the band opening for Sparta in Vancouver, In Medias Res) that I heard about their return to our fair city. Sparta actually recorded their first album in Vancouver, which was a talking point when we first met Jim. Matt says everyone just fell in love with Vancouver from then on.

“When I was leaving El Paso, Vancouver was on the list of where I wanted to move.” Los Angeles won out due to its frequency of sunny days but it still has a place in Matt’s heart. “Vancouver is a place that I absolutely love. I can’t even remember the restaurants we used to go to there, I don’t know if they’re even there anymore. But having a lunch break from the studio and going out and finding an awesome cafe or amazing sandwich shop or going snowboarding and skiing, it was a truly amazing experience. Whenever we get a chance to go back we enjoy it, it’s so awesome. I’m really excited.”

You can catch Matt and the rest of Sparta at the Biltmore Cabaret on Thursday, February 21, 2013. Tickets are now on sale but they’re going fast and have already sold out in Calgary. Follow Sparta on Facebook, Twitter, and Instagram for the latest updates and check out their free download that was released last year.