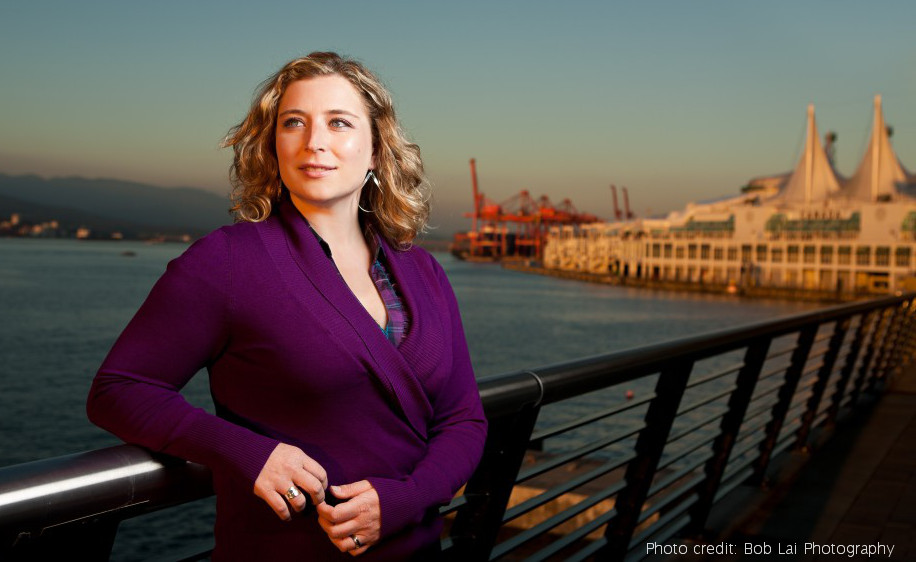 Rebecca built her first website in 1997 and she has been blogging about life in BC since 2004 on Miss604.com.

She has been named one of BC’s Top 100 Women of Influence by the Vancouver Sun and in 2014 Notable named Miss604 the Best Blog in Western Canada. Between 2008-2020 Rebecca has won 30 local blog awards in Vancouver and in 2016, she won Variety International’s media award for her work with Variety – The Children’s Charity.

Over the last 15 years Miss604 has published over 10,000 posts about fun things to do, local insights, non-profits news, travel and history. Rebecca remains committed to supporting her community and continues to sponsor over 25 events each year in around BC.

She is the Marketing Committee Chair and Secretary of the Board of Directors Variety BC as well as an Official Jeans Day Ambassador for the BC Children’s Hospital Foundation and Miss604 is the proud blog sponsor of Big Sisters BC Lower Mainland, Covenant House BC, and VGH+UBC Hospital Foundation. In 2020, Rebecca joined the Board of Directors for the BC Entertainment Hall of Fame as Vice President, Marketing and the board of the Stanley Park Ecology Society.

Connect with Rebecca on LinkedIn for additional professional resources.

Rebecca built her first website in 1997 and she has been blogging about life in BC since 2004 on Miss604.com. Originally from Surrey BC, Rebecca has been working professionally in online media for the last 16 years, from producing and managing live event streaming (2000-2004) to corporate webcasting and news dissemination.

Over the years Miss604 has become Vancouver’s most award-winning blog. Miss604 was accredited for the BC Media Centre at the Vancouver 2010 Olympic Games and in 2015, Rebecca was chosen as the City of Vancouver’s official host city blogger for the FIFA Women’s World Cup, and was Wines of Chile Ambassador for TED 2016.

Miss604 has partnered with and worked with some of the nation’s top organizations. From the Royal Canadian Mint, VISA, NHL, and Samsung, to Target, Cadbury, Hudson’s Bay, Starbucks, Pepsico, Tim Horton’s, Starwood Hotels, Ford, Honda Canada, and FIFA Women’s World Cup — and many more. Rebecca has also been featured in the Wall Street Journal, WNYC, the Vancouver Sun, BC Business, AUDI Magazine, CKNW, News1130, Global BC, CTV, CKPG News, Shaw and City TV.

Working as CEO for sixty4media, Rebecca consults, mentors, and leads classes on social media and blogging for business. From non-profits and schools, to law firms, small businesses, arts organizations, and beyond. In 2016 she will be an instructor at Camp Tech in Vancouver.

In 2016, Rebecca was elected to the Board of Directors for Variety BC – The Children’s Charity, and for the 125th anniversary of the City of Vancouver, she was on the selection committee for the Heritage Vancouver ‘Places that Matter’ campaign. 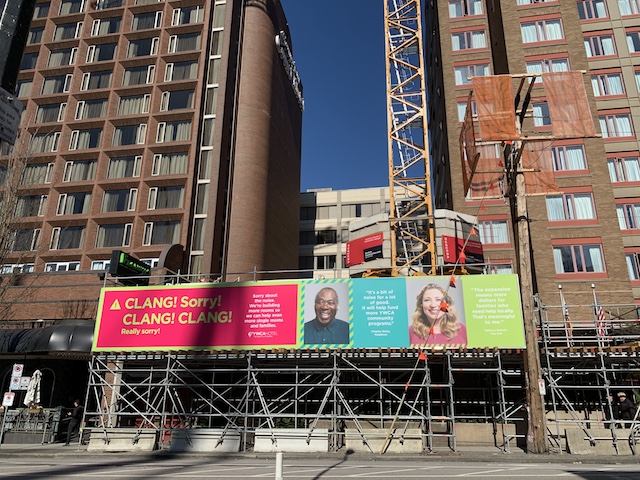 She was the Vancouver organizer of Twestival, and Blogathon – both annual social media events for charity that raised over $30,000 for global and local causes between 2007 and 2010. In 2013 and 2014, Miss604 readers also raised over $10,000 for the BC Children’s Hospital Miracle Weekend, BC SPCA, and Covenant House Vancouver. She is a 7-time sponsor of the YWCA Women of Distinction Awards, 3 time sponsor of the Canuck Place Gift of Time Gala, and has sponsored every major City of Surrey event, including Canada Day celebrations, since 2008. Since 2015, Miss604 has been a sponsor of the Big Sisters Volunteer Recruitment Program. 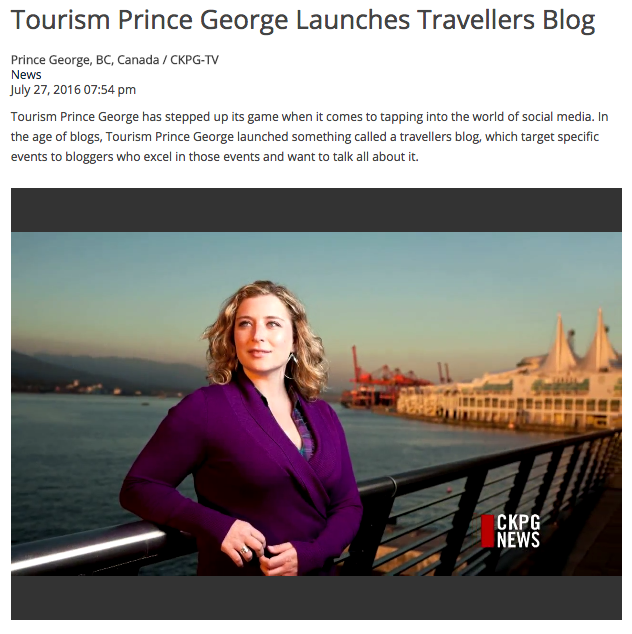 “Rebecca Bollwitt, an award-winning blogger, author, and columnist who shows off Vancouver and its oceanic environs in the very best possible light.”
Westender, Grant Lawrence, 2015

“In a city where there are hundreds of bloggers sharing their thoughts and activities, Miss 604 stands out. She’s informed, informative and seems to know every corner of this city and beyond. She’s not so much Vancouver’s cheerleader but more of the enthusiast who shows her love of the city by embracing many of the activities it has to offer…”
WE Vancouver, Best of the City 2013 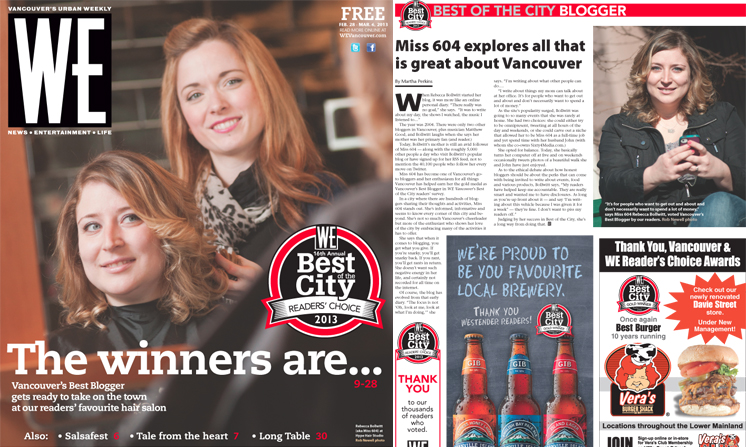 “Credited with paving the way for today’s numerous Vancouver bloggers, Miss604 is a revolutionary site that first recognized the potential of posting content beyond the diary genre…” Blogging At Its Best, Vancouver View Magazine 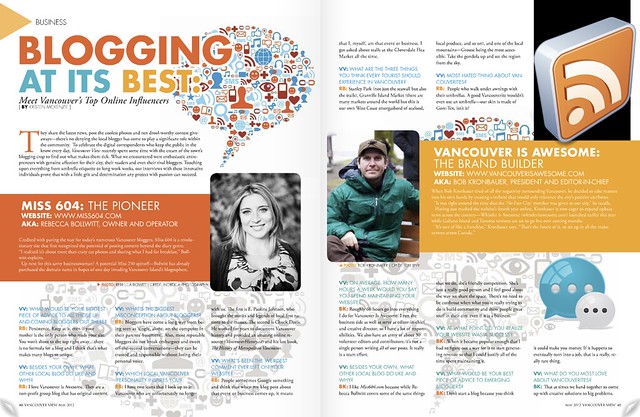 May 2012 Feature in Vancouver View Magazine

“Also known as the brains behind miss604, Vancouver’s own sweetheart has been known among locals as the go-to blog that caters specifically towards the city’s events.” Canada’s Most Beautiful, Vancouver Observer

“TransLink has worked with Rebecca on a handful of campaigns over the years. Miss604 has been an important part of our social media work. Her blog and social media channels help us reach an audience that isn’t normally available to us. Rebecca is professional, accommodating and a pleasure to work with. She knows what she’s doing. We look forward to working with her more in the future!”
– Robert Willis – Senior Communications Advisor – TransLink

“It is always a pleasure to work with Rebecca Bollwitt at Miss604.com while promoting various events and organizations for HartleyPR. Whether it’s a reflection on Bard on the Beach’s season or discussing various products and services from London Drugs, Rebecca writes captivating posts that engage readers. Contests that have been promoted through miss604.com were successful with high engagement and impressions. Her loyal and strong readership along with her social media prowess make her an enviable social media partner. It’s always a delight to see what we can come up with next for stories and contests.”
– Cynnamon Schreinert, Hartley PR

Rebecca was a finalist for Woman Entrepreneur of the Year in 2009 (Impact Entrepreneur Group) and was named one of BC’s Top 100 Women of Influence by the Vancouver Sun in 2010. Canadian PR for the Real World has also listed Rebecca Bollwitt as one of the top digital influencers in Canada (2014). In 2014 Miss604 was named “Best Blog” in Western Canada by Notable.ca. Featured in “Voice of Vancouver: Networking and Succeeding” ebook by Lunch with the Ladies in 2015. Lunch with the Ladies also named Rebecca one of the 7 Most Influential Female Instagrammers in Vancouver in 2016.

2021
Miss604 is the proud Blog Sponsor of Covenant House Vancouver, Big Sisters BC Lower Mainland, and VGH Foundation as well as a proud #JeanUp Ambassador for the BC Children’s Hospital

2020
Miss604 is the proud Blog Sponsor of Covenant House Vancouver, Big Sisters BC Lower Mainland, and VGH Foundation as well as a proud #JeanUp Ambassador for the BC Children’s Hospital

That Time I Was Invited to do Improv

When Vancouver TheatreSports decided to launch its first-ever all-female show series in the summer of 2016 they invited special guests from all over the city to join them on stage. I was the very first, and it was a blast! 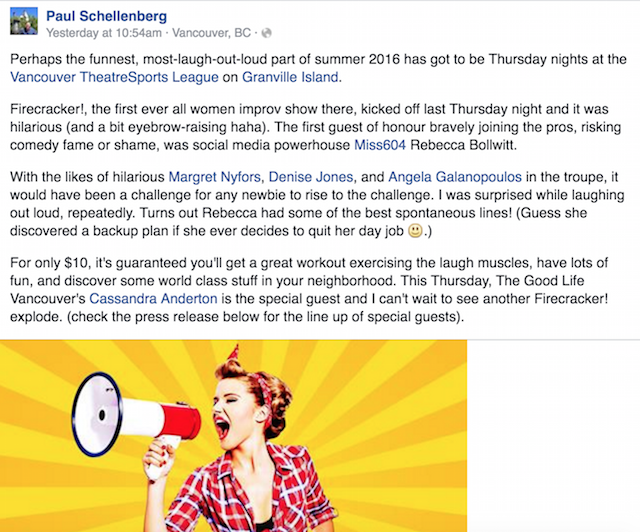 Along with Rebecca, Miss604 is powered by stories from the following contributors:

Jennifer is a mother who loves being active with her family of six. From camping, baseball, swimming, and day trips, she’s a power-mom with a passion for BC living. Jennifer contributes holiday and seasonal guides to Miss604.com as well as family-friendly event coverage and annual coverage of Cornucopia in Whistler.
Read Posts by Jennifer
@Jenny_Miles on Twitter

Alexis is a college student with a passion for writing, hiking, and live music.
Read Posts by Alexis

Michelle is a local actor, producer, and writer. She has been providing a weekly arts update including film, television, and theatre in Vancouver.
Read Posts by Michelle
@Miju on Twitter
Read Michelle’s own blog
Find Michelle on IMDB

Born and raised in Vancouver, Steffani Cameron is a writer/photographer beginning a five-year worldwide adventure she’ll be chronicling at FullNomad.com.
Read Posts by Steffani Cameron
@SnarkySteff on Twitter

John Biehler is an avid photographer, gadget geek and traveler. He has filled in for Rebecca on several media travel trips and provides stunning video and photos from these adventures.
Read Posts by John Biehler
@JohnBiehler on Twitter
Read John Biehler’s own blog

Miss604.com is a product of sixty4media. We offer custom WordPress websites and themes as well as social media tutorials.