Some are unlucky at love. Others are just plain inept. The latter populate writer-director Bruce Sweeney’s heartfelt farce that delivers finely tuned dysfunction while featuring copious local haunts and a surplus of skeletons in closets.

“TIFF kind of ties me up in knots and VIFF kind of unloosens those knots,” writer and director Bruce Sweeney told me over the phone from his cabin this summer, ahead of the busy film festival season. His latest work, Kingsway premiered at the Toronto International Film Festival earlier this month and it will soon screen at Vancouver’s festival. 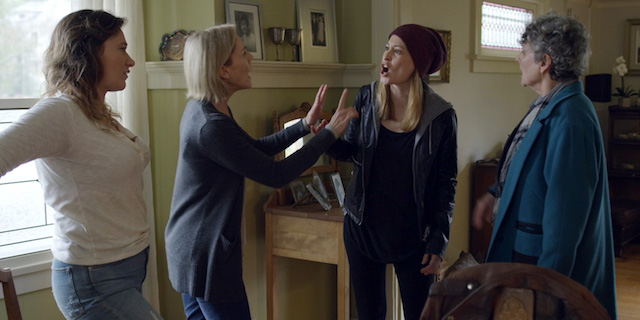 Named after a storied thoroughfare that crosses cities and in parts almost seems to intersect with itself, Kingsway, the namesake of Sweeney’s film, also serves as a metaphor. “A loose metaphor for relationships,” he says. “You think you’re going one way and you end up going another.”

It kicks off at the 2400 Motel and comes to a raucous, raunchy close six kilometres away at Main Street’s China Cloud Gallery. In between, it lingers in the veritable cul-de-sacs its players lives have become.

“We all know that there are a lot of movies out there with a ‘life is sh*t’ theme and I get that, but I just didn’t want to do that.”

What might strike the viewer is the openness of the characters – people actually saying what they mean, what they want, it’s refreshing, or as Sweeney told me, “woven into a narrative that wasn’t punishing to watch” where surface is one thing and subtext is another.

As the city prepares for VIFF, snapping up tickets and program guides, I’m pleased to sponsor Kingsway this year, and to support the festival in general. As Bruce added, “VIFF is just this very cool thing where people can come and watch films, I watch films at VIFF.” Here’s how you can watch Kingsway:

I have two pairs of tickets to give away to see Kingsway at the Rio Theatre on Saturday, September 29th. Here’s how you can enter to win:

Update: The winner is Mike!

Share2
Tweet51
Share
Pin1
Email
Reddit
WhatsApp
54 Shares
Current Contests on Miss604
*All contests are open to residents of Canada only, unless otherwise stated. Contest timelines are published on each individual post along with entry methods. Some contests may only be open to those 19 years of age and older. Winners are announced on the contest blog posts. Contest policy »