Host city of the 1954 British Commonwealth Games, Vancouver will welcome the Queen’s Baton Relay with a full day of events on August 1, 2017 as it makes its way to Australia for the next Games in 2018. 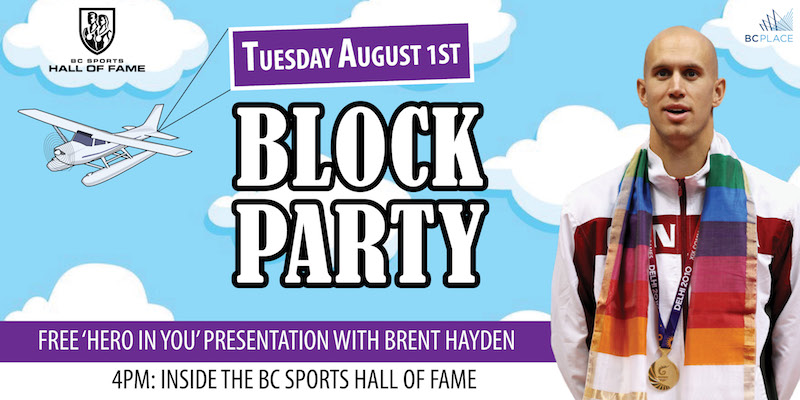 11:15 am at the Harry Jerome sculpture at Stanley Park
With Doug and Diane Clement, 1954/1958 Commonwealth Games Alumni, Commonwealth medalists

12:00pm – 4:00pm at the BC Sports Hall of Fame
The FREE Queen’s Baton Block Party at Terry Fox Plaza (BC Place) will have multiple vendors and sport activations including BC Ten Pin Federation, BC Athletics, BC Rugby plus more. Get your picture taken with the baton and more!

4:00pm at the BC Sports Hall of Fame (Gate A – BC Place)
Hero in You Athlete Presentation with Brent Hayden, 2006/2010 Commonwealth Games Alumni, Commonwealth and Olympic medalist.

The Queen’s Baton Relay was launched at Buckingham Palace on March 13th 2017, when Her Majesty Queen Elizabeth II, Head of the Commonwealth, placed her message to the Commonwealth into the baton. Over its 388-day journey through 70 Commonwealth nations and territories, the baton will have covered close to 230,000 kilometres, averaging one to four days in each nation or territory. The baton is travelling to Africa, the Caribbean, North America and then Europe and Oceania. It will finish its journey at the Opening Ceremony of the XXI Commonwealth Games in Gold Coast, Australia on April 4, 2018.

Also on Miss604.com
« Things to do in Vancouver This Weekend
Win Tickets to The Matinée’s Album Release Party »