PuSh International Performing Arts Festival and Coastal Jazz present dirtsong, with Australia’s Black Arm Band, an ensemble of acclaimed Indigenous artists who will perform harmonies and vocals in nearly a dozen languages, drawing on 40,000 years of tradition to showcase their country’s rich culture. Behind them, projections of vivid Australian landscapes – from vast plains to outback communities – will become illuminated in stunning documentary film. 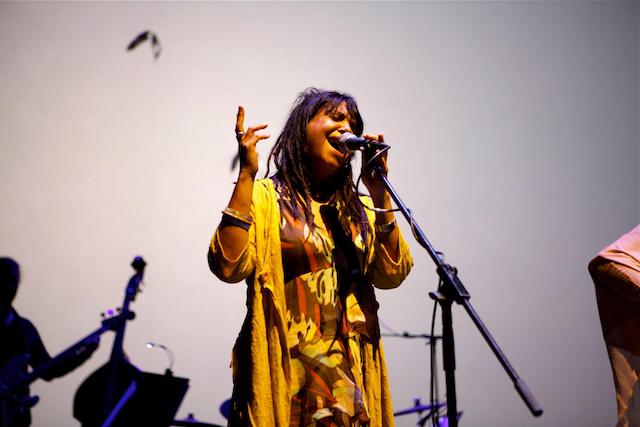 This spectacular ensemble, that specializes in Aboriginal music and languages, pulls audiences into sweeping and intoxicating visions of its Indigenous peoples and homeland – from vast plains to outback communities. Against a backdrop of stunning documentary, with driving percussion, didgeridoo, and deeply soulful vocals, the group performs songs in a dozen languages, including some now virtually extinct.

Touring for the first time in Canada — in the 150th year of a nation born from the displacement of its Indigenous peoples – dirtsong is more poignant than ever.

With driving percussion, didgeridoo virtuosity, and soulful vocals, audiences will hear 11 Indigenous dialects – some virtually extinct – as they embark on a musical journey through the heartland of Australia. Sharing five narrative episodes based on the writings of Aboriginal author Alexis Wright, the performers are accompanied by striking cinematography that will conjure places, memories, and encounters, as well as moments of community and natural wonder.

Win a Night Out at the PuSh Festival with Chambar

You have the opportunity to win a night out to see this powerful show at the PuSh Festival along with a $100 gift card for dinner at Chambar! Here’s how you can enter to win:

I will draw one winner, who will receive 2 show tickets and the gift card, at random from all entries at 12:00pm on Wednesday, February 1, 2017.

Update The winner is Rachel!

Also on Miss604.com
« February Theatre Listings in Vancouver
Things to do in Vancouver This Weekend »