I’m not sure what is more exhilarating, witnessing a pod of killer whales frolicking in the wild or going through my photos at home later, identifying their markings, and discovering that one of them was over 80 years old! I still get goosebumps thinking back on my adventure with Vancouver Whale Watch in Steveston earlier this week. 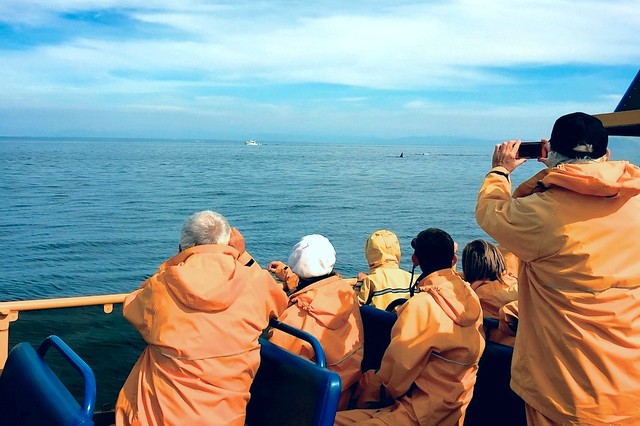 My tour was booked through Viator, a TripAdvisor company that specializes in tours and tour packages in top travel destinations. I’m fairly good at being a tourist in my hometown but one ultimate experience that locals (and visitors) need to have is spotting whales in the wild — it’s a Vancouver bucket list item for sure.

I selected the Vancouver Whale Watching Tour and booked online. This was the smoothest third party booking I’ve ever made. Some fine print on the confirmation from Vancouver Whale Watch (the tour operator in Steveston) said to call the day before your tour to confirm your spot. I hadn’t done this. I called on the morning of my tour, a little worried, and told them I’d like to confirm. They said that they do like a call in advance because they might release a seat for someone else. The woman on the other end of the phone stopped short and said: “Oh, you booked with Viator? Yeah, you’re all set. You’re in for sure.”

Setting Out on the Tour

The check-in process went just as smoothly. I showed up in Steveston and they checked me off the registration list inside the main office, where I also picked up a complimentary parking pass. Other tour participants arrived at the same time on the round-trip shuttle from Downtown Vancouver hotels. 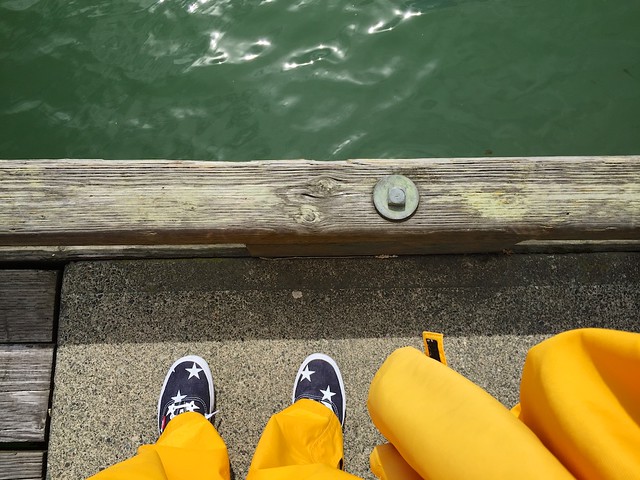 We all suited up in yellow splash pants and jackets, looking like everyone – young and old – was auditioning to be the next Captain Highliner. The group, made up of mostly families and many with accents from almost every continent, filed down to the docks, past the catch-of-the-day boats selling fresh-caught salmon, and boarded two of three boats in the Vancouver Whale Watch fleet. 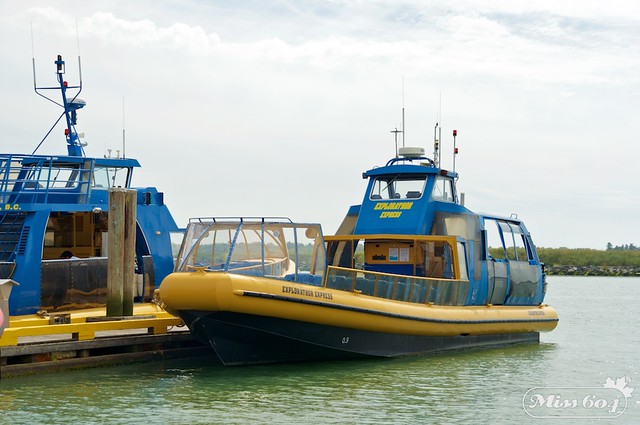 It was a very warm afternoon, with the pants and jackets making the beaming sun pretty unbearable until we started moving. Leaving Steveston through the Fraser River channel, the boat picked up speed and the breeze was delightful. I put my hand up on the side railing to allow the sea air to flow through my jacket, providing my own natural air conditioning. Our course was set for Saturna Island, where we would meet up with a pod of killer whales that were trending north from the San Juan Islands earlier in the day.

Killer Whale or Orca? When I was at the Vancouver Aquarium a few weeks ago, the guides there used Killer Whale and according to our guide on the whale watching tour, who also said Killer Whale, it is actually the preferred term in the scientific community. You can use both terms though, they are both acceptable.

On our way to Saturna, as we passed Tsawwassen, Point Roberts, and White Rock, a humpback whale was spotted. Our guide came on the boat’s loudspeaker to tell us that it was “Big Momma”, a humpback who has brought many of her calves through these waters from Hawaii over the years. While she didn’t fully breach, she did do a few deep dives and show us her immense fluke before disappearing under the water. 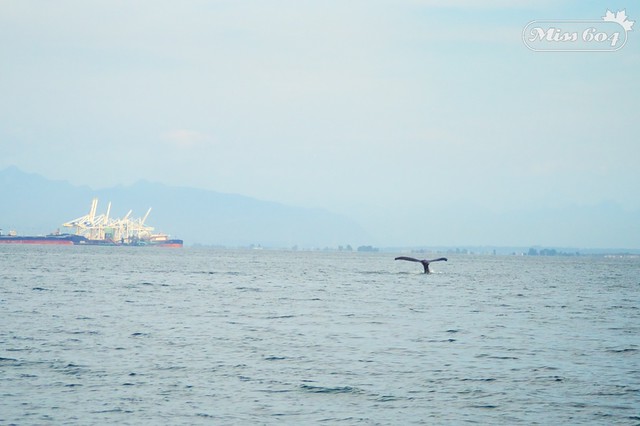 There are two types of Killer Whales that roam the waters of Salish Sea off of Washington and British Columbia, Transient and Resident:

After left Big Momma we headed south once again, between Mayne Island and Saturna Island where we spotted L-Pod. Shiny, smooth, black fins appeared between the waves and the group made an appearance. 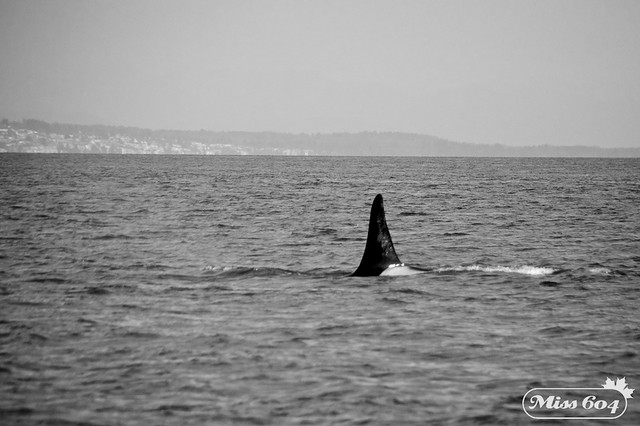 Our tour guide came on the speaker again to let us know they can be identified by their saddle patch markings, at the base of their dorsal fins. She said that there was a regular male in the group called Nigel and they made notes of who was spotted, and where, so that they can be added to the BC Cetacean Sightings Network.

The whales breached, jumping out of the water and making splashes that certainly caught our attention, even if we didn’t catch the first part of their display. Some flapped their tail flukes on the water repeatedly, or glided along the top of the water on their side, smacking their pectoral flippers along the surface. Our guide told us this is the most “playful” pod that she’s witnessed this season. 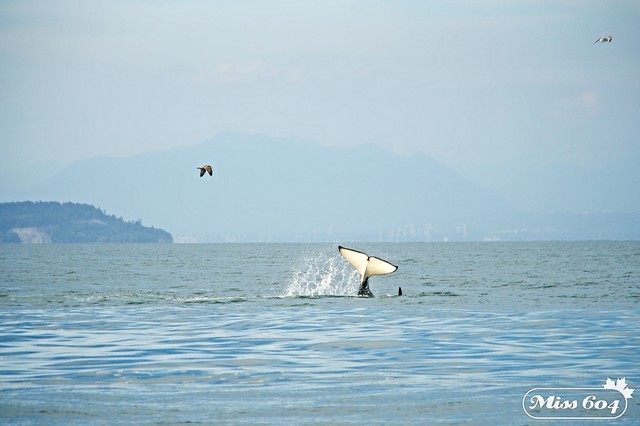 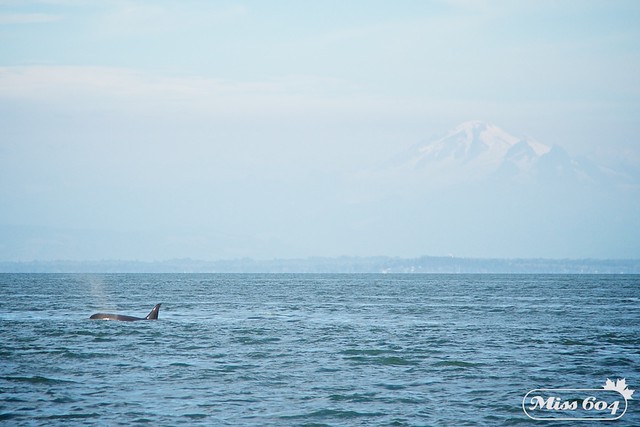 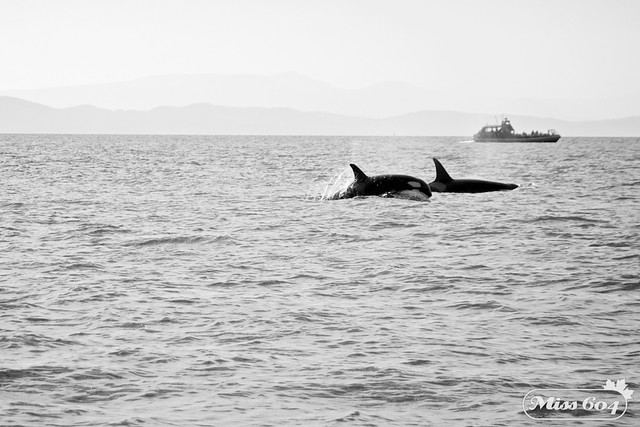 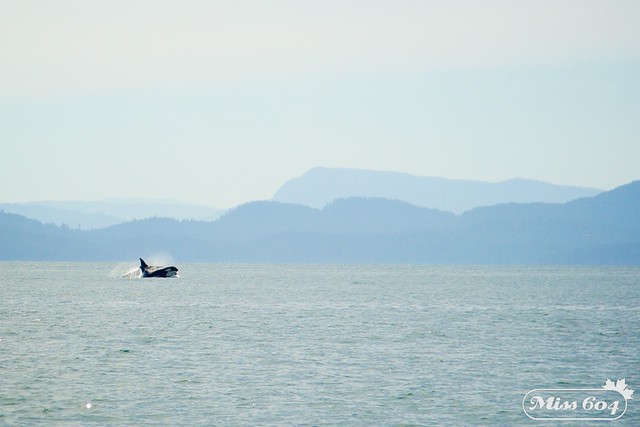 I think the whales were happy to be following their food up the strait as I saw several fish jump along our boat throughout the 4 hour tour.

By law, boats cannot be closer than 100 meters from the whales and must approach from the side, rather than from the front or the back of the pod. To reduce noise levels (which can negatively affect whales and other marine life), whale watching boats and other vessels should keep a very low speed around marine life or put the engine into neutral or idle. [Source]

Vancouver Whale Watch’s tours are guaranteed 3-5 hours and they provide bottles of water on the boat, and a restroom. You can bring your own snack but toward the end of the tour they also handed out some granola bars, which came just as my belly full from an earlier, hearty brunch was starting to rumble.

On our way back to Steveston, we took a detour around the ferry terminal and over to the Delta Port where some sea lions were sunning themselves on a massive buoy and another sat alone on a buoy by the entrance to the docks. Entering the Fraser River along the rock wall breakwater, a bald eagle looked on as harbour seals played in a tidal pool. 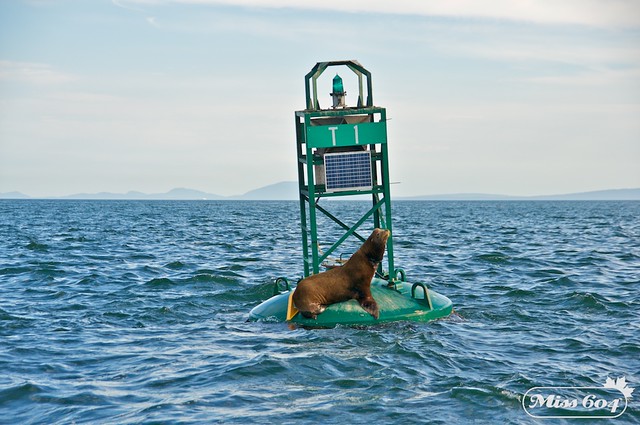 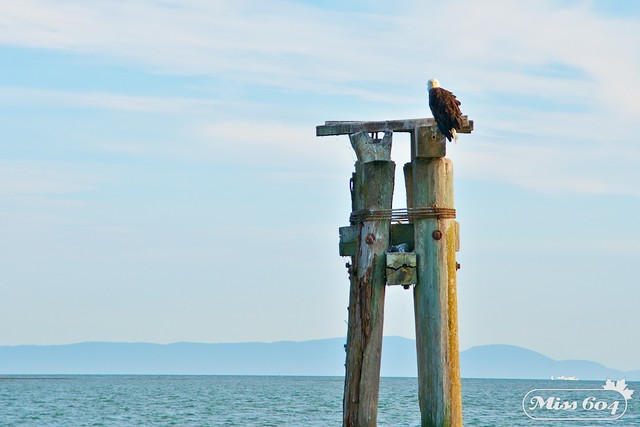 With so much wildlife viewed on this trip, and over 300 photos taken on my camera, I returned to the dock feeling excited and energized. I love simply being out on the water in our beautiful southern coastal region but seeing all of these stunning creatures in their natural habitat was such a treat.

When I got home I loaded my photos onto my computer and studied the shots. One whale that popped up near us had distinct saddle markings so I did a quick Google search for an online identification tool. I found the Whale Museum and after comparing my photo with the ones of L-Pod in their gallery, I found out that I had the pleasure of “meeting” Ocean Sun that afternoon. 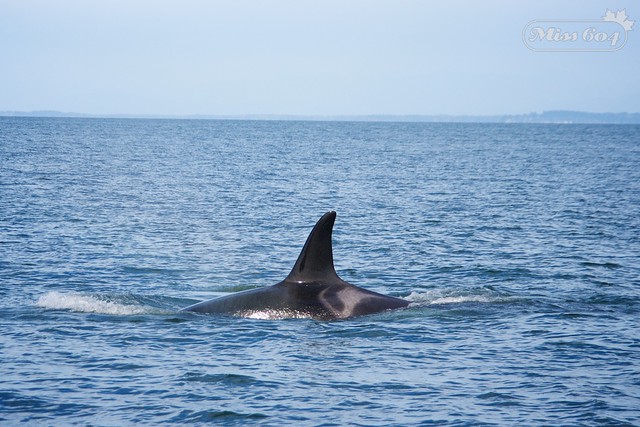 “L-25 Ocean Sun: Ocean Sun (estimated birth year 1928) has outlived her immediate family. She spends most of her time with Mega (L-41) and his sisters.” 87 years old! I was floored.

Life expectancy of a female Killer Whale is 50-90 years, and our guide did tell us earlier that day that Granny, (aka J2 from J-Pod) is the oldest whale around at an estimated age of 104. 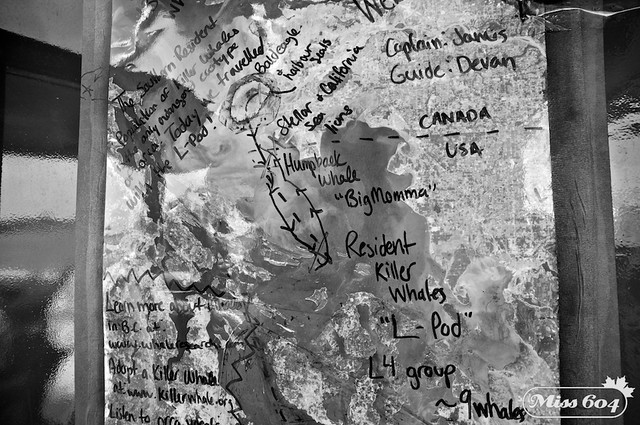 There really is no feeling like seeing these magnificent creatures in the wild and being honoured by their presence as they splash around in their home waters they share with us. To book your tour (or another amazing local experience) check out the Viator listings. They offer everything from seaplane tours and sunset harbour cruises to walking tours, beer and distillery tours, and food truck tours.