Arriving in Boston after a red-eye flight and a train from New York we were so hungry and tired by the time we checked-in at the Nine Zero Hotel that I gobbled up a Boston Bruins cupcake that was laid out as a part of our welcome amenity. Luckily, the hockey-themed pastry didn’t spoil my appetite because we were about to have a fantastic meal at over Artisan Bistro. 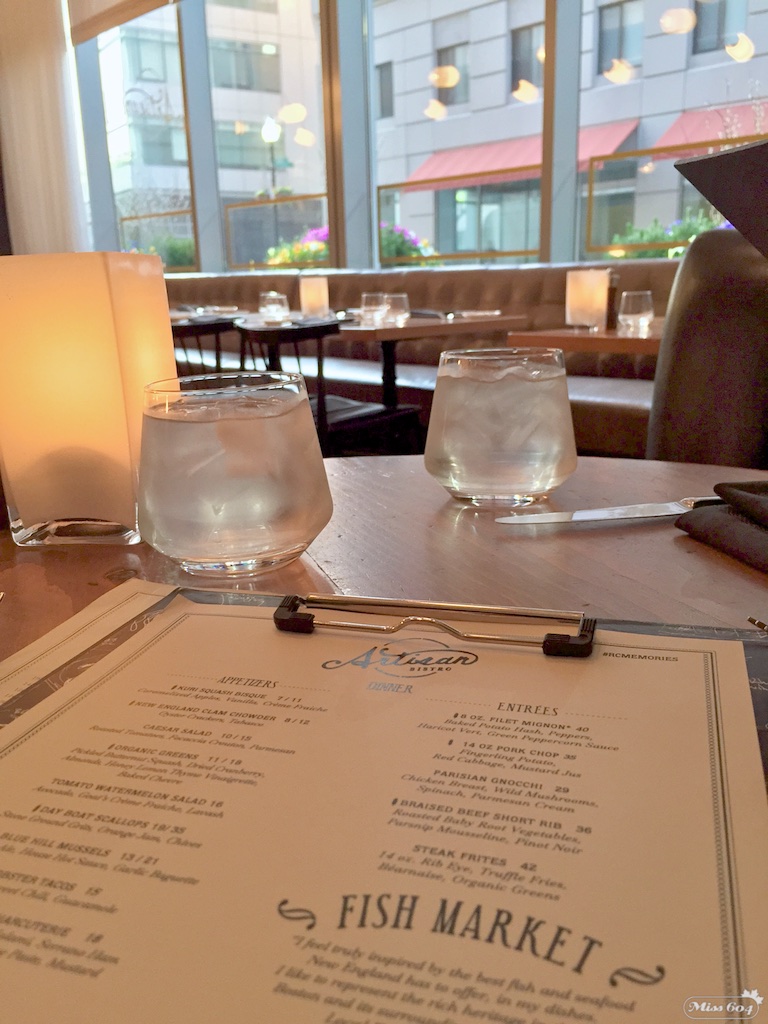 Recommended to us by our hotel, as the Nine Zero’s Highball Lounge isn’t open on Sunday nights, we walked down Tremont Street, alongside Boston Common, to Artisan Bistro in the Ritz-Carlton. Reading up about this “Modern American” hotel restaurant, at the Ritz, we really didn’t know what to expect. Would we be underdressed? Would it be a bland lobby eatery? I put on some heels, and we both put on nice jeans (not plane/train jeans) and button-up shirts for the 8 minute walk over from the Nine Zero. 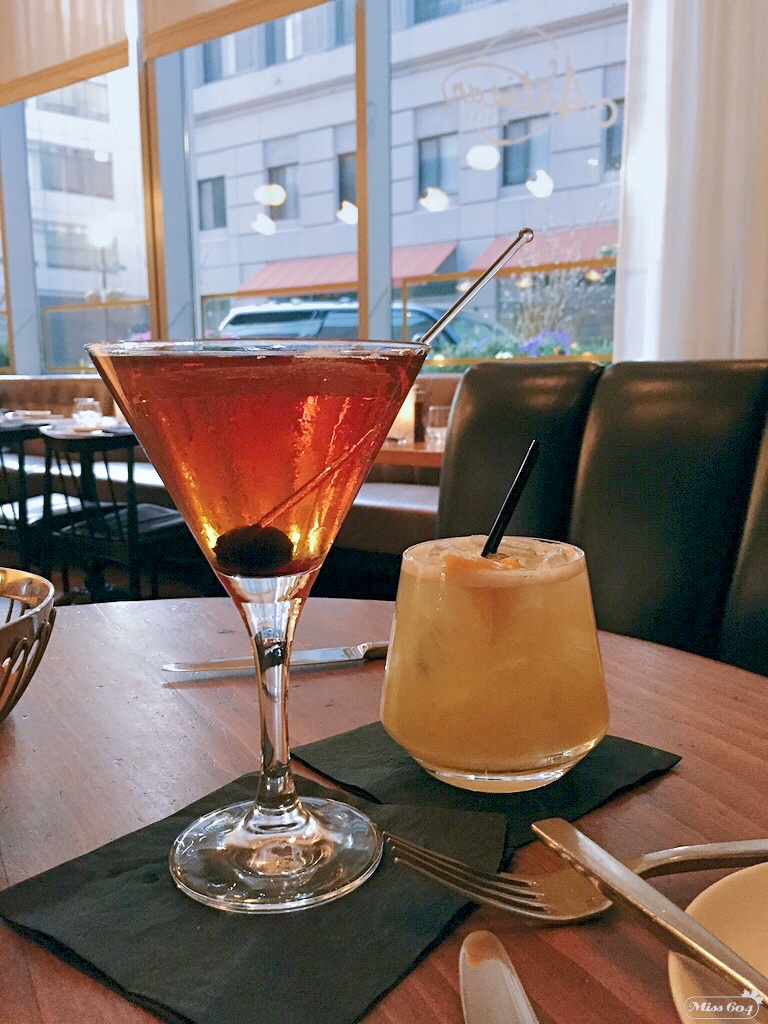 We were greeted with a smile and had our pick of table so we selected a cozy, rounded booth that looked out over the room with the bar on one side and a window view of Avery Street on the other. Our server greeted us with a handshake and a smile, and made his cocktail recommendations.

Although we were hesitant and tired, we quickly snapped out of it realizing that we were both officially on vacation for the next eight days. We picked out two drinks that perfectly fit each of us as John went for a grilled pineapple margarita on the rocks and I had the Berkshire Manhattan.

Sliding around the booth to sit practically side-by-side — yes we’re one of those couples — we slipped into “vacation mode” with each sip of our delicious cocktails.

The appetizer recommendations were next and my questions from earlier in the day about this being a run-of-the-mill lobby eatery went out the window. We were in Boston, in the spring, and the menu reflected that perfectly. Tomato watermelon salad, Blue Hills mussels, day boat scallops and New England clam chowder were among the choices listed, but when John spotted lobster tacos we were sold. 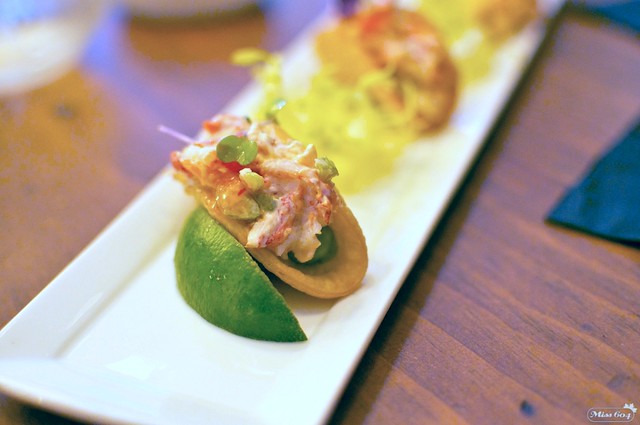 These crisp, crunchy, deep fried and puffed up shells were loaded with smooth, creamy, lobster filling. They only took two bites each to devour and three came on the plate so we split the last one, and could have done a whole other order.

The dinner menu was more of what we could have expected from a prestigious hotel such as the Ritz-Carlton: Filet mignon, braised beef short rib, Parisian gnocchi, truffled mushroom pizza. Again, being in Boston — and appreciating coastal cuisine no matter which coast we might be on — we went right to the menu section labeled “Fish Market”.

My choice was the grilled salmon with baby kale, dill pappardelle, Meyer lemon cream, and a poached egg. 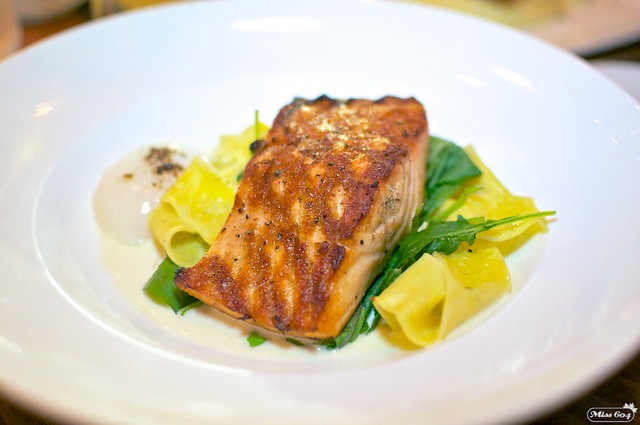 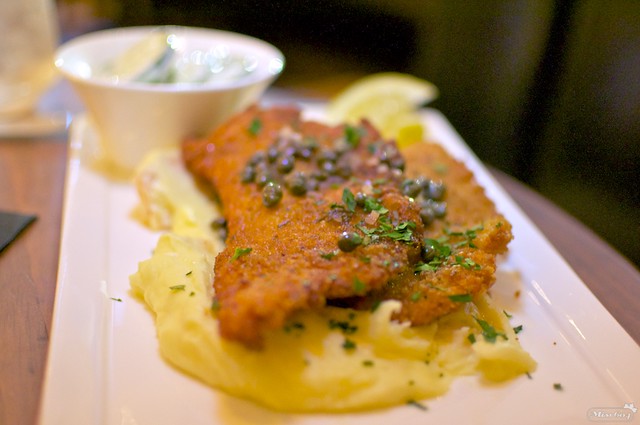 Our choices were classic dishes with noticeable Boston twists that weren’t just creative but inventive, original, and local. My first choice for an eggs benedict back home is never the smoked salmon but after having this grilled salmon with poached egg, I’m a big fan of this combination. The smokey crust of the fish, the creamy pasta and flowing yolk pierced by the fresh contrast of the kale made every bite a delight. 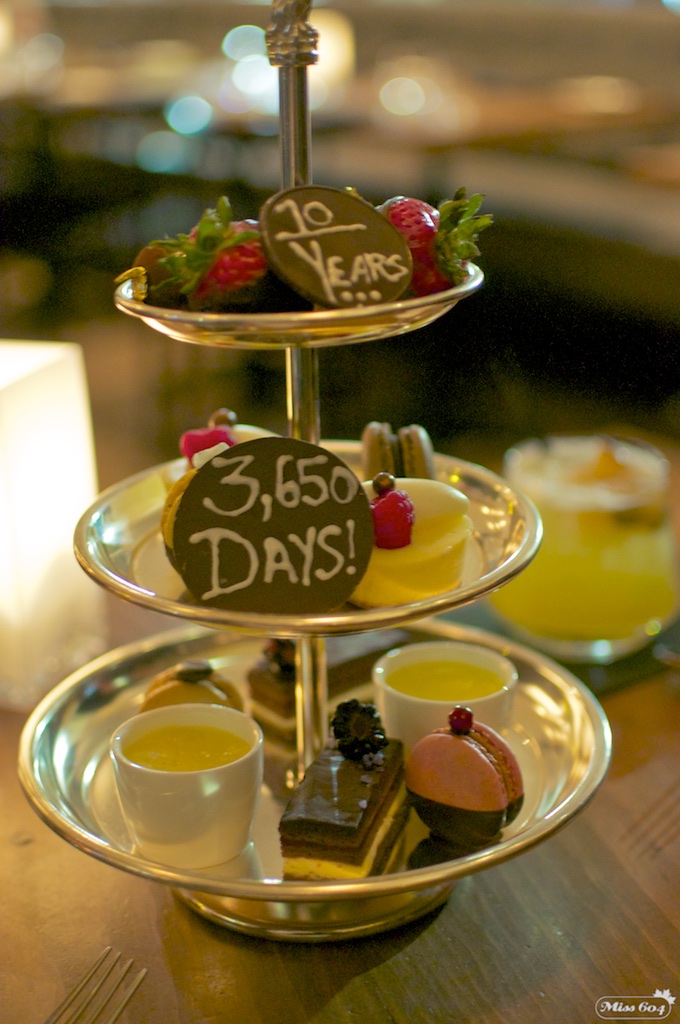 John handed me a forkful of his meal and I swear Artisan Bistro used my Oma’s recipe for their mashed potatoes. There was a hearty, home-cooked feeling to his dish served up with a fresh spike from the cucumber salad.

Our dinners complete and with fresh cocktails in hand, a tower of desserts arrived to welcome us to Boston. It was reminiscent of High Tea at the Empress in Victoria with levels and layers of various confections.

The sun had gone down and the room had filled up with an after-work crowd mixed with others enjoying a date night. The New England Sports Network (NESN) caught our eye on the TV behind the bar, making us feel better about our fairly casual dress. We sipped our drinks, discussed which dessert was best — and which we had room to finish — and savoured our first night in this very special town where we first met ten years ago.

*Upon further research about skate, since it was a new menu item for us, we discovered that some do not have a favourable rating in terms of sustainability. However, the Monterey Bay Aquarium’s Seafood Watch updated its ratings in 2014 upgrading some skate from an “avoid” to “good alternative” rating.