Those out early on the Sea Wall this morning were treated to quite the sight as four orcas were spotted in Burrard Inlet. Swimming as far up as Belcarra at the entrance to Indian Arm, and passing back through the inlet under Lions Gate Bridge, the whales made a rare appearance in the waters off English Bay.

.@VPDMarineUnit & @vanaqua biologists are monitoring a pod of orcas in the waters around #Vancouver pic.twitter.com/TpBCUb4DEX

Thanks to the VPD Marine Unit, Tessa Danelesko and her colleague Bailey Eagan with the Vancouver Aquarium Marine Science Centre were able to get on the water today to gather data on the group of orcas. They first got word of the sighting thanks to a member of the public and Tessa told me that it’s important to reach out to the BC Cetacean Sightings Network (“BCCSN”) if you do spot a whale, dolphin, porpoise, or sea turtle in nearby waters.

What to do When You Spot a Whale or Dolphin

It’s easy to report to the BCCSN and it only takes a few minutes. Once you’ve had a sighting, call 1.866.I.SAW.ONE or visit wildwhales.org to report what was spotted. Helpful information to provide includes the date, time, and location of where the sighting occurred, as well as how many individuals were seen, what type of vessel (land or boat) the animal(s) were seen from, and about how far away they animal(s) were when they were spotted. You can also report any interesting behaviour or activity. It’s helpful to pass along photos and video of the activity as well. 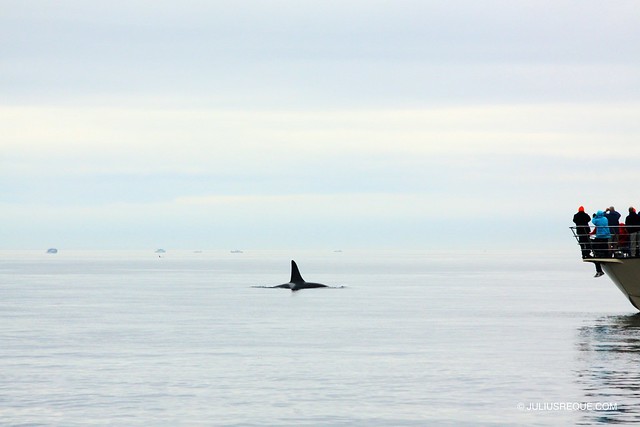 According to Tessa, the BCCSN has collected over 82,000 sightings over a 15 year period. “This data can tell us a lot about where and when cetaceans and sea turtles are spending time along the BC coast. Each year this data is shared with a number of conservation-based research projects and initiatives, and it has helped with critical habitat and recovery strategy planning for species listed as “at-risk” under the Species at Risk Act.

One of the best things about the BCCSN is that anyone can participate and directly contribute to meaningful cetacean and sea turtle research. By reporting what you see you are helping to conserve the 23 species and populations of cetaceans and sea turtles that can be found in BC waters.”

Share13
Tweet
Share
Pin
Email
Reddit
WhatsApp
13 Shares
Current Contests on Miss604
*All contests are open to residents of Canada only, unless otherwise stated. Contest timelines are published on each individual post along with entry methods. Some contests may only be open to those 19 years of age and older. Winners are announced on the contest blog posts. Contest policy »
Comments are closed on this post
Advertisement

Also on Miss604.com
« Grey Squirrels in Stanley Park
Things to do in Vancouver This Weekend »