My mom’s old Pontiac had the best radio. Big buttons, a smooth turning dial, and an 8-track player where she slotted in a cassette converter. There were many trips to school and places like Surrey Place Mall that were soundtracked by the voices of Fred and Cathy on CFUN, where the two hosted a morning show from 1984 to 1993.

The on-air pair were married in 1987 and the names “Fred and Cathy” were so frequently mentioned that I always thought they were close personal friends of my mother (and everyone else’s mother). In 1993 when the show moved over to KISS FM, as did the audience who loyally tuned in every day for Latremornings. 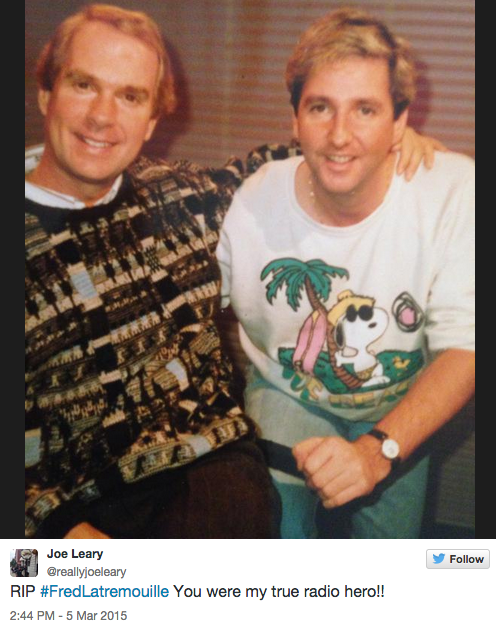 Yesterday, the news broke that Fred Latremouille passed away at the age of 69. The Vancouver radio industry expressed their deepest condolences on social media and in various articles online. It wasn’t just sadness that I was reading about, it was heartbreak and complete devastation.

To me, Fred Latremouille’s voice was my childhood, through the car stereo speakers. To others, the man himself was an iconic broadcaster and co-worker, a mentor, and a friend.

“From his earliest days as a broadcaster, Fred Latremouille was known for his generosity to fellow broadcasters, as well as his willingness to encourage aspiring young talent wanting to make it in the profession. His work for charity included starting the Pan Pacific Christmas Wish Breakfast, which helped the Lower Mainland Christmas Bureau raise funds for needy children, and has raises hundreds of thousands of dollars since its inception.

In November 2007, Fred Latremouille’s exceptional career in broadcasting was recognized by his induction into the CAB Hall of Fame.” [Canadian Communications Foundation]

Fred hadn’t been on the airways in Vancouver since 2007 but his voice is something an entire generation will remember and associate forever with their hometown.

Also on Miss604.com
« Vancouver Photos of the Week
5 Reasons to Attend a Whitecaps Match in 2015 »