White Spot’s Celebrate BC summer menu features local ingredients, seasonal dishes, and BC wine features to round out your inspired dining experience. Perfect pairing suggestions include the Lois Lake Steelhead with Warm Crispy BC Potato Salad alongside a glass of Red Rooster Pinot Gris. How about the Prawn & BC Brie Flatbread with Inniskillin Riesling or the Gala Apple & BC Brie Chicken Burger with Jackon-Triggs Rosé? 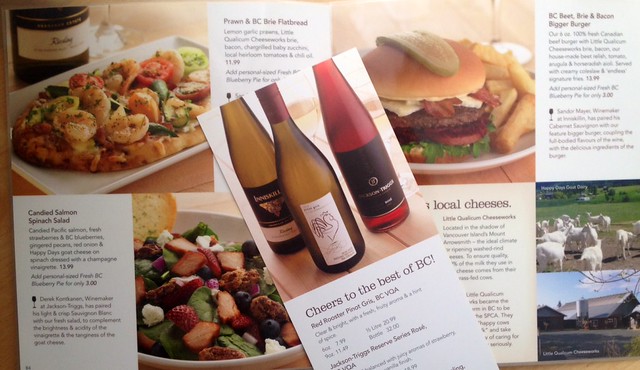 For a limited time you can also enjoy a Legendary Burger, Caesar Salad & Fresh BC Blueberry Pie for only $12.99.

Until September 7th, the Celebrate BC menu offer six seasonally-inspired creations including my favourite, the Candied Salmon Spinach Salad. White Spot uses more local ingredients than any other full service restaurant chain in the province and proudly offers a 100% BC VQA wine list. Cheese from Little Qualicum Cheeseworks, blueberries from Silver Valley Farms in Maple Ridge, heirloom tomatoes from Windset Farms in Delta, and more.

Celebrate BC at White Spot

To help you Celebrate BC at your local White Spot, I have a $50 gift card to give away along with a trio of featured BC wine from Red Rooster, Inniskillin, and Jackson-Triggs. Here’s how you can enter to win:

The bottles of wine will be delivered to the winner along with the gift card. I will draw one winner at random from all entries at 12:00pm on Thursday, August 21, 2014. Must be 19+. Please enjoy responsibly. Follow White Spot on Twitter and Facebook to keep up to date on their latest menu offerings and promotions.

Update The winner is Steve!

Also on Miss604.com
« Archive Photos of the Day: Dal Richards at the PNE
Things to do in Vancouver This Weekend »