It is the season for gift giving and gadget upgrades which is why I am pleased to offer up a special giveaway with Lenovo featuring their Yoga Tablet 8, which uses the Android operating system.

I have my own to try out so I will be providing a review later this week but in the meantime, other reviews I have found online have been positive for this very unique-looking tablet, with its best features being its amazing battery life and the easy-to-grip cylinder. The screen itself is a slim 4mm and the battery cylinder is 22mm making it ideal to use as an e-reader while having the extended capabilities of an Android tablet. 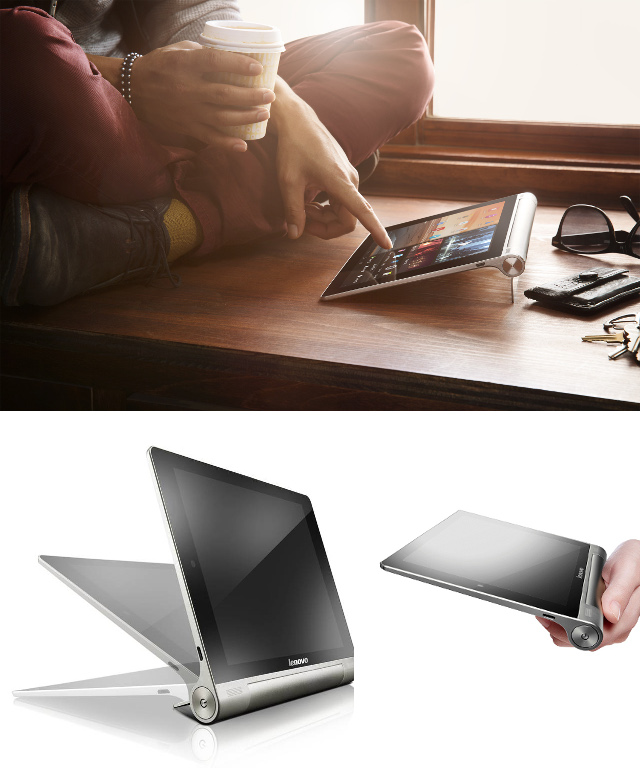 Design: Yoga Tablet 8’s pioneering design incorporates a battery cylinder and kickstand on the side of the device, shifting the centre of gravity and opening up multiple usage modes: Hold, Tilt, and Stand. In hold mode, the weight of the device falls into your palm rather than your fingers, making it more comfortable for reading and browsing. Lay it down for Tilt mode and you have a perfect viewing angle for typing or gaming. Flick the kickstand and rest it upright in Stand mode to comfortably watch videos, listen to music, or video-chat.

Epic Battery Life: Yoga Tablet 8 keeps going over the long haul with its off-the-charts battery life. Its battery lasts up to 18 hours* so you can go all day — and into the night — without recharging. The secret: Yoga Tablet’s unique, cylinder-shaped side chamber allows more room for battery storage — and more time between charges. *Battery life is an estimated maximum. Actual battery life may vary based on many factors.

Delivering great visuals with an eight-inch HD (1280 x 800) display, the Lenovo Yoga 8 will leave my lucky contest winner (or whomever they might gift it to) very happy. Here’s how you can enter to win:

I will draw one winner at random from all entries at 10:00am on Friday, December 20, 2013. Follow Lenovo on Facebook and Twitter to find out more about their innovative devices. Exact model for the giveaway is the Yoga Tablet 8 – 59387761 in silver.

Update: The winner is Victoria Denault!

Share16
Tweet
Share
Pin1
Email
Reddit
WhatsApp
17 Shares
Current Contests on Miss604
*All contests are open to residents of Canada only, unless otherwise stated. Contest timelines are published on each individual post along with entry methods. Some contests may only be open to those 19 years of age and older. Winners are announced on the contest blog posts. Contest policy »