I first met painter Andy Dixon at a pool party in the Southlands a few summers ago. 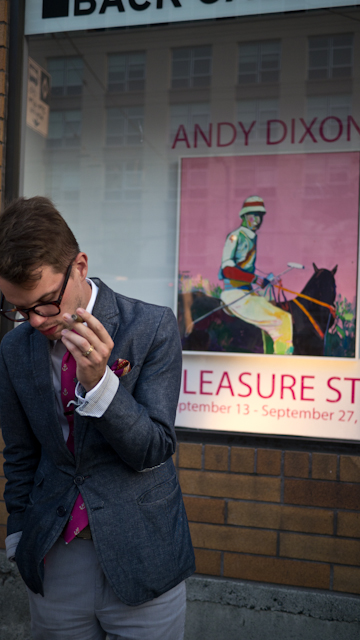 The host of the party was celebrating the completion of renovations that transformed his house into a re-imagined mid-century home reminiscent of Richard Neutra’s Kauffman House in Palm Springs — with its large glass sliding doors that opened the living spaces to an adjacent patio and pool, where Dixon was standing, with drink in hand, that Saturday afternoon.

In many ways, he the most appropriately dressed person at the party but also completely stood out–wearing what I can only describe as a re-imagined suit of luxury as though he jumped out of the pages of The Great Gatsby or a scene from Downton Abbey — only doused in bright colours, from head to toe. He was very sweet and humble and we chatted a bit.

Ever since then, I have been quietly following Dixon’s career as a painter and his work — characterized by bright and bold colours, primarily using oil and pastel on canvas. Last week, I attended the opening of his solo exhibit, Pleasure Studies, at the Back Gallery Project — a recently-opened new gallery space on East Hastings. This is where I learned that re-imagination and reconstruction are not just themes in Dixon’s work, but also his life.

Dixon began his artistic career as a musician in punk bands in the early 90s, and gained notoriety as a member of the punk band d.b.s. He also was a member of Red Light Sting, and moved on to do solo work, releasing an album entitled Secret Mommy. It was during his early years as a musician that he started to dabble into visual arts.

“I was in bands in high school and started painting my bands’ album covers. Other bands would be like ‘Oh can you paint ours’ and it sort of started from there. As these bands got larger, I did too.”

After participating in a group exhibit organized by a friend at the Misanthropy Gallery (Drawing for Cash: a Johnny Cash Tribute) in 2004, Dixon was asked by the gallery to put up his first solo show entitled “Crime” there. Since then, he has participated in at least a dozen solo exhibits (and more group exhibits), but it wasn’t until four years ago that Dixon decided to devote himself to painting full-time, feeling the need to take a step away from the music world. “I toured four months for years and it wasn’t packing the same punch as it used to,” he said. 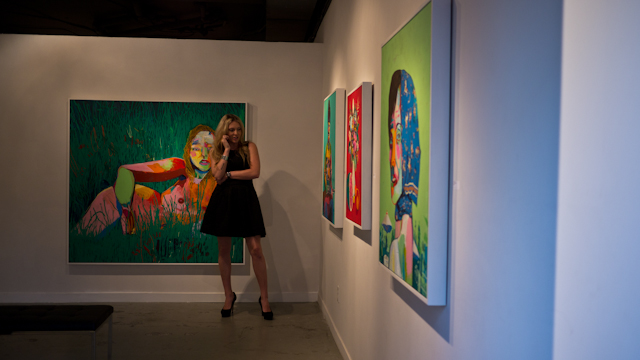 For Pleasure Studies, which is part of an ongoing themes in his current work, Dixon explores desire and sensation by painting fictional characters of (for example) polo players, ladies lounging, and exotic pets. Through this work, Dixon is not just challenging his own preconceived beliefs around money and luxury, but also those of his peers and the audience.

“I grew up in the 90s punk scene and there is this big idea of selling out…that if money is your motivation that you were suddenly living an inauthentic life,” he said. “ It’s so easy to villainize people with money and this series is my way to challenge this notion.”

Pleasure Studies runs its final week this week at the Back Gallery Project (602 E Hastings) until September 27, 2013. Starting October 3rd, the gallery will be exhibiting work by Vancouver photographer Holly Marie Armishaw. Follow Andy Dixon on Twitter and Facebook to learn more about this work.