Vancouver Bach Choir presents Phantom of the Opera for one show only on Saturday, April 20, 2013 at 8:00pm at The Orpheum. This specially commissioned work from Canadian composer Andrew Downing was created to underscore and enrich the legendary silent film of the same name. The choir and a hand-picked chamber ensemble will perform the score while the cinematic masterpiece screens. 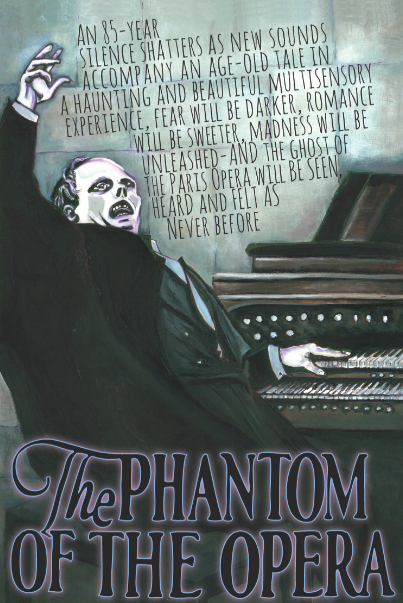 Audience members will relive the terror, heartache, and romance of The Phantom of the Opera as a crisp print of the film is projected within the Orpheum concert hall. Released by Universal Pictures in 1925, Rupert Julian’s masterpiece is held to be one of the best horror movies ever created; its success would prompt the studio to finance a legendary string of monster features including Dracula, Frankenstein, The Wolf Man, and The Mummy.

Lon Chaney’s performance as the Phantom remains harrowing, despite nearly a century passing since its first haunting screening (at which time the famous unmasking scene was said to have made patrons faint and scream).

The Orpheum is the perfect venue for this combination of classic film, choir, live music, and multimedia. Tickets for Vancouver Bach Choir’s Phantom of the Opera are on sale now for $25 to $59 (plus fees, taxes; student and senior discounts available) and can be purchased online, in person at the Orpheum box office, or by calling (604) 696-4290.

I have a pair of tickets to give away for this performance. Here’s how you can enter to win:

RT to enter to win tix to @VanBachChoir’s Phantom of the Opera from @Miss604 http://ow.ly/jFmdz

I will draw one winner at random from all entries at 12:00pm on Tuesday, April 9, 2013. The winner will receive a pair of tickets to the performance on Saturday, April 20, 2013 at 8:00pm. Follow the Vancouver Bach Choir on Facebook and Twitter for performance information and show news this season.

Update The winner is Neal Hannah!

Also on Miss604.com
« Tulips of the Valley Festival 2013
Fun. with Tegan and Sara at Ambleside West Vancouver »