As a child growing up in Surrey — the former city of parks — walking trails, forest explorations, and playgrounds were what made me the most happy on a warm spring day. Winter is gone for another year and that means I need to dust-off my Metro Vancouver Park Series to showcase more great green spaces in our region starting with today’s feature: Peach Arch Provincial Park. Basics
Peace Arch Provincial Park is located at the Canada, USA border crossing in South Surrey with a total of 16 hectares of space, 9 of which are on the Canadian side.

How to get there
Take Highway 99 South toward Blaine, Washington. The highway will turn into the Peace Arch border crossing and then into Interstate 5 in Washington State. To get to the park, you’ll want to turn off the highway before you get to the border. Turn right at Beach Avenue (there will be signs) and you’ll find the parking lot.

The Arch was constructed to commemorate the centennial (1814-1914) of the signing of the Treaty of Ghent on December 24, 1814. The Treaty of Ghent ended the war of 1812 between the United States and Great Britain, a conflict that was waged in North America and involved Canadians, as well as Americans and British. [source] The Peace Arch, dedicated in 1921, was the first such structure in the world. It was built on the International Boundary between Canada and the United States to commemorate the lasting peace between the two countries. School children from the United States and Canada donated money for the purchase of the land surrounding the Peace Arch and in 1939 the Canadian portion of the Peace Arch Park was officially dedicated. [source]

Features
The biggest attraction is the Peach Arch itself but there is a vast lawn, picnic area (with 42 tables), picnic shelters, playground, and full washrooms. You can book the picnic shelter (for a fee) between April 1 and November 15 by calling (604) 541-1217. The landscape is beautifully decorated with flower gardens, a lily pond, and capped off with views of Semiahmoo Bay. Pets are allowed but must be on-leash. 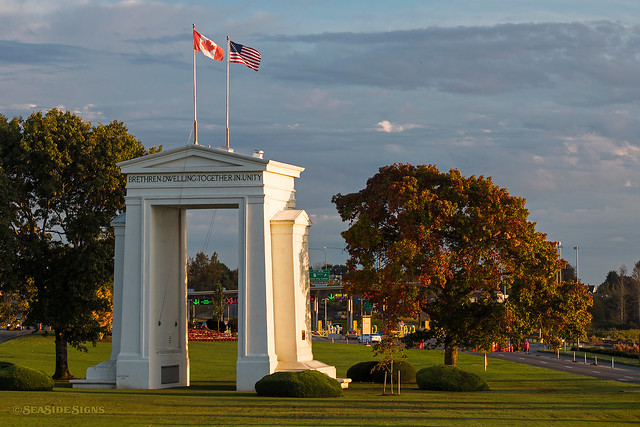 Since park visitors will technically be picnicking and romping on the grass of no man’s land between the two countries, you may be asked to provide identification if a border officer requests it. Also of note, there was construction affecting access to the Arch field but it should be completed this season.

Find more parks by browsing all 38 entries in my Metro Vancouver Park Series.