This feature was written exclusively for Miss604 by actor, writer, and producer, Michelle Kim.

Last Wednesday, I attended the Artist’s Circle at the Harmony Arts Festival, hosted by the West Vancouver Museum. The event was an intimate retrospective of famed-Canadian painter, Gordon Smith, now 92 years old, who was joined by two other distinguished Canadian artists, from two other generations—Ian Wallace and Douglas Coupland. 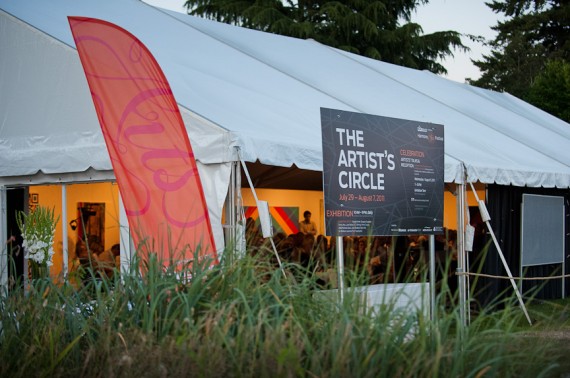 The evening was structured around Smith’s personal photographs (dating back from the end of World War II up to present day) being projected on the screen to the right of the speakers. My favourite photograph was that of Arthur Erickson standing outside in a bathrobe with Margaret Trudeau and a young Justin, looking off through West Vancouver foliage over to the sea. Each photograph had a wonderful story behind it and served as a sort of time-capsule of Canadian history, and led to discussion about other topics that Wallace and Douglas helped expound on, including art, artists, West coast art, and in particular, West Vancouver—a place all three artists call or (have called, in the case of Wallace) “home”.

Over the course of the evening, it became clear that all three artists are close friends, each serving as a mentor to one another is various ways. Both Coupland and Wallace not only spoke of how much they revere Smith’s work but also how much they look up to him as a human being because he is so kind. Smith and Coupland talked about Wallace’s work ethic and talent (Wallace was in fact Coupland’s instructor while he was studying at Emily Carr) and both Smith and Wallace praised Coupland for his work with various mediums including print and for his innovative approach to art—mention Coupland’s piece that was hanging in the tent based on QR codes.

Though these three artists are from different eras and often work different mediums, there were moments where the boundaries of generation and art forms collapsed. At one point, Smith spoke of how his painting really changed with the advent of digital cameras—which he uses often to take pictures and paints from by looking at them. 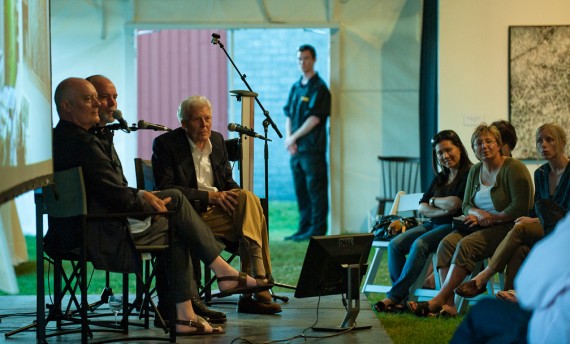 The Showcase Exhibition in the festival tent was amazing, featuring the works of the three artists speaking as well artists such as Pierre Coupey and Attila Richard Lukacs.

Visit the West Vancouver Museum to see the works of Gordon and his late-wife Marion. The exhibition runs until August 27, 2011. Follow the museum on Facebook or read their blog for more information.