Director Rachel Ditor’s interpretation of The Merchant of Venice is probably one of the best productions I’ve ever seen at Bard on the Beach Shakespeare Festival, now in its 22nd season. Ditor clearly translates the text into fantastic direction for her actors, all of whom give outstanding performances. 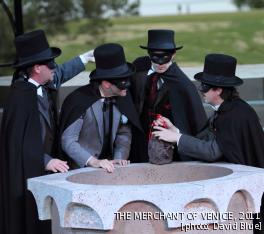 The story follows Bassanio (Charlie Gallant) who asks his older friend, a merchant named Antonio, for money so he can pursue a wealthy heiress, Portia (Lindsey Angell). But since Antionio’s money is tied up in ventures at sea, Antonio borrows the money from Shylock (Richard Newman) for his friend, signing a contract to repay the money within three months or give Shylock a pound of his flesh. What ensues is a funny, touching story about love, friendship, and the values that define us, in the end, even when our lives are at risk. Though, the anti-Semitic undertones (or overtones) made me uncomfortable at moments during the play (Elizabethan England was incredibly anti-Semitic), the play definitely provoked a lot of thought about tolerance, eloquently expressed near the end of the play in Shylock’s famous soliloquy, which brought tears to my eyes. Considering such themes of tolerance and acceptance, Ditor aptly set this production in the 1870s, around the time of the unification of Italy.