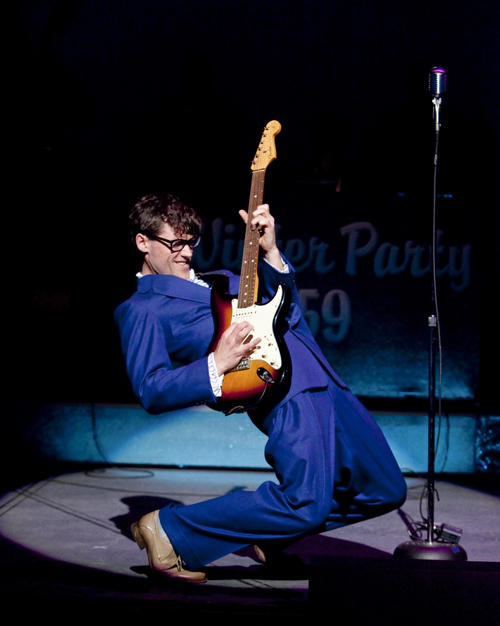 The Arts Club presents Buddy: The Buddy Holly Story at the Stanley Theatre on now until July 12, 2010.

It’s the world’s most successful rock ‘n’ roll musical and has been viewed by more than 20 million people across the globe.

â€œPeggy Sue,â€ â€œThatâ€™ll Be the Day,â€ â€œOh Boy,â€ â€œNot Fade Awayâ€â€”the list of hit songs penned by Buddy Holly goes on and on. By his untimely death, the legend had already changed popular music forever.

Vibrant and celebratory, Buddy: The Buddy Holly Story highlights the talent and passion that lives on in his music and continues to thrill audiences long after they dance out of the theatre.

I have two tickets to give away for the performance May 27th and I also have a special dinner pairing to offer as well.

The winner of this prize will enjoy a four-course meal for two at West, a South Granville restaurant that recently won Gold for Best Service, Bronze for Restaurant of the Year, and Bronze for Best Last Course per Vancouver Magazine.

Dinner at West will be arranged for 5:00pm on the 27th so that the winner and their guest may enjoy their meal and then head across the street to see the musical at the Stanley.

To enter to win please leave a comment on this post. I’ll draw the winner Monday May 24th.

Update May 25th I drew the winner’s name randomly and it was… Lacy. Congratulations and have a fantastic night out! I’d like to thank everyone for sharing their stories and experiences, it was so interesting to read all the entries. Please do get some tickets for the show if you can, it will be amazing.

Fine print: The approximate value of the dinner for two is $150 (beverages & gratuity are additional).