I’ve had Stanley Park in my backyard for the last 15 years and walking its 20km+ trail network is a favourite pastime (see: this post, this one, and this one). Following that hike up with a pint from the Prospect Point Cafe, which is now open again, is another favourite.

The great thing about Stanley Park’s trails is that they’re all on Google Maps, so really, you don’t need this blog post for me. However if you’re reading this, you probably Googled how to walk to Prospect Point so I shall deliver instructions based on some of my favourite paths:

How to Walk to Prospect Point

From the #19 Bus Loop/Rose Garden – The Creek Trails
Distance: 2.4km
Elevation Gain: 58m
Estimated Walk Time: 31 mins
If you’re coming from the bus loop, the Pavilion, or the Rose Garden, you can enter the trail network from the South Creek Trail (near the Shakespeare Garden). There are a few more turns on this route, from South Creek to Beaver Lake, head west then cross Lake Trail to join up with North Creek Trail. At the top of North Creek you will join up with Stanley Park Drive and walk across the overpass where many photos like this are taken: 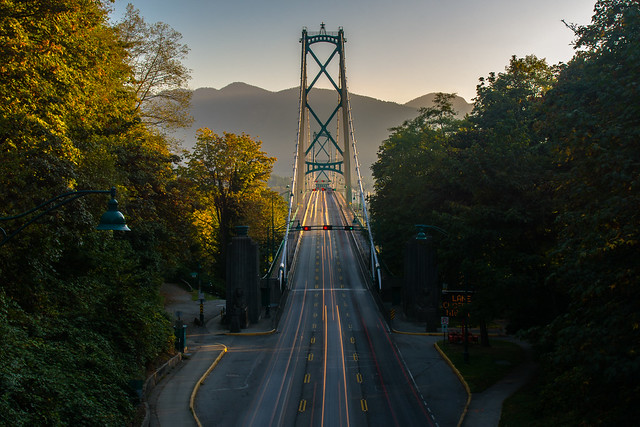 From the Seawall – Since there’s quite an elevation gain, there are a few trails up from the Seawall but they’re much more steep than the other entry points. However, they’re there so here’s how to get up to the point:

From the Seawall’s north east side, hop onto the Avison Trail, near the intersection of Pipeline Road and Stanley Park Drive, which will wind you right up to the top. There’s an unnamed path that branches off to take you under the Lions Gate, which will get you there in 700m. If you take Avison all the way up to the overpass, it’s a 1.2km route.

From the Seawall’s north west side, walk up from the Third Beach concession where you’ll find three options: There is a Third Beach Trail which will lead to Stanley Park Drive, which you can cross at Hollow Tree, take Rawlings Trail, and join up with Bridle Path.

Merilees will take you to a fork in the path, you can take the lower route (Siwash Rock Trail) which is very up and down but also very scenic and worth the rollercoaster climb. Merilees, right at the fork, takes a higher route. Both are 1.6-1.8km with 20-22 mins to reach Prospect Point.

There are many, many combinations of routes to take in the park but these are just some of my favourites, and some of the most direct.

Share7
Tweet18
Share
Pin1
Email
Reddit
WhatsApp
26 Shares
Current Contests on Miss604
*All contests are open to residents of Canada only, unless otherwise stated. Contest timelines are published on each individual post along with entry methods. Some contests may only be open to those 19 years of age and older. Winners are announced on the contest blog posts. Contest policy »

Also on Miss604.com
« Britannia Mine Museum Summer Exhibit & Enter to Win
This Crazy Show at the Queer Arts Festival »