My Facebook memories in April are filled with photos of John eating garlic fries at opening day games and I have come to the realization that I truly miss baseball. When I came across a Vancouver History milestone recently, about Vancouver’s Mr Baseball, I knew I had to write about it: 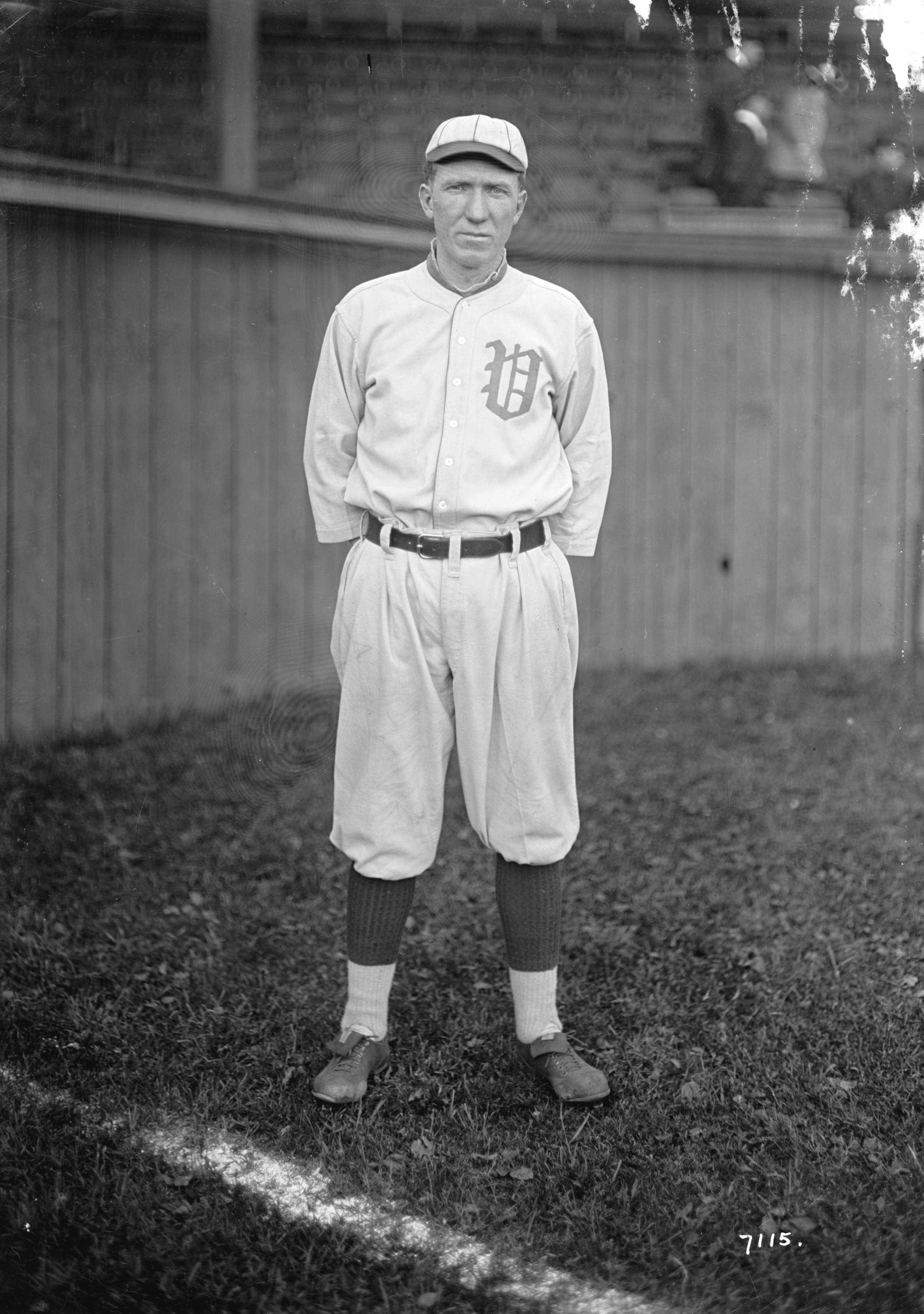 From the BC Sports Hall of Fame:

Known as Vancouver’s Mr Baseball, Bob Brown’s contribution to the sport span 60 years in the Pacific Northwest. He was a successful athlete at Notre Dame University in the 1890s, and a pro ball player from 1900-09 in Montana, Oregon, and Washington, the latter where he led the Spokane Indians to the Pacific Coast League pennant win in 1908.

He became the owner manager of the Vancouver Beavers who after several metamorphoses over the years, have become the successful Vancouver Canadians. Brown was also responsible for the first night games played under lights in Canada. Brown was the first to be inducted into the BC Baseball Hall of Fame.

He opened Vancouver’s Athletic Park, after physically clearing the site himself with pickaxe and dynamite. Athletic Park burnt down twice over the years in 1927 and 1946. Opening day saw a crowd of over 6,000. Under Brown, the Beavers won the pennant in 1911, 1913, and 1914 and in a new league (Western International League), won again in 1922, their last season.

In 1939, with the help of Capilano Brewery, Brown purchased the Vancouver Capilanos from Con Jones. In 1945, he sold the ball club but stayed on as vice-president and general manager. Brown served as president of the Western International League from 1938-53.

“The baseball fan is born every spring,” is a Bob Brown quote. It’s true. When he passed away in 1962, the Vancouver Sun ran this obituary, written by Dick Beddoes:

In the big picture of Vancouver baseball Bob Brown was a player, a manager, a scout, a club owner, a league president, a member of the minor leagues’ executive council. He operated teams in Vancouver continuously in Vancouver from 1910 to 1953. He was revered as a shoestring operator, a shrewd promoter who held his franchise together with bailing wire and bank notes and hope. He was the sole survivor of that breed of independent storekeepers—Charlie Graham in San Francisco, Clark Griffith in Washington, Connie Mack in Philadelphia. They were tough men, gallant, proud, tight-fisted, desperately durable, always close to the line of extinction. They work skilfully, against the odds, to keep their clubs alive.

It is not the privilege of any mortal to suggest that another has lived for too long, but for those who knew and necessarily respected him, it is difficult to regard Bob Brown’s last years as part of a life that was a Vancouver legend in our time.

Clancy Loranger wrote in The Province:

“The story of Robert Paul Brown’s life is inseparable from the history of baseball in Oregon, Washington and Vancouver, with a side-trip into Montana.”

I read on to discover that Bob Brown was born in Iowa*. Iowa! I have long attributed my affinity for baseball to Iowa. John grew up just 20 minutes from the Field of Dreams movie site and I have visited many times over the years. In 2009 I wrote about the “Field of Dreams Vancouver-Iowa Connection” seeing as how WP Kinsella, author of Shoeless Joe, which went on to become Field of Dreams, lived in BC. Even now, thoughts of sitting on the grass by the rows of stalks gives me chills, I can smell the sweet corn.

To borrow a line from Field of Dreams, “America has rolled by like an army of steamrollers. It’s been erased like a blackboard, rebuilt, and erased again. But baseball has marked the time. This field, this game, is a part of our past, Ray. It reminds us of all that once was good, and that could be again.”

The obituary in the Sun ends with a description of when Brown was inducted into the Vancouver Baseball Hall of Fame in 1960. He stood in front of a crowd of 3,233 at Cap Stadium (now Nat Bailey) and said:

“My friends — that’s a fine phrase, ‘my friends’, it’s worth all the million dollars in the world.” There were cheers when he hailed Vancouver as “a grand city and going to be a great one.” There was a long minute of applause when he finished with “… And I’m glad I’ve been able to give Vancouver baseball fans, and their kids, something they’ll always remember.”

Bob Brown’s legacy lives on through the multi championship-winning Vancouver Canadians and the mascot named in his honour: Bob Brown Bear.

*REQUEST FOR INFO: The Vancouver Sun Obituary states that Brown was born in Glencoe, Iowa, which currently does not exist but I have been able to find a record of it in the Audubon County Journal (1920). Another article from The Province in 1952 says he was from Blancoe, Iowa, which is also not found on any map. The closest I can find is Blencoe, Iowa.

Brown’s Wikipedia page, and the Canadian Baseball Hall of Fame say he was born in Scranton, Pennsylvania. If you have any insights about Bob (Robert Paul/R.P.) Brown’s birthplace, it would be greatly appreciated!

UPDATE! A family member had reached out and confirmed it was Blencoe, Iowa:

“Yes, the family did settle in Blencoe, Iowa. Uncle Bob was the next to youngest of eight children of Anthony and Julia Manly Brown, who were from County Mayo, Ireland, where their first two children were born, and in 1865, immigrated to Scranton, PA, where the remaining children and Uncle Bob was born in 1869. They moved to Blencoe, Iowa in 1880, where they raised their family and Uncle Bob began his Field of Dreams.”