It’s a pretty rare thing these days to have a sporting venue named after an actual person and not a car manufacturer, internet company or soft drink, but what makes Nat Bailey more than a baseball stadium and the namesake of a Pale Ale at White Spot? 1956 President of the Junior Chamber of Commerce presenting an award for the cleanest kitchen to Nat Bailey for the White Spot. VPL Number: 83008. Photographer: Vic Spooner.

In 1924 Nathaniel Bailey (originally of St Paul, Minnesota) drove around to local baseball games in Vancouver, selling peanuts and refreshments to the crowds. He, “transformed his 1918 Model T truck into a travelling lunch counter, parking every Sunday at Lookout Point on SW Marine Drive… …a dime for a hot dog, a nickel for an ice cream.” [VancouverHistory]

Four years later Bailey opened the first White Spot Barbecue with its main feature – the car hop service located at 67th and Granville. Nine years later he replaced it with the White Spot Restaurant and Drive-in. 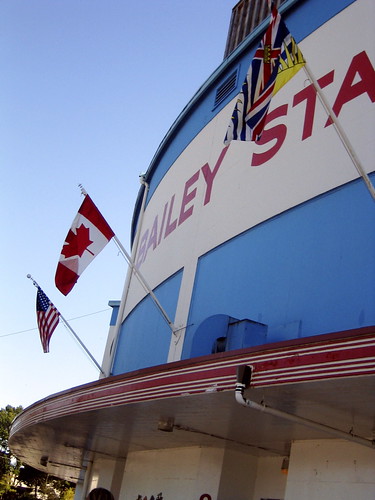 Unfortunately in 1986 this original location burned down, “One of the city’s most beloved buildings, White Spot #1 was more than a restaurant to the people who had grown up with it. As it burned beyond repair, crowds stood on the street with tears in their eyes. Rush-hour traffic in south Vancouver came to a halt, and for a month afterwards, a solemn procession of cars passed through the deserted parking lot.” [WhiteSpotFAQ]

The Vancouver Mounties, who played at Capilano Stadium built in 1951 (on the edge of Queen Elizabeth Park) were sold to local businessmen in 1956, Nat Bailey being one of them. “The Mounties played in the Pacific Coast League from 1956 through 1962 as the relocated Oakland Oaks franchise, and from 1965 through 1969 when the Dallas Rangers moved back to Canada.” [wiki]

In 1978 Cap Stadium, with its new PCL team the Vancouver Canadians, was renamed in Nat’s honor after his passing that year.