One the fiercest rivalries in women’s sport returns to Vancouver as Canada Soccer’s Women’s National Team faces USA at BC Place on November 9th. This is your opportunity to cheer on Canada’s Olympic soccer heroes as the play on home soil! 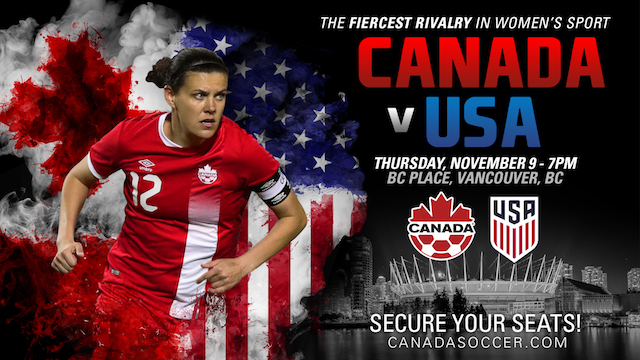 When: Thursday, November 9, 2017 at 7:00pm
Where: BC Place, Vancouver
Tickets: Starting at $20, tickets are still available online.

With Canada determined to reach the top of the FIFA world rankings, the battle between the world’s top ranked USA and fifth ranked Canada is a highly anticipated match-up. 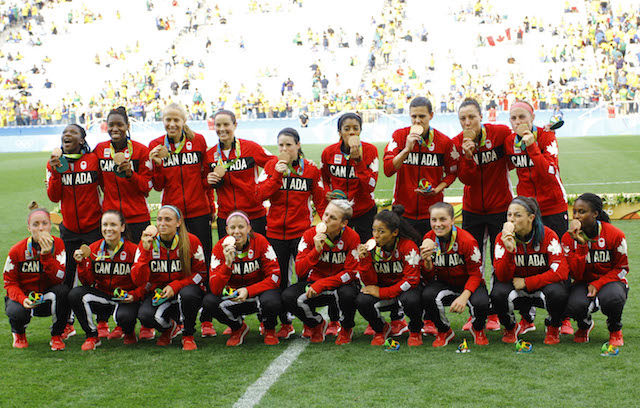 The Canadian team is coming off back-to-back Olympic Bronze Medals having won in London in 2012 and then repeated at Rio in 2016 and is led by inspirational captain and Vancouver native Christine Sinclair.

The Canada v USA rivalry has had a number of epic moments down the years, with none larger than the 2012 London Olympics semi-final where USA beat Canada 4-3 in extra time in controversial fashion. Christine Sinclair scored three goals for Canada that day as more than 10 Million Canadians tuned in to watch the game.

I have a VIP Canada Soccer prize package to give away that includes 4 BC Place Club Seats for the match and 4 Canada Soccer scarves. Here’s how you can enter to win:

I will draw one winner at random from all entries at 12:00pm on Thursday, November 2, 2017. Follow Canada Women’s National Team soccer updates on Facebook and Twitter with tag #CanWNT and #CanadaRED.

Update Jodi P. is the winner!

Also on Miss604.com
« Only Drunks and Children Tell the Truth by Drew Hayden Taylor
Variety Week on Global and Variety Week Street Festival on Friday »