The Matinée, roots rockers from Vancouver who are up for Rock Album of the Year at the Western Canadian Music Awards, are hosting a homecoming show and album release party at the Fox Cabaret on August 10th. Currently touring throughout Ontario, group is celebrating the release of their latest album, Dancing On Your Grave, featuring the hit Blood Alley and title track Dancing on Your Grave. 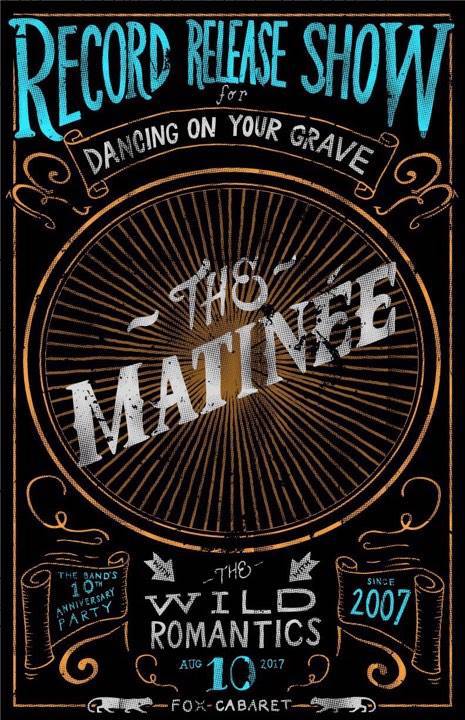 Matt Layzell, Matt Rose, Peter Lemon, and Geoff Petrie were high school cohorts before their musical paths intertwined, having spent their first few years as a band cutting their teeth on the road. They become familiar faces at every small bar and venue around their hometown of Vancouver, and they honed their chops playing small clubs nationwide.

Things changed in 2013, when the group signed to Light Organ Records and released its debut album, We Swore We’d See the Sunrise. In 2015, they linked up with Mounties members Steve Bays (Hot Hot Heat) and Ryan Dahle (Limblifter) who produced the 2015 EP Broken Arrows and helped to nurture the ensemble’s gritty rock influences. The result; the first single off the record, Temper Temper, hit #1 on the CBC Radio 3 national charts.

The Matinée’s latest full-length represents the triumphant culmination of its achievements to date. A heart-swelling collision of hook-infused rock and earthy roots influences, the album was produced by Jamie Candiloro (R.E.M., Ryan Adams) and recorded at Light Organ’s own 604 Studios.

I first crossed paths with the band in 2008 and have been a fan ever since. This incredibly talented group can rock any stage, and they have the biggest hearts! I’m thrilled to be able to offer up 2 tickets to their album release party. Here’s how you can enter to win.

[clickToTweet tweet=”RT to enter to win a pair of tickets to @thematineemusic’s album release party http://ow.ly/TpDc30e0hxL” quote=” Click to enter via Twitter” theme=”style6″]

I will draw one winner at random from all entries at 12:00pm on Friday, August 4, 2017. Follow The Matinee on Facebook and Twitter for far more information about the band and where they’ll be touring this season.

Update: The winner is Rhea!

Also on Miss604.com
« The Queen’s Baton Relay and Block Party in Vancouver
Wetlands at Work in Stanley Park »