Harrison Hot Springs Resort is a popular getaway destination within a short drive from Vancouver and they’re offering up some great deals on packages this season. Not only do the packages include your stay at the resort, with the world famous hot springs pools, they bundle up adventures with the lake’s water park, river rafting, kayaking, bumper boats, waterslides, and more!

Water Park Family Package
For family fun this summer, try our Water Park Package. It’s full of activities on the lake and in our hot spring pools. This package includes a pizza dinner one evening and breakfast both mornings, so your family will have plenty of time to enjoy fun activities and quality time spent together.

Package includes:
Two nights’ accommodations, Sunday through Friday
Buffet breakfast each morning in the Lakeside Café
Room-service pizza dinner one evening per room
Inflatable Water Park passes* and bumper-boat rides at Harrison Watersports per room
Unlimited family fun in our hot springs pools
*Please note for Water Park, Children 5 and under are not allowed and Children 6-9 years old must be accompanied by an adult.

Kayak Family Package
Don’t just look at the lake from the shore – get in a kayak and paddle around our waterways with your family. Kayaks, paddles, life jackets and instructions will be provided in your guided two hour adventure. With the addition of breakfast and fun in the hot spring pools it makes for a great midweek family getaway! 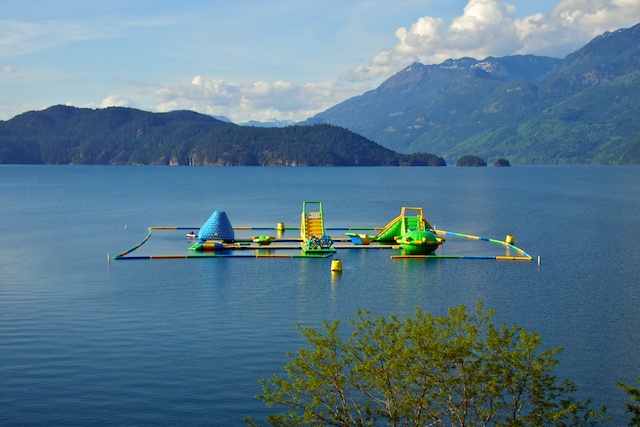 Kids Summer Soaker
Enjoy fun in the sun during the summer months at Harrison Hot Springs Resort. Our lakefront location provides the perfect place to enjoy a sandy beach, build sandcastles or splash in the clear lake water. Or come to one of our hot mineral pools for a soak or a swim with your own Gelato from Miss Margaret’s Cafe.

Get Wet Family Package
When summertime rolls around, we have a family package that will cool you off. Along with the hot spring mineral pools, this package includes bumper-boat rides and waterslide passes. Enjoy buffet breakfast each morning and room-service pizza dinner one evening to complete your family getaway.

Family package rates are based on two adults and two children 16 and under. Rates flexible for other family sizes. Check the website for full package rates and details.

You can enter to win the Kayak Family Package just in time to gift it for Father’s Day on June 21st! Valued at $719 for the summer, this package includes 2 nights at Harrison Hot Springs Resort, 2 hours kayaking, and more for the whole family. Here’s how you can enter to win:

RT to enter to win a @HarrisonResort Family Kayak Package from @Miss604 http://ow.ly/O2cMs

Follow Harrison Hot Springs Resort and Spa on Twitter and Facebook for more information. I will draw one winner at random from all entries at 12:00pm on Friday, June 19, 2015.

The prize package is redeemable Sunday to Thursday (excluding holidays) and is based on availability. Must be redeemed by September 2, 2015. Prize is based on the participation of two adults and two children 16 and under.

Update The winner is Mike B!

Share77
Tweet
Share
Pin
Email
Reddit
WhatsApp
77 Shares
Current Contests on Miss604
*All contests are open to residents of Canada only, unless otherwise stated. Contest timelines are published on each individual post along with entry methods. Some contests may only be open to those 19 years of age and older. Winners are announced on the contest blog posts. Contest policy »

Also on Miss604.com
« Friday Late Night Movies at the Rio Theatre June 2015
Bark at the Bird: Bring Your Dog to a Whitecaps FC 2 Match »