Holiday shopping season is upon us as our neighbours to the south line up for deals next Friday and local shoppers make their lists, and check them twice. With that in mind, White Spot is bringing back their holiday gift card incentive and other special offers for gift givers in BC. 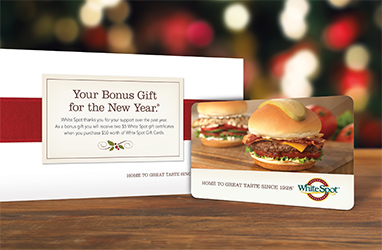 This season when you purchase $50 in White Spot gift cards you receive $10 in bonus certificates valid for the new year. Bonus certificates are valid from January 2nd until March 31st, 2015. One coupon per person, per visit, while quantities last.

The White Spot cookbook will also be available for the special retail price of $14.95 ($10 less than the retail price printed on the book) with partial proceeds going to Variety, the Children’s Charity. With your purchase you’ll also receive two $5 off coupons (one for breakfast and one for takeout). Coupons are valid from January 2nd to March 31st, 2015.

To promote these holiday gift ideas from White Spot I have a $50 gift card and a White Spot cookbook to give away to one lucky reader. Here’s how you can enter to win:

Follow White Spot on Twitter and Facebook to keep up to date on their latest menu offerings and promotions. I will draw one winner at random from all entries at 12:00pm on Thursday, November 20, 2014.

Update The winner is Shannon Mac!