Red and Black and Fun All Over!

One of the great benefits of living in Vancouver’s West End is being near Stanley Park. Almost every day, I step out my front door, smell the sea air, and whisper to myself, “I can’t believe I live here.” It’s a far cry from the chilly suburbs of Calgary where I grew up. And every chance I get, I head out along the seawall to listen to the tide crash in, to relax and breathe and clear my head, and look for some of the wild creatures that call Stanley Park home. There’s always something: eagles overhead, a seal bobbing off Ferguson Point… a couple of months ago we even had dolphins offshore. And as I walk, I always keep an ear out for my favourite birds of the intertidal zone: the beautiful, comical, excitable black oystercatcher. 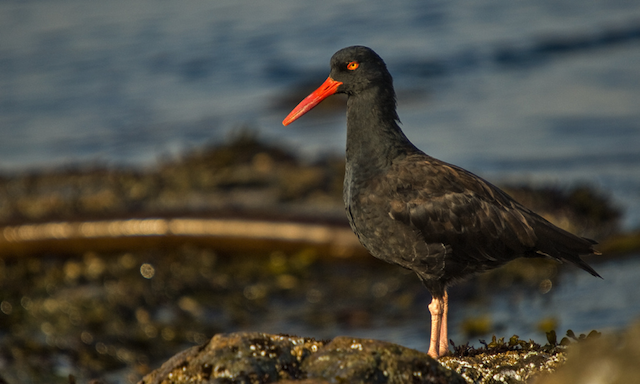 You can’t miss them, once you learn what they look like. They’re all black except for their long pink legs and their huge orange beak. A friend of mine remarked that they look like a crow smoking a carrot. And if you don’t see them, you’ll almost certainly hear them. They whistle. And we’re not talking about a sweet twitter of a songbird—these guys’ calls are raucous, and almost anything will set them into a frenzy of excited hooting and whinnying. Eagles flying overhead, the arrival of their relatives from up the shoreline, a change in the weather, anything. Once you learn to recognize the call, you’ll hear it a lot. Listen for it between Second Beach and Siwash Rock. 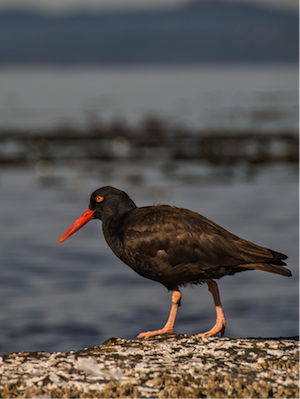 It turns out that it’s not easy being an oystercatcher, and it’s not just because they have to climb around on cold rocks in their bare feet all day. First of all, it takes remarkable skill to outwit the clams, mussels and other mollusks that make up their diet. The oystercatchers of the world have two different styles of hunting: you’ve got your stabbers, and you’ve got your hammerers.

Hammerers use their big orange bills to pound their way through the shell of their prey to pull out the juicy insides. Stabbers are a bit more refined; they wait until the mussel or clam relaxes a bit and opens up, and they quickly stab their big beaks into the opening to eviscerate their prey. Our oystercatchers are stabbers, and it’s a skill that they need to learn and perfect over time.

Most birds are quick to fledge their babies; a sparrow can boot the young ‘uns out of the nest within weeks of their hatching. But oystercatchers are the Generation Y of the bird world, taking several months to move out on their own. They need the extra time to learn their hunting skills from Mom and Dad; they won’t develop their full repertoire of techniques until they’re about three years old. Parents mate for life, which is up to 15 years for these birds.

Next time you’re out on the seawall, look for oystercatchers that have black colouring on the ends of their orange bills; those are this year’s hatchlings, recently arrived from their nesting grounds not far away. 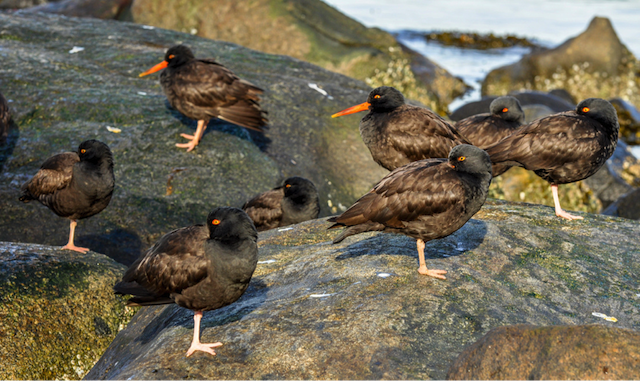 Learning to eat isn’t the only skill that a young oystercatcher needs—they also have to master the fine art of not getting eaten. Peregrine falcons are a major predator. These raptors are powerful and fast, and can outfly almost any bird on earth. Our oystercatchers have a tricky defence: they fly away low over the water, just skimming the waves. The falcons won’t risk getting that close to water. Clever birds.

Black oystercatchers are completely dependent on the thin strip of shoreline along our coasts for their entire life cycle. The intertidal zone of Stanley Park is a very busy place, and oystercatchers (and all the living things they depend on) are best left undisturbed. Keeping your dog on a leash at all times is a big help. Fortunately, they’re easy to appreciate from a bit of a distance, given their larger-than-life personalities.

I think it’s remarkable that despite the 10 million-odd people that visit the park, we still have oystercatchers making a living on our shores. May they live and thrive and hoot and squawk for generations to come.

Share11
Tweet
Share
Pin
Email
Reddit
WhatsApp
11 Shares
Current Contests on Miss604
*All contests are open to residents of Canada only, unless otherwise stated. Contest timelines are published on each individual post along with entry methods. Some contests may only be open to those 19 years of age and older. Winners are announced on the contest blog posts. Contest policy »