Created in 2006, Terminal City Rollergirls (“TCRG”) is a member-owned and operated, non-profit organization consisting of close to 100 skaters, a team of sharp officials, incredible volunteers, generous sponsors, and an army of passionate fans. The Terminal City Rollergirls 2014 season is well underway but there’s still plenty of action coming up over the next few months.

For the first time in nearly three years, Vancouver’s Terminal City Rollergirls will be welcoming fans back to New Westminster’s Royal City Curling Club for its next two regular-season, house-team roller derby doubleheaders. 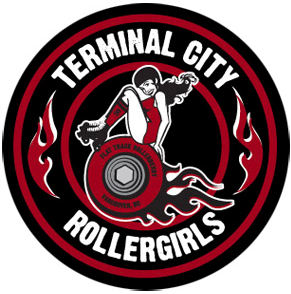 The famous DougieDog diner truck will be on site for both of the Sunday events serving up hotdogs, and a beer garden will be hosted upstairs in the RCCC lounge, providing a seated window area for audiences to watch the action from a bird’s-eye view. The club is likely to reach capacity quickly, so patrons are reminded to arrive early and bring a chair as club chairs are limited.

Tickets are $10 for adults and $5 for kids aged 6-12, and available by cash at the door, or online. Kids aged five and under are free.

There is also an all-stars match-up on Friday, July 11, 2014. Terminal City All-Stars take on Houston Roller Derby All-Stars at Minoru Arena in Richmond, doors at 7:30opm, whistle at 8:00pm.

Last year Erin “Miss E. Masculator” Morrisette wrote a guest post for me, featuring “5 Reasons to Love Roller Derby“. In case you missed it, here are those reasons again:

You’ve seen the posters on the Drive. You’ve overheard discussions on the Skytrain. You’ve even seen the skaters fly by on the seawall…and you still haven’t been to a roller derby bout? Don’t worry; there has never been a better time than now to check out the Terminal City Rollergirls, Vancouver’s first female roller derby league. Need convincing? Here are five reasons why we’re sure you will love roller derby:

1) The sport: Fast-paced and hard hitting, flat-track roller derby is the fastest growing women’s sport in the world. Since the first modern day women’s leagues formed in Texas and Arizona in 2002, there are now about 1400 active teams worldwide, including over 100 in Canada. And it’s no wonder. You won’t find balls, stunts or alligator pits; modern roller derby is not fake or pre-determined. With four blockers from each team trying to stop the opposition’s point-scoring jammer while also helping their own jammer score, roller derby is a highly strategic game where offense and defence happen at the same time. Teamwork is essential, but huge hits and breakneck speed play their part, too. Sit in the front row and you just might find yourself a part of the action – at your own risk, of course. 2) The event: The Terminal City Rollergirls host big, lively events that look and sound great. Of course, the 2000 or so fans are treated to an action-packed sports event, but their appetites are also pleased with offerings from the beer garden and food trucks on site. During breaks in the action, DJ Shawn LaRock spins booty-bumping tunes, and there is half-time entertainment by the likes of the Vancouver Dodgeball League, EastVan Pillowfight League, Vancouver Bike Polo and more. After the bouts, little fans can collect autographs from their favorite players, and grown-up fans can buy their favorites a victory beer at the after-parties. Et tu, Canucks?

3) The crowd: Diverse and hilarious, people-watching at a roller derby bout is almost as fun as watching the sport itself. From families with bouncing kids to raucous bachelorette parties, roller derby events draw a wide range of people. The tattooed and mohawked sit next to hardcore sports fans and diminutive grandmas – everyone’s a roller derby fan once the whistle blows.

4) The players: Terminal City Rollergirls are hyper-competitive, strong and colourful women from all different backgrounds. Everyone has heard the old story of the shy-librarian-by-day-fierce-derby-girl-by-night – and the TCRG does have a couple of those – but the players represent so much more. From bank managers to architects, video game designers to elementary school teachers, these women take their sport very seriously and train hard to be the best players they can be. Their incredible athleticism and big personalities will make it difficult to pick a favourite player, but you’ll try. 5) The league: TCRG is a member-run league that has been around since 2006. They have four house teams (the Bad Reputations, Faster Pussycats, Public Frenemy and the Riot Girls) with rabid local fan followings, and the TCRG All-Stars rep team that plays internationally. The All-Stars made history last year, making the biggest rankings jump in the history of WFTDA (the NHL of roller derby). The league has a reputation to uphold and a lot of fantastic neighbouring leagues to challenge. They’ll be holding one bout per month (starting in April) so Vancouver fans will have ample opportunity to catch the rollergirls in action. More information on the upcoming season can be found on their website at terminalcityrollergirls.com.