ere’s a common conversation in Vancouver neighbourhoods these days: “Did you see that? Was it a dog? No, I think it was a coyote!” Since they first arrived in the 1980’s from the deserts and grasslands of the Midwest United States, coyotes have successfully adapted to living in an urban environment. Vancouverites frequently spot them in parks, school grounds, golf courses and neighborhoods. 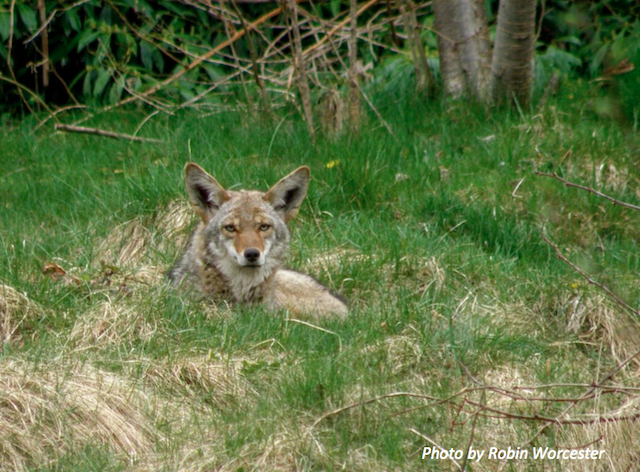 For the large coyote population that calls Vancouver home, spring is an important time of year. Breeding takes place between January and March and the female coyote will dig a den, or use a past den to rear her pups. Although you may encounter a coyote loping along your street, you’ll rarely come across their dens. They are well hidden to keep the pups safe. Ideal denning locations include    secluded parts of parks  and golf courses, behind blackberry bushes, and underneath abandoned buildings. 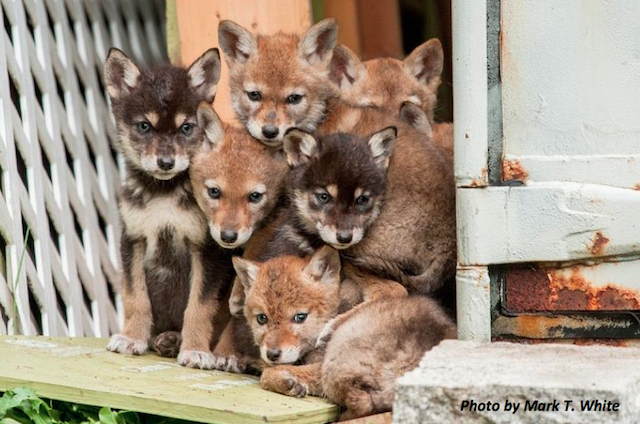 The female gives birth to the pups in March and April and the coyote parents spend the next four months raising them. The average litter size is between four to seven pups, but this can vary depending on how much food is available. By the end of August the pups will be ready to start life alone. Usually one or two pups will remain in the family pack to assist with the next pup rearing season, helping to find food and train young coyotes to hunt. The rest of the surviving pups will start their lives alone in the city, searching for new territory and food sources.

Report a Den or Coyote Sighting

While coyotes are naturally afraid of people, during breeding season coyotes tend to be more territorial. Like most animals, they take the safety of their young ones very seriously and this can also make them defensive. If you come across an active den site or pups, please report it to the Stanley Park Ecology Society online or call 604-681-WILD and avoid the area.

What Else Can You Do?

There are several simple things you can do to make living around coyotes safe for you and the animals. It’s extra important at the moment because over the next couple of months, young coyotes will be learning the skills they need to survive in the city. If we aren’t careful, the young coyotes may learn to depend on people for food, rather than learning how to hunt for their own favourite foods like rats and squirrels.

Never feed coyotes: Feeding coyotes is bad for the health and safety of both coyote and community. Unfortunately when coyotes are fed, they lose their natural fear of people and will become aggressive. It is only a matter of time before aggressive coyotes behave badly and will have to be destroyed.

Keep your house and yard clean: Sometimes we feed coyotes by accident. Coyotes are generally scavengers and will take any opportunity for an easy meal. 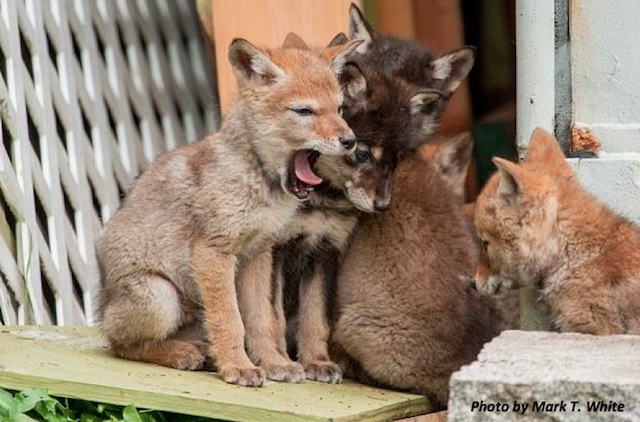 Garbage: Keep a secure lid on all your garbage, and don’t litter.

Pet food: Do not feed pets or store food outside.

Rodents: Clean up anything – including spilled bird feeder seed – that attracts rodents to your yard. Rodents attract coyotes as they make up at least 75% of a coyote diet.

For more tips on how to co-exist with coyotes, check out Stanley Park Ecology Society website. 

Share10
Tweet
Share
Pin2
Email
Reddit
WhatsApp
12 Shares
Current Contests on Miss604
*All contests are open to residents of Canada only, unless otherwise stated. Contest timelines are published on each individual post along with entry methods. Some contests may only be open to those 19 years of age and older. Winners are announced on the contest blog posts. Contest policy »
Comments are closed on this post
Advertisement