There are characters that can define a community and in the 1970s, it was “Ace” Aasen — the self-proclaimed Mayor of Gastown. Although the area on the eastern edge of Vancouver’s downtown is named after another character, John “Gassy Jack” Deighton, this historic quarter seems to have always attracted interesting personalities. 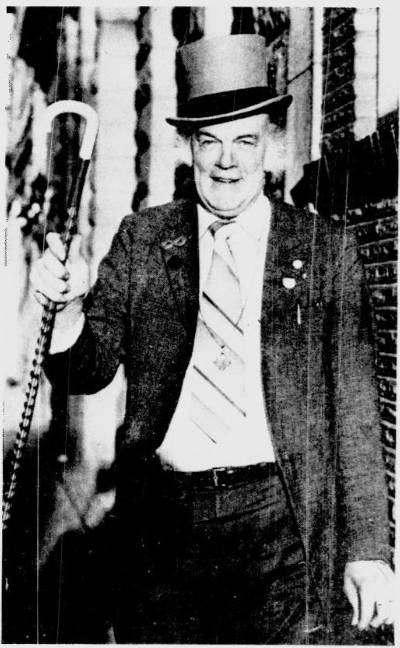 Gastown was a different place in the 1970s, having recently gone through a revitalization to return it to its former glory, before Vancouver was even a city. Cobblestone streets were installed, an old-timey steam clock became an attraction, and there was a push to make the area a National Historic Site (a designation it wouldn’t receive until 2009).

Called the “icing on the cake for Vancouver’s sightseers” in 1971, an article in The Financial Post compared the new, old Gastown to Toronto’s Yorkville or Old Montreal. The article also specifically mentioned “Ace” Aasen, unofficial mayor who walked around in a tuxedo and top hat greeting visitors, even though he was on welfare.

The Ubyssey published a feature about Gastown’s unofficial mayor on September 25th, 1975 at a time when the neighbourhood was a popular student hangout. Chuck Davis writes that the interview with the man who “strolled around the Gastown streets in a somewhat tattered top hat, sporting a cane and passing along his thoughts on life,” at times “approached coherence”.

However, four years before the student article, in April of 1971, a fundraising drive in Gastown was launched to help get its unofficial mayor off of welfare. Ace Aasen’s story unfolded in The Windsor Star‘s April 15th, 1971 edition:

“Businessmen in Vancouver’s recently rejuvenated old sector will be asked to contribute so that the unofficial civic head, Ace Aasen, can live in a fashion befitting his title. Many residents, including Mr. Aasen, think it’s not right that Gastown’s first citizen should subsist on a diet of bologna sandwiches and depend on the generosity of others for beer and cigarettes. But Mr. Aasen says he can do little else on welfare of $95 a month. Mr Aasen, 51, a former laborer, car salesman, and chef on trans-Canada trains, turns his attention to promoting Gastown 18 months ago when a leg injury kept him from working.”

“… Gastown shop owner Mrs Francoise Mulhall, 22, began a petition to provide him with a salary on Mondays. She said “It’s a shame the mayor can’t afford to live decently. He has done so much to promote Gastown — and can do so much in the future that I think it’s only fair he should be paid.” Already businesses in the area have pledged a total of $100 a month. Aasen thinks about $500 a month would be a fair wage. “I need new underclothes my present ones are a bit skimpy and handkerchiefs,” he said. “The hankies I have now have holes.”

Aasen lived in the Europe Hotel, our own version of the Flatiron Building that looks out onto Maple Tree Square, the heart of Gastown. His room was adjacent to the marquee, in the narrowest part of the building.

The whole city was behind Aasen that decade especially when he was the victim of assault, as detailed in this Canadian Press article from October 9th, 1973:

Self-styled mayor still Gastown top dog: “The mayor of Gastown woke up with a bulging blackeye Friday but his unofficial position as top dog in the youth-oriented area of Vancouver was indisputably reaffirmed. Ace Aasen, who long ago proclaimed himself unofficial mayor, was having a quiet dinner Thursday night in a Gastown restaurant when he found his status challenged by a young man proclaiming himself to be sheriff of Gastown. “There was this damn kid–he was only about 22–pretending he was a sheriff,” said the 54-year old mayor. “He was running around with a tin badge ordering people about.” As far as Mr. Aasen is concerned, Gastown just isn’t big enough for both a mayor and a sheriff and he was not going to the one to quit. “By God, no one’s going to run my town,” he said.

“The kid was trying to do my job, so I told him to stop throwing his weight around and he didn’t like that. “I told him he didn’t have any authority and so he challenged me to fight. I said to wait until I got my cane but I only just got to my table and he was right behind me. He hit me with his fist and had me on the floor and started to put his boots to me. I didn’t get a chance to give him nothing. Then some people got hold of him and called the police.”

Gary Larabie, 23, of no fixed address, was remanded Friday, Oct. 12 on his own recognizance charged with common assault. Friday, Mr Aasen wasn’t quite sure what was hurting most–his arthritic knee, his hernia, his sore chest or his battle-scarred eye. But his pride was intact. “I tell you, if I’d let that kid get away with it, he’d have taken over my town.”

I managed to find a copy of Ace’s interview with The Ubyssey in the online archives and I have to say, Davis’ description of the interview was fitting. Here’s a small sample of the whole piece:

Mayor of Gastown Ace Aasen: Alcoholic, ain’t anonymous. Mayor Ace Aasen with a hole in his left heel, a left-over top hat and brilliant crimson magenta alligator shoes, sat next to a tomato can that was functioning as a spittoon. Hockey on TV at the wide end, urinal at the narrow end of the $2 million triangle Europa.

The last time we were sober in here somebody pulled a butcher knife on us. The last time we tried to talk to Ace, it was about managing his campaign for de facto mayor of Vancouver. He hit us over the head with his cane…

… Ace tried to take charge of the interview by asking the first question himself. Have you ever seen a differential without a car? He went into a raving about infinitesimal differences between people of continuously varying qualities, going in different directions at once. Then he tried to sell us a duplicate of a very impressive looking letter from the Queen for two bucks apiece. We took the letter for our files and convinced Mayor Ace to take his gratuity in the form of alcoholic beverage.

He agreed this way: “Well I believe in my people no matter if they are going in two different directions at once. Do you want to read a letter? Ladies first.” Could we buy you $2 worth of beer? Oh yea. Or do you need the money? “Well I could use the $2. I got murdered twice since I seen you last. I got $2 last night and I didn’t even have to autograph it.” Then there were discussions about the king of hungry.

In a Vancouver Courier article from 2008 local historian Bruce Macdonald said Aasen “drank a lot but wasn’t drunk. He was interesting to talk to.” The last reference to Aasen that I can find online, and in archives, is from 1975. Actually, it’s The Ubyssey article.

I’m not sure what happened to Ace, but from what I can gather he loved Gastown — and those in Gastown loved him. He defended his position, he entertained with stories, and he was as much a part of the community as Gassy Jack himself was back in the day. New unofficial mayors of Gastown may be crowned but I’m hoping that with this post, Ace’s story will live on – as should many stories of those who find themselves making the best of a situation, even when their hankies have holes.