The Social Media Awards are a new campaign aimed to shine a spotlight on students and businesses that are making a difference in the online realm. They are a product of the Social Media Network which is comprised of university students, industry professionals, and recent graduates from various BC post secondary institutions with the goal of bridging the gap between education and business life. 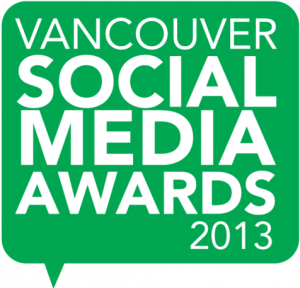 The top three nominees from each category will then be judged by a panel based on content, creativity, engagement, and overall experience. The business categories will also be judged on concept and integration.

Thanks to the Social Media Network, I have been added to the panel of judges that includes Dave Olson from HootSuite, Karm Sumal from VancityBuzz, Nikolas Badminton from TAXI, Steve Kim from BCAMA and Boilingpoint Group, Thomas Stringham from Hot Tomali, and Peter Chao from Pyrobooby. We’ll have a tough job to do in a few weeks but it will feel great to recognize the people and organizations that have been doing positive things with their online reach.

The awards will then take place during a reception and ceremony at the Roundhouse in Yaletown on Thursday, March 28, 2013. Three industry speakers will give their perspectives and insights on social media campaigns and practices and the winners will announced. Tickets go on sale later today. Follow TheSMSAwards on Twitter for the latest information.