Fiddler on the Roof; Pretty Woman: The Musical; Disney’s Aladdin; Ain’t Too Proud

Broadway Across Canada 2022-2023 Season in Vancouver

Broadway Across Canada has announced their upcoming season at Queen Elizabeth Theatre in Vancouver beginning this winter. Kicking off the season is critically acclaimed Broadway revival FIDDLER ON THE ROOF, followed by one of the most beloved romantic stories of all time, PRETTY WOMAN: THE MUSICAL, followed by the thrilling new production of DISNEY’S ALADDIN that is filled with unforgettable beauty, magic, comedy and breathtaking spectacle. Rounding off the season is the electrifying AIN’T TOO PROUD, the life and times of The Temptations that has won both Grammy® and Tony® Awards.

The season option this year, is the fan favourite CATS, and is available to add to the season package at an additional cost. Broadway Across Canada 2022-2023 Vancouver Season Subscribers receive exclusive perks, including: priority seating access, guaranteed prices, no fee easy payment plans, guaranteed same seats locations for all season presentations, and easy online upgrades & exchanges.

January 17 to 22, 2023
FIDDLER ON THE ROOF is the heartwarming story of fathers and daughters, husbands andwives, and life, love and laughter. This classic musical is rich with Broadway hits including “To Life (L’Chaim!),” “If I Were A Rich Man,” “Sunrise, Sunset,” “Matchmaker, Matchmaker,” and “Tradition. A beloved theatrical classic from Tony-winner Joseph Stein and Pulitzer Prize-winners Jerry Bock and Sheldon Harnick, this critically acclaimed production is directed by Tony Award®-winner Bartlett Sher (To Kill a Mockingbird, South Pacific, The King and I) and choreographed by the acclaimed Israeli choreographer Hofesh Shechter.

March 28 to April 2, 2023
PRETTY WOMAN: THE MUSICAL, based on one of Hollywood’s most beloved romantic stories of all time, springs to life with a powerhouse creative team led by two-time Tony Award®-wining director and choreographer Jerry Mitchell (Hairspray, Kinky Boots, Legally Blonde). Brought to the stage by lead producer Paula Wagner, PRETTY WOMAN: THE MUSICAL features an original score by Grammy® winner Bryan Adams and Jim Vallance (“Summer of ‘69”, “Heaven”), and a book by the movie’s legendary director Garry Marshall and screenwriter J. F. Lawton. PRETTY WOMAN: THE MUSICAL will lift your spirits and light up your heart. “If you love the movie, you’ll love the musical!” (BuzzFeed News).

July 24 to 30, 2023
Discover a whole new world at Disney’s ALADDIN, the hit Broadway musical. From the producer of The Lion King comes the timeless story of ALADDIN, a thrilling new production filled with unforgettable beauty, magic, comedy and breathtaking spectacle. It’s an extraordinary theatrical event where one lamp and three wishes make the possibilities infinite.

September 19 to 24, 2023
AIN’T TOO PROUD – The Life and Times of The Temptations is the electrifying new smash-hit Broadway musical that follows The Temptations’ extraordinary journey from the streets of Detroit to the Rock & Roll Hall of Fame. Nominated for 12 Tony® Awards and the winner of the 2019 Tony Award for Best Choreography, it’s a thrilling story of brotherhood, family, loyalty, and betrayal during a decade of civil unrest in America. Set to the beat of the group’s treasured hits, including “My Girl,” “Just My Imagination,” “Get Ready,” and “Papa Was a Rolling Stone,” AIN’T TOO PROUD tells the unforgettable story of the legendary quintet that Billboard Magazine named the greatest R&B group of all time.

CATS – Season Option May 23 to 28, 2023
CATS is one of the biggest hits in theatrical history. Composed by Andrew Lloyd Webber and based on T.S. Eliot’s Old Possum’s Book of Practical Cats, the record-breaking musical spectacular has captivated audiences in over 30 countries and 15 languages. Since its world premiere, CATS has been seen by more than 75 million people worldwide. Featuring new sound design, direction and choreography for a new generation — experience CATS for the first time as it begins a new life, or let it thrill you all over again!

American Express® Card Members have access to some of the best seats in the house for Broadway Across Canada performances. Advance tickets* will be made available through Front Of The Line® by American Express. Presale and single ticket on-sales for all shows to be announced at a later time.

It almost sounds like a normal summer weekend in Vancouver with the Dragon Boat Festival, Bard on the Beach, farmers markets, and berry U-Pick events in the valley. Miss604 is proud to sponsor Summer at Burnaby Village Museum and you can find all of these events and more things to do around Vancouver this weekend listed below:

The forecast is calling for extreme heat so the City of Vancouver has put together a list of cooling centre locations and resources.

This summer, the Britannia Mine Museum is turning up the fun by hosting a series of events to celebrate Canada Day on July 1st and an Old Town New Queens: Pride Night August 5th. The events feature the Britannia Mine Museum’s summer exhibit “More Than a Mine: Recreation in a Mining Town”, which pays homage to historic community celebrations and recreational activities of days past during its mining years between 1904 and 1974.

Summer at Britannia Mine Museum

The Museum’s Canada Day celebrations will feature live music from local indie folk/rock musicians, Coldwater Road, who will be performing two 30-minute sets between 11:00am and 1:00pm. Throughout the day Curator of Collections and Engagement, Laura Minta Holland and Assistant Curator Heather Flynn will be leading maypole dances and hosting a number of nostalgic games for visitors of all ages to enjoy. More info & tickets »

Join the museum’s first-ever after hours pride night “Old Town, New Queens” in the historic 99-year-old Mill building. A National Historic Site, the 20-storey Mill building will be transformed into a huge performance space featuring some of the most amazing LGBTQIA+ drag artists from the Lower Mainland.

Entry to the event includes a 45-minute drag performance as well as evening access to the Museum’s exhibits and STEAM experiments in the Terra Lab. Drag performers will be available for meet and greets at the gold panning pavilion through the night, with food trucks and an alcohol-free ‘mocktail’ bar available on site. A limited number of deluxe tickets will also include evening access to the Museum’s popular underground train tour. More info & tickets »

Britannia Mine Museum’s annual Copper & Fire Arts community event is returning Saturday, September 17th featuring talented local BC artists and their unique metal and earthen crafts. The event celebrates the arts and visitors can come experience the unique and creative ways minerals from the Earth can be showcased through art.

The City of Burnaby is going all out for Canada Day on July 1st with festivities happening at three locations, with something fun for everyone in the family – and yes there will be fireworks!

Road closures will be in effect along Patterson Avenue as well as Central Boulevard (between Patterson and Willingdon avenues) to ensure maximum space for visitors to explore everything the event has to offer, including:

With Metrotown and Patterson SkyTrain stations nearby, there are plenty of ways to get to the festival. Visitors are encouraged to take transit, cycle or walk, and please leave pets at home.

Time: 11:00am to 2:30pm
Location: Edmonds Plaza and Park (7433 Edmonds St, Burnaby)
Festivities at This Location: A fun-filled day of entertainment, arts and crafts and activities for the kids, games, a youth volleyball tournament, delicious treats and more.

Time: 11:00am to 4:30pm
Location: Burnaby Village Museum (6501 Deer Lake Ave, Burnaby)
Festivities at This Location: With the backdrop of its 1920s village streets, the free festivities include multicultural family entertainment, displays and demonstrations, children’s games and activities, and birthday cupcakes from the bakery.

For more information, visit the City of Burnaby’s Canada Day website and plan your day out.

One of the best parts of summer in Vancouver is all of the free activities and festivals we get to enjoy. A highlight for the last seventeen years has been the weekly salsa dancing at Robson Square in Downtown Vancouver.

Try the free beginner salsa dance lesson at 3:00pm, watch the dance performances at 5:00pm, or just check out the social dancing throughout the afternoon. 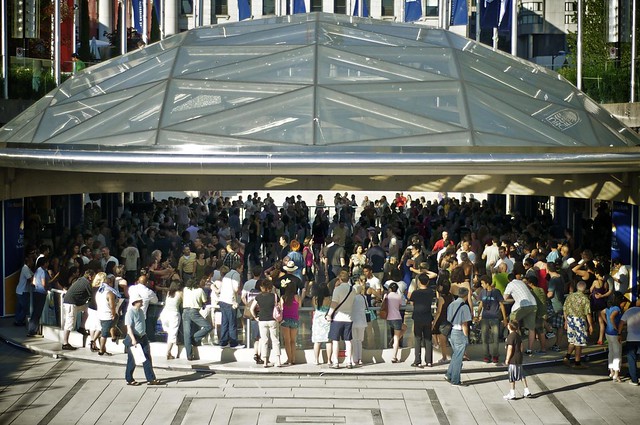 Here’s the schedule each week: 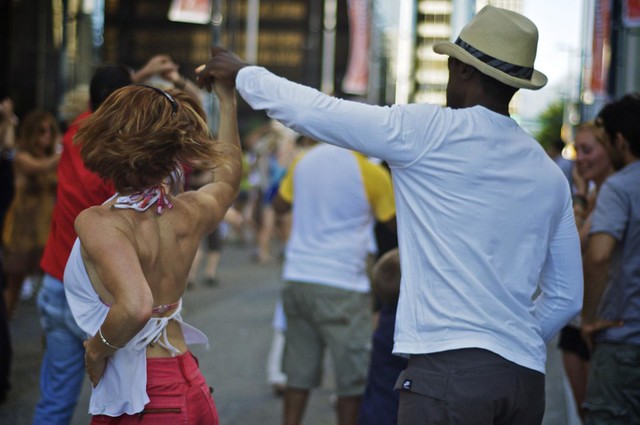 Organized by Jennifer and Stephen Dancey of Dancey Events, the dances are run by a team of volunteers from Vancouver’s salsa dance community.

Want more salsa? Book a harbour tour with Vancouver Salsa Cruises and hit the water in style! Take a lesson, dance on three floors aboard the MV Britannia, enjoy DJs, catering, the beautiful sights and more.