This weekend is the 20th annual Women in Film & Television Festival. Each year there are screenings, workshops, and plenty of social opportunities to mingle with movers and shakers from the West Coast. As proven by Kathryn Bigelowâ€™s Academy Award for Best Director on March 7th, women thrive in front of and behind the camera.

Let’s not forget the actual film screenings as well, which will take place both Saturday and Sunday. The rest of the festival is open to the general public all weekend and the exhibitor showcase is free to the public (register at the door).

Ticketed events include the screenings, the panels, the opening reception and the awards ceremony. You can purchase tickets for these events online or pick up a full festival pass.

I have two Festival Passes to give away which will get you and a friend into all of the film screenings this weekend. If you would like to enter to win the passes, please leave a comment or re-tweet the following:

Enter to win two passes to the Women in Film Festival this weekend from @Miss604 http://tinyurl.com/yyo2th5

This will be a quick contest and the passes are getting printed up for this weekend as we speak. I’ll run this until tomorrow morning at 9:00am.

Update The winner of the passes is Brenda, congratulations! Unfortunately I didn’t have a working email address for the 1st winner drawn.

Fine print: Approximate value of each pass is $45.

Today is the 3rd annual Pink Shirt Day in BC. In conjunction with Anti-Bullying Day which was created a few years ago by local radio host Christy Clark, it is a time to stand up and speak out against bullying. The pink shirts symbolize the story of a boy who was bullied for wearing a pink t-shirt to school one day. In solidarity, and to raise awareness about all forms of bullying, this has become a campaign symbol. 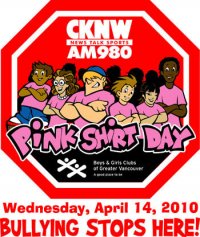 One in four children in Canada fall prey to one of these forms of bullying: Physical Bullying, Cyber Bullying, Social Bullying and Verbal Bullying.

On a personal note, I left school a long time ago but in every office or industry I have ever worked there has been some form of bullying — especially in the online realm. Passive aggressive blog posts or Tweets may sound like a joke but if you’re the target, it’s no laughing matter. People spread lies, hate, and mock others daily online, making cyber bullying seem as though it’s a natural part of the social space. They taunt and tease until the victim reaches a breaking point, like in Megan Meier‘s case.

Whether it’s schoolyard name-calling, teasing in the hallway, or posting defamatory content online, bullying is a serious issue and we need campaigns like this so that one day it will stop. This morning on Global Christy Clark said her personal message this year is “don’t be an audience” as may bullies are looking for that. She mentioned the dangers of being a “just a bystander”.

The online store has sold out of merchandise for today, which is a great sign as $5 from each shirt went to the Boys and Girls Club. London Drugs locations may have some stock still available and they’ll be selling some shirts on the streets of downtown Vancouver today.

You can also donate to the Boys and Girls Club, wear a pink shirt today regardless, or perform a random act of kindness (because those are nice any day).

The Telus World Ski & Snowboard Festival takes over Whistler April 16th until the 25th. The festival brings with it world-class downhill events, athletes, parties and some choice concerts. The fourth annual Jane’s Walk returns the weekend of May 1st and 2nd. This series of free neighbourhood walking tours are all planned, plotted and led by those who want to share their knowledge about their community. The goal of Janeâ€™s Walk is to raise urban literacy and build strong, connected communities by offering a pedestrian-focused event that combines insights into civic history, planning, design and citizen engagement with the simple act of walking and observing.

Last year there were more than 315 tours across Canada, the United States and India with about 10,000 participants in total.

The tours explore collective history, architecture or city planning. It’s the perfect opportunity to learn about how your street got its name, the age of the giant Oak on the corner, or how a new playground came to be.

Walks confirmed in Vancouver so far include:

Sign up online for the walk of your choice May 1st and/or May 2nd. If you would like to show off your neighbourhood know-how and local knowledge, you can sign up to host your own Jane’s Walk that weekend. Hosts also have the option to take a workshop about how to lead their tour, courtesy of Think City. This is the third annual Bike the Blossoms event that runs alongside the Vancouver Cherry Blossom Festival.

Starting points for the bike ride are at the Museum of Vancouver as well as the Britannia Community Centre. Routes under canopies of blossoms around the city are planned and include pit stops at participating shops and cafes. There will be a decorating station, musical guests, and a bike giveaway contest. All those who participate will also receive half-price admission to the Museum of Vancouver as well as VanDusen Gardens.

The cost to join the ride is $10 with a $2 discount for VACC, Museum of Vancouver or Cherry Blossom Festival members. Those 16 and under can ride free. You can register in advance, online.