BC Youth Week is back the first week of May celebrating the enthusiasm, skills, and accomplishments of the youth in our province. There are dozens of activities and events scheduled across BC including several in Metro Vancouver. There are many more events in other communities, including some on Vancouver Island, so if you have a youth in your life you can probably find something they’re interested in checking out. You can follow BC Youth Week on Twitter or Facebook for news and updates.

The first annual Canadian Video Game Awards will be held in Vancouver May 5th. While there have been other iterations of a video game awards ceremony in the past, this generation has teamed up with DigiBC to celebrate the best in Canadian gaming. The nominated games and finalists all needed to be works completed in Canada by December 31st, 2009. Nominations have now ended and the finalists have been announced. The public has the chance to vote for their favourite in the Game of the Year category.

Tickets for the awards ceremony at the Vancouver Convention Centre May 5th are currently on sale for $35. The Canadian Videogame Awards will take place the evening before the second annual Game Developers Conference (GDC) Canada so GDC pass-holders will get a discount on admission to the event.

The 18th annual Wellness Show will take place under the sails at the Vancouver Convention Centre April 30th until May 2nd.

The show will feature cooking workshops and sessions with some of the city’s most well-known chefs (such as Karen Barnaby from The Fish House in Stanley Park) and Hidekazu Tojo (of the world-famous Tojo’s). There will also be living well seminars, and a special series on women & well-being. There are also dozens and dozens of exhibitors to check out, from Steve Nash Fitness World to the Relax The Back Store.

The organizers have graciously offered up the goody bag of all goody bags for me to give away to a reader including two tickets to the Wellness Show. The prize pack includes Honey Laundry soap, a dental care kit, lotion, chicken stock, yoga gear, a Spoonk Rider portable acupressure mat (valued at $75). In total I have about $250 worth of treats, gift certificates and swag.

I entered to win a prize pack & tickets to @TheWellnessShow from @Miss604 http://ow.ly/1Cixy

I will draw the winner at 2:00pm on Tuesday April 27th. I will need to personally deliver this so that you can get it in time for the Wellness Show so please make sure you supply a valid email address so I can contact you for details should you win.

Update The winner is Leona Wong (comment entry), congratulations and have fun at the show!

The history of Vancouver’s flag (and thus its coat of arms) was suggested by a reader the other day so I have dug up some research about our city’s icons.

Coat of Arms
Vancouver’s first Coat of Arms was drawn up by alderman Lauchlan Hamilton (as in Hamilton Street) and assumed in 1886. However, as it was deemed pretty “unofficial” by Coat of Arms standards, a new one was designed by James Blomfield. Bloomfield is also known for his stained glass work that hangs in New Westminster’s Holy Trinity Church as well as Gabriola, the mansion most recently known as the home of the Macaroni Grill. His Coat of Arms was used by Vancouver from 1903 and variations appeared after 1928. END_OF_DOCUMENT_TOKEN_TO_BE_REPLACED

The West End Community Centre once again presents Art in the City, April 30th until May 2nd. 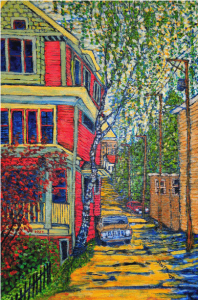 This is the 5th annual showcase of local drawings, paintings, and photography. Admission is free and pieces from over 50 artists will be on sale.

You can also enter to win this year’s featured work, “Cardero” by Tom Antil as seen on the promotional poster for the event and in this post.

The West End Community Centre is located at 870 Denman Street and are on Twitter @WestEndCC.