My first posts about the Vancouver 2010 Olympics was in November of 2007 although I’ve been following the lead up to the Games ever since I heard the IOC announcement of “Vancouver” for 2010 from my desk in Boston back in 2003.

Can you believe it’s actually here? I wrote a tweet this morning that simply said, “Welcome to probably your biggest day ever, Vancouver.” My husband woke up even more excited than a child on Christmas morning.

After watching the torch relay come through a crowd of thousands on Georgia Street we headed over to the countdown clock in front of the Vancouver Art Gallery. It reads, “Day 0000”. This is it. The Olympics are here. A small group of colleagues stood in front of the clock and cheered, “Go Canada!” as their photo was taken. Within seconds more people joined in their photo. Complete strangers stood arm and arm to pose for another photo, together. Soon enough it became one massive photo opportunity with all participants chanting young and old chanting, “Go Canada!”. To say I’m excited is an understatement and I told my husband already that I’m going to cry during the opening ceremony. The world’s eyes are now on my city and I’m lucky enough to be right smack dab in the middle of it all. Across the city rounds of “O! Canada” are being sung and I’ve heard it at least twice already here at Robson Square. All I have to say is, Go Canada Go!

See also: John’s countdown to the Games from the eyes of an American in Vancouver.

This is it, one of the biggest days ever in the history of Vancouver is upon us as the 2010 Olympic Winter Games kick off this evening. With the mysterious opening ceremony tonight at BC Place (including performances and the lighting of the torch) everyone wants to make sure they can catch the action. Here are a few options for catching the opening ceremony:

Television
Live television coverage starts at 4:00pm on CTV and it will also be streamed online on the CTV Olympics site.

Radio
As the official radio station of the Games, News1130 will stream live audio from tonight’s ceremony on air and on their website starting at 6:00pm.

LiveCity
On the big screens at LiveCity Yaletown they’ll be playing the opening ceremony from all Winter Games since Calgary 1988. At 5:30pm they’ll have a pre-show for Vancouver before the main event begins at 6:00pm. The first 1,000 people through the gates will get a pair of red mittens.

Whether you’re at home, with friends, or at a public site, I have a feeling the entire Province, nation and maybe a big chunk of the world will have their eyes, hearts, and spirits focused on Vancouver tonight.

Another pavilion powering the Vancouver 2010 Olympic Games is the BC Hydro Power Smart Village. Located on Dunsmuir from February 10th until March 21st it will feature state of the art energy saving attractions and activities.

Home of the Future
“A showcase for the latest in home conservation, from smart appliances and a solar garage housing a plug-in vehicle to a green wall and hybrid water heater.”

Club Energy
Featuring the Sustainable Dance Floor, an interactive floor that lights up the more you dance on it. “From Sustainable Dance Club, a company headquartered in Rotterdam, The Netherlands. It generates its own power by translating the vertical movement of the floor into electricity. If you’ve ever been to a dance club, you know how much the floor moves when a popular song comes on.”

The Volt
Chevrolet’s electric vehicle, the Volt, is also on display at the pavilion. I had the chance to ride in it the other morning and it was pretty amazing.

There will be daily dance lessons (from salsa to swing) and all out dance marathons for those who just want to get down and light up the floor. The Power Smart theatre will be showing daily Games coverage, there’s a featured Paralympic Games showcase, and a mobile conservation lab to teach you the ins and outs of saving electricity.

If you can’t make it out to the village, our friends at Social Signal have created the Power the Games Facebook application for BC Hydro, which you can add to your profile.

I haven’t been by yet but I’ll be heading there throughout the Games to check things out and maybe I’ll attempt to bust some sort of move out on that dance floor. You can combine A, B, and C for 4 entries or just enter individually however you choose. I’ll calculate all the entries and I’ll do a live draw at the Power Smart Village at 10:00am on Saturday February 20th at the Club Energy dance floor. Contest will close at noon Friday February 19th so that I have time to put all the entries together for the draw.

Update February 16, 2010 The re-tweet tracking system (Tweetmeme) only archives tweets for 7 days. Since the contest runs for 8 days, do not be alarmed if you see your original/early entry no longer on the re-tweet list. I have already archived the first 6 days so no entries will be lost at all.

Update February 19, 2010 The contest closed at 12:00pm today and all entries (by Flickr, Twitter or comment) were received. I will compile all participants into one master spreadsheet list and do the draw tomorrow morning from the Power Smart Pavilion at 10:30am. Feel free to stop by for the draw as the winner will have to collect their tickets from there regardless.

Update February 20, 2010 I have to stay close to home this morning so I’ll post video of the draw online at 10:30am so all can see the draw.

Update February 20, 2010 I did the draw this morning and recorded a video of the process. Unfortunately the sound didn’t work but to avoid a re-draw here is the video anyway:

Thanks to my mom for helping me compile all 1405 entries that came in through Flickr, Twitter and comments. Also, thank you to everyone for entering and sharing some awesome tips. Congratulations to @WayneRacine on Twitter. Wayne, you have 24 hours to confirm your prize and I have sent you a Direct Message about this.

Fine print: Tickets are for the 12:00pm semi-final game on February 26, 2010. Commenters must enter a valid email address and confirm within 24 hours of notification that they can use their prize. Twitter users will also have 24 hours to confirm their winnings and will be notified by “@” or direct message. Tickets can be picked up from the Power Smart Village with valid government ID. Ticket may not be used in any other contests. If the winner cannot attend another name will be drawn.

Known to many as the “O! Canada Horns” the Heritage Horns that sound from atop Canada Place everyday at noon are a lunchtime staple for Vancouverites. Just as the Nine O’clock Gun in Stanley Park sounds the start of prime-time television, the 4 notes of our national anthem sounded by the Heritage Horns announce the rumbling of bellies hungry for their lunch break from work. 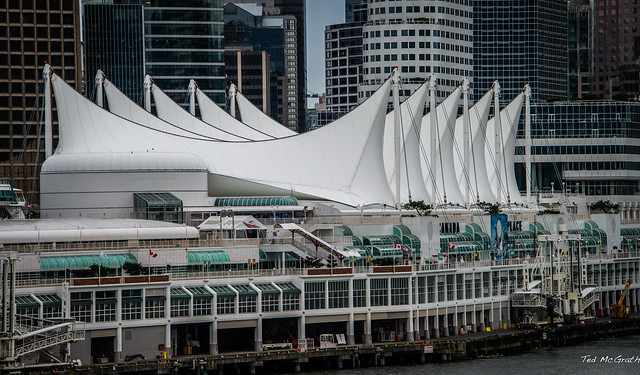 The horns weren’t always at Canada Place, they used to be on the top of the BC Hydro building (now condos) on the corner of Nelson and Burrard. I learned that much from my friend Laura and discovered a bit more with the help of the Spirit of Vancouver website:

As a special treat for the Vancouver 2010 Olympic Games, the Heritage Horns will sound every time a Canadian wins a medal. For 16 days they will support our athletes and sound out the victory across Vancouver.

“At 115 decibels, ‘O Canada’ won’t be missed. The horns can be heard throughout downtown, on the North Shore, and sometimes, even a little beyond,” explains Robyn McVicker, Director of Communications & Public Affairs, Canada Place Corporation. “We are all proud Canadians, and Canada Place will be the orchestrator signaling a time for all of us to celebrate our great nation and our athletes who have worked so hard to represent Canada.”

In the midst of all the Olympic excitement there are two special days being recognized in Vancouver on February 14th. The first is the Chinese New Year Celebration, and the next is Valentine’s Day. Here’s a quick roundup of events taking place on Sunday that you can enjoy. Chinese New Year Parade
When: February 14th from 9:30am until 11:00am (Year of the Tiger festivities)
Where: Starting at Millennium Gate at Pender St and onto Chinatown
Cost: Free
More info: Chinese Benevolent Association or About

If you have a community event you would like to highlight on this list, please feel free to leave information in the comments or contact me.