On September 10, 1898 a fire broke out on a wharf along New Westminster’s waterfront and when it was done raging through town, over $2.5 million in damage was done.

According to the City, within 10 minutes the blaze had jumped across to the brick buildings on Front Street, and three three Stern Wheeled steamers had also caught on, igniting nearby canneries before as were cut loose on the river.

The fire covered an area from the Market on Lytton Square to a residence on Carnarvon Street and Begbie Street.

“It was thought that the north side of Columbia Street might be saved, but from the burning Columbian Newspaper office in the Powell Building the flames jumped to No. 1 Fire Hall opposite. The fire hall was a wood frame building situated between two brick buildings on either side, consequently it was consumed by flames like a shingle in a stove.

Soon the YMCA, Duncan McColl and Public Library buildings were fired from the rear, while St. Leonards Hall and other buildings on Clarkson Street were belching smoke and flames. About this time, the Hyack Brigade was reinforced by the Vancouver Fire Department under Chief Carlisle. These men proceeded to the Begbie Block at the north east corner of the fire area. The Vancouver firemen were aided in their efforts by the fire pump on the ferry boat and they were accredited with saving the Burr Block, the only brick building remaining after the fire and still in existence today.” [City of New West]

After two days, the City from Royal Avenue to the waterfront had been ravaged, and the lower westerly portion known as the Swamp (Chinatown) had been completely swept bare.

“Walking through this devastation along Columbia or Front street, a visitor who was familiar with the city would have noted the tremendous loss wherever they looked. The street of popular stores and offices was gone.

The New Westminster Library, the first public library in British Columbia, has just moved into a new building, which was destroyed by the fire. “The only items not burned were those books checked out and a few saved by Alderman William A. Johnson, among them the Queen’s book.” 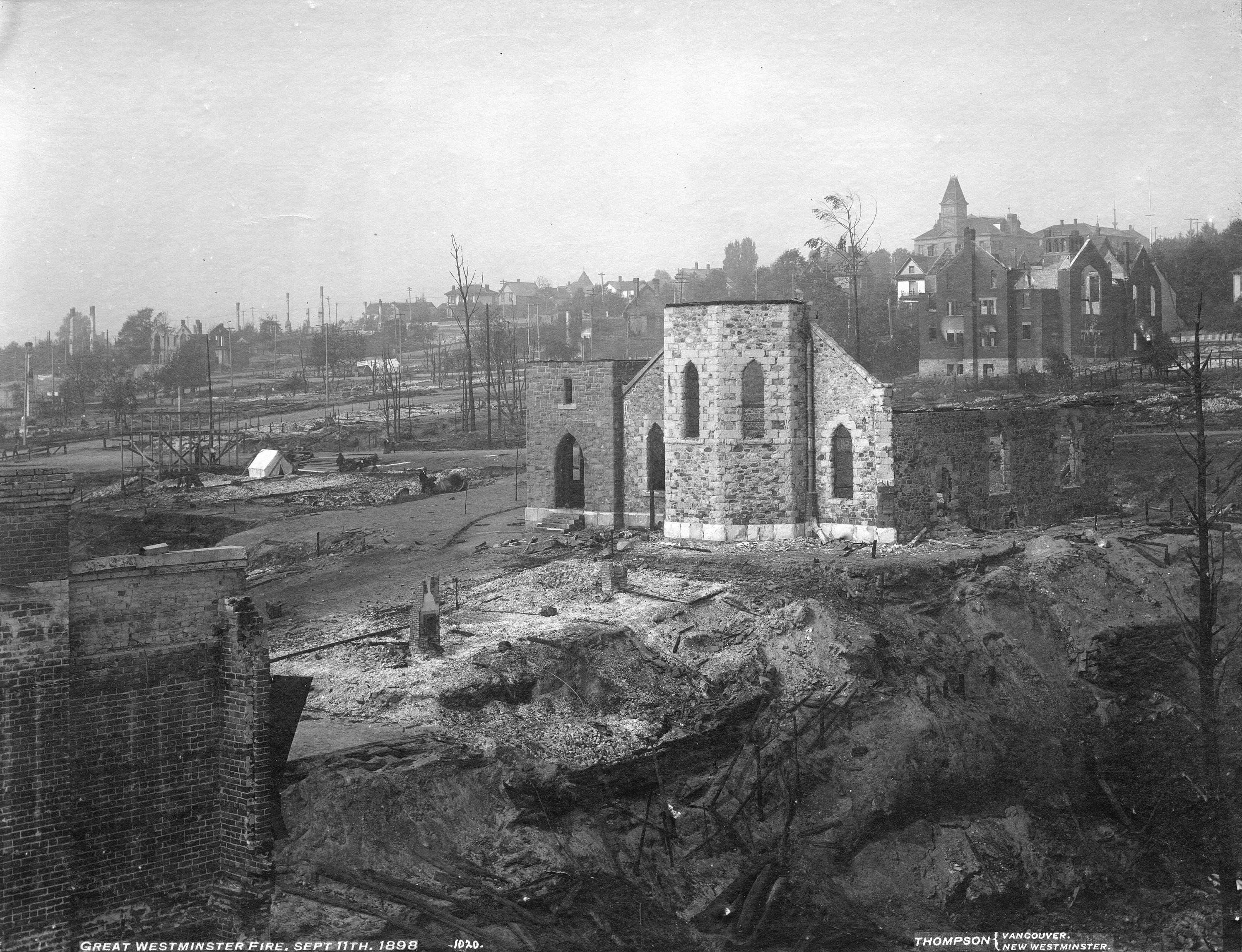 The cause of the fire remains unknown.

“In the days after the great fire of New Westminster in 1898 many residents were in shock,  while others were gripped by a passion to  blame someone. Among the latter, feelings ran high. A few local men went over to Vancouver and roughed up a newspaper editor because they did not like what he wrote.  As to the cause of the fire, a couple of theories dominated the rumor mill, one having to do with a steamboat, and the other, which raised the most ire, had to do with a pirate flag and suspected incendiarism.” [Opposite the City]

As with Vancouver’s Great Fire of 1886, rebuilding began immediately. 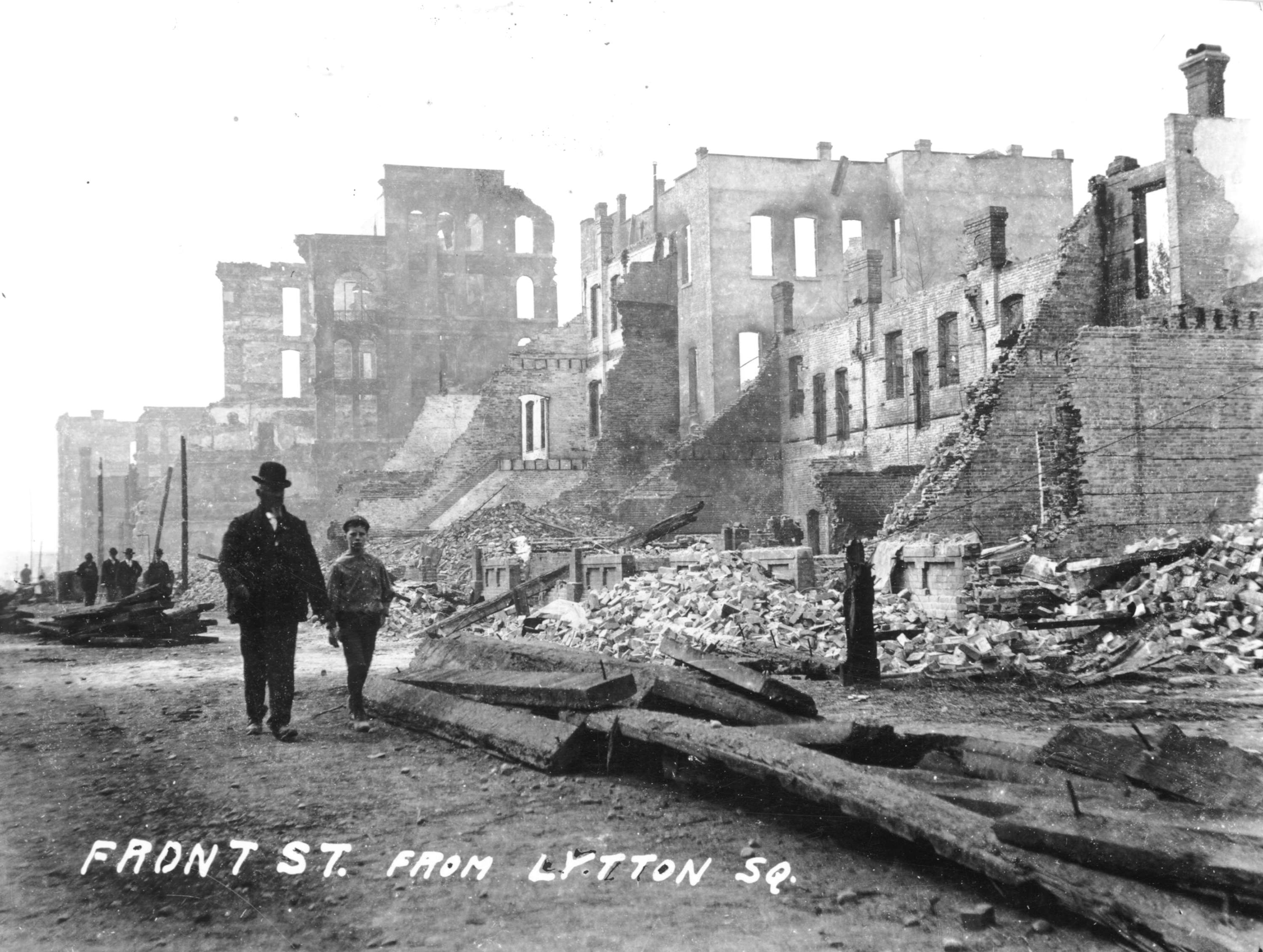 “Only one month after the Great Fire, New Westminster residents were lobbying to open a new library. A temporary Reading Room was established in half of a store building, with the other half occupied by the Fire Department, including its horses.” 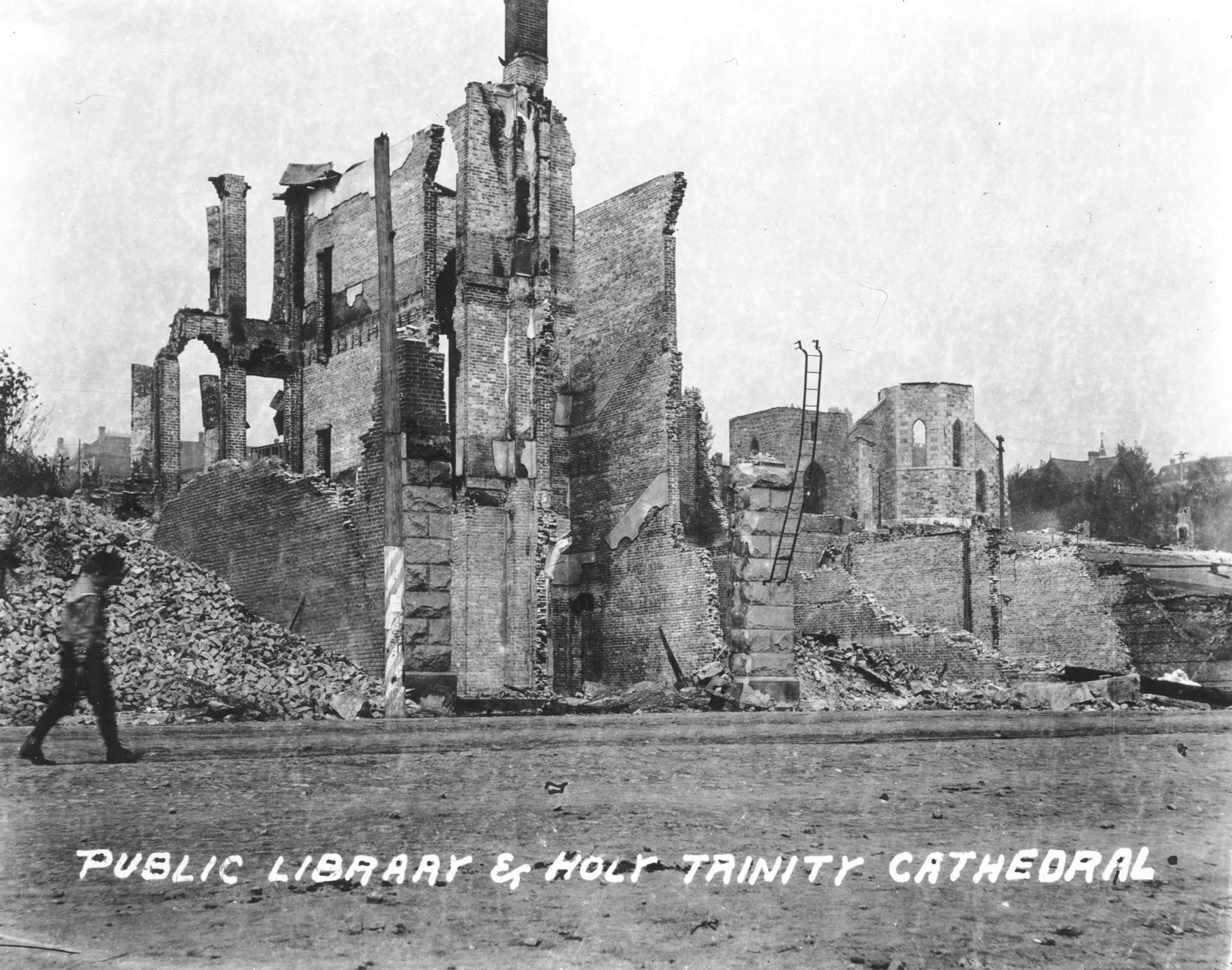 The two buildings that survived are the Guichon Block (Queen’s Hotel) and the Burr Block (The Met Hotel) next door: “The City of New Westminster had the challenge of re-building its city after this heart-breaking disaster, and successfully achieved this by 1910. From those times until today, Columbia Street has been known as “The Golden Mile” due to its colorful and inspiring historical background.” 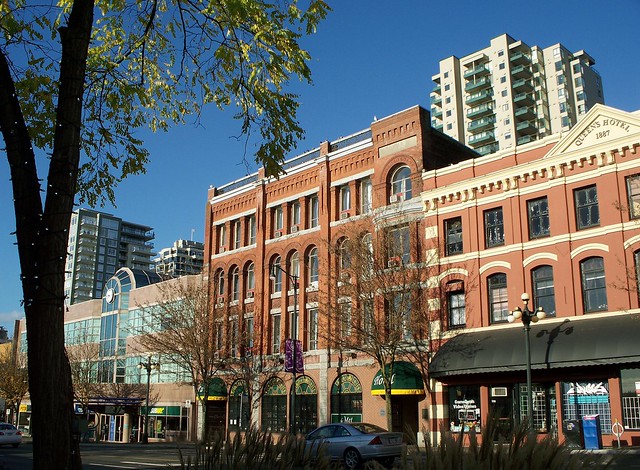 To learn more, visit the New Westminster Museum and Archives which has recently reopened with COVID-19 safety protocols in place.