This experience was courtesy of Tofino Resort & Marina.

“You covered a lot of ground!” our guide Liam exclaimed when we floated our stand up paddleboards up to the boat and rolled in like seals. My group was out for over 2 hours in the waters of Clayoquot Sound on the west coast of Vancouver Island, slipping across underwater kelp forests, surrounded by mountains — covered in old growth giants — that dipped right down into the sea.

Stand Up Paddleboarding in Clayoquot Sound

Earlier that morning I walked over to Coal Harbour in Downtown Vancouver and got on a floatplane to Tofino. The plane pulled right up to the dock at Tofino Resort & Marina, our group checked into our rooms and got our wetsuits from the Adventure Centre on site, and we were back down at the water within an hour for our first expedition. 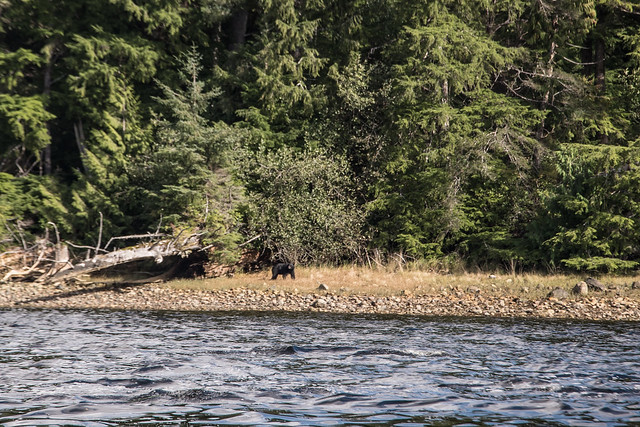 We hopped on a boat with Liam, who had secured 4 rental paddleboards for our journey, and ran us up Clayoquot Sound. Another tour offered by Tofino Resort & Marina is a boat-based bear tour. The perfect preview of that happened as we rounded Warne Bay and Liam spotted a black bear on the beach.

“This is the bread and butter of bear watching,” he turned off the engine and we floated in the water while the bear strolled along the bear, snout down, looking for something to eat. “They look pretty small from back here but they’re probably a good 400lbs, it’s just that they’re standing in front of old growth trees.” 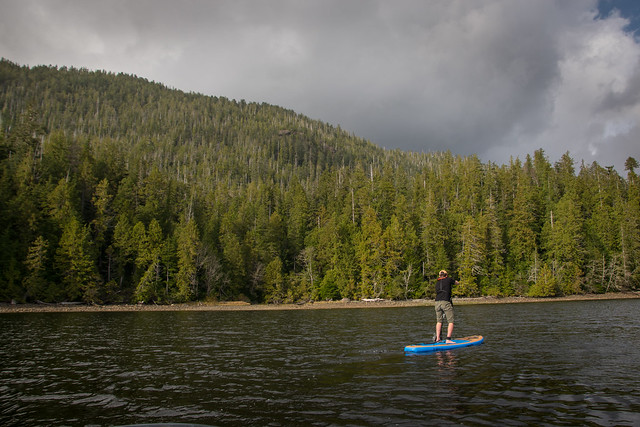 We continued on our journey, up another arm of the sound and Liam stopped the boat and pulled off the boards in a cove surrounded by old shipwrecks. It was quite the scene. After a quick refresher lesson, he set us free to roam and roam we did. 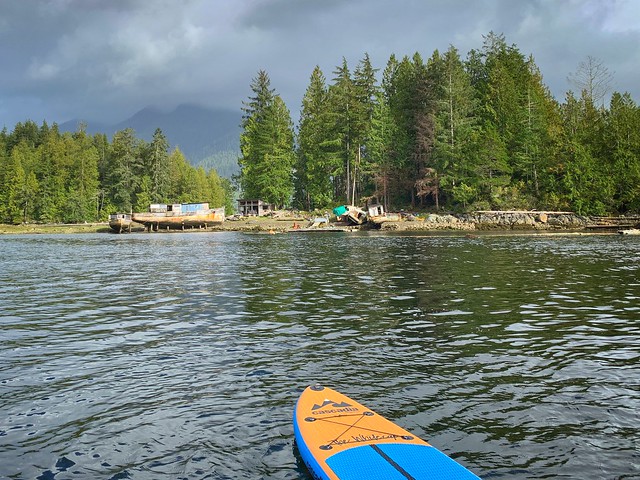 I paddled along the coastline and snapped photos of the group out on our adventure. One of my colleagues ducked into a quiet cove and laid back on her board, drifting peacefully toward the forest. It was easy to be at peace, the only sound was the lapping of my paddle in the emerald waters and the occasional hollow reverberation of a bull kelp bulb bumping under my board. 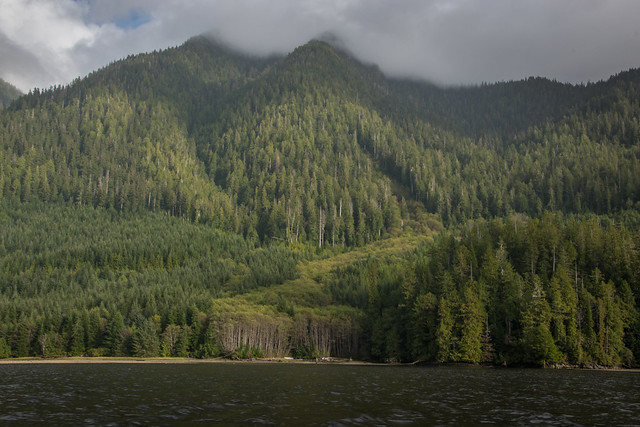 I had heard of Clayoquot Sound as a child, during the War in the Woods protests (1980s-1990s) related to clearcutting. 900 people were arrested in 1993 during the largest act of civil disobedience in Canadian history. In 2000, the entire Sound was designated as a Biosphere Reserve by UNESCO. The ecological importance and legacy of this stunning and majestic place was not lost on me. I was simply in awe. Not only was I literally balancing on the water, I was balanced between nature, adventure, and living history. I had a lot of time to think out there on that board. 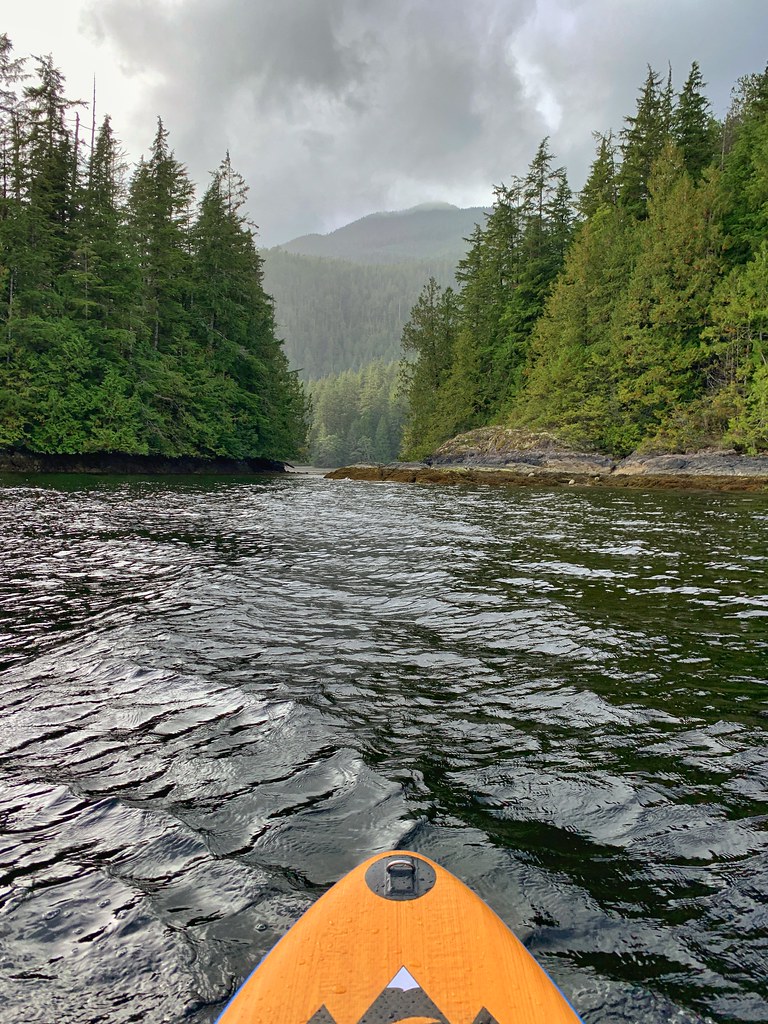 We paddled on for about 5km, Liam in the resort boat spotting us along the way and pulling up to an estuary which would be our exit point from the water. 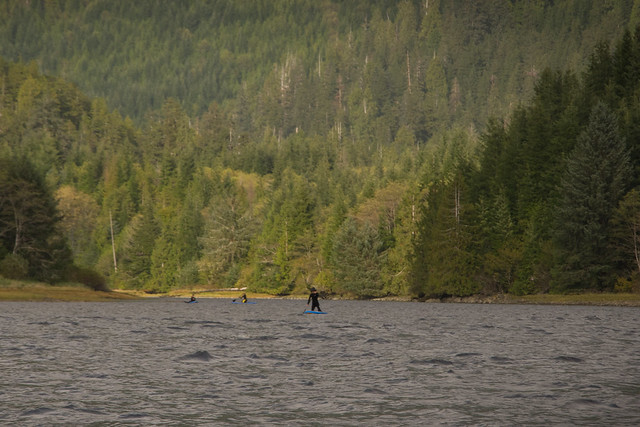 Back at the resort, Liam took care of our boards and we headed up to our rooms to get ready for dinner. It almost feels like summer camp at Tofino Resort & Marina. You have a clean room and comfortable bed but you barely see it because you’re out enjoying the amenities found right on site. 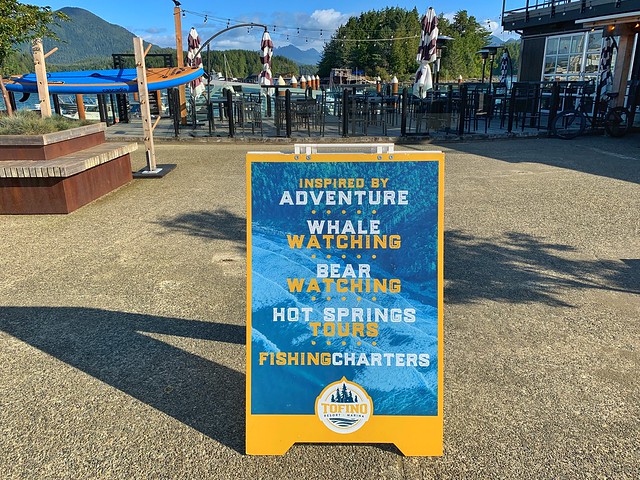 The Adventure Centre is Your Home Base

At the Adventure Centre you can book sightseeing (bear, whale watching) tours, a paddleboarding tour, and there’s also trips up to the legendary Hot Springs Cove. The Hatch and 1909 Kitchen (home of current Top Chef Canada winner, Chef Paul Moran) are right outside your door at the resort for breakfast, lunch, or dinner. You can also rent bikes, which will be the focus of a follow up post.