“I recommend a pint of draught,” Sue announced to our group when we arrived at the third stop on our Hysterical Historical Pub Walk around Dawson City. “It’s not all they have but it’s your best bet!” she raised her glass and got us a table at the Westminster Hotel. 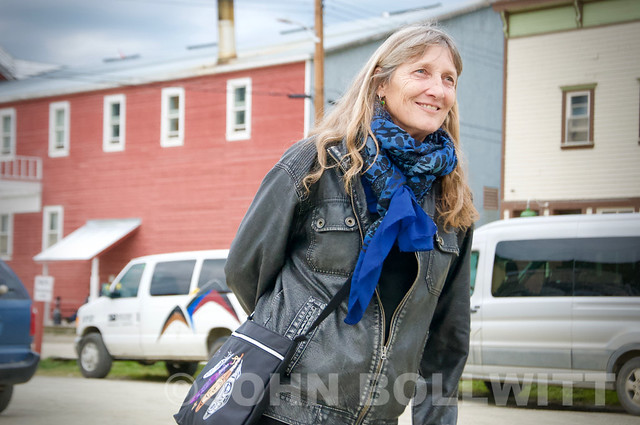 John and I had quite a few epic adventures during our recent Yukon trip, and the most side-splitting, smile-inducing, and downright fun was when we joined this pub crawl.

It could be that I hung out at the Robert Service Cabin too often (soaking up two consecutive days of verses from the Bard of the Yukon) or that Sue was such a character that I felt that she deserved more than a simple post. Whatever my motivation, I decided to write a bit of a ballad to describe our tour experience, and tribute our vivacious host:

Ready for the Hysterical Historical Pub Tour
we met on the porch of the Eldorado
four folks from Oregon, two from Fort St John
all eager to do the Sour Toe

Down the dirt road in a flash she appeared,
chaperone for our night on the town
“That’s Suitcase Sue” an Oregonian declared
“Where should we go?” he shouted down

“Don’t know about you but I’m going in for a beer!”
parking her bike off Third Ave she replied
we looked at each other, looked at Sue,
and promptly followed her inside

From the Eldorado to Bombay Peggy’s
Darker history told in tales unseemly
spitfire Madams, ladies of the night
the feature drink an Espresso Martini 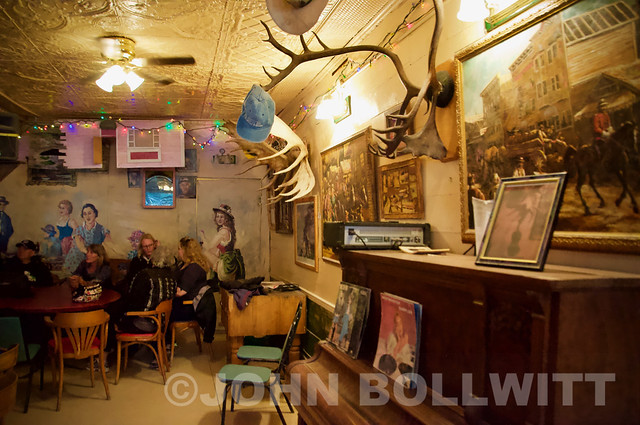 At the lively Westminster Hotel
is where we found The Pit
the walls were muraled, horns were mounted
the floors were slanted a bit

Locals gathered to imbibe and play games
pegs moved around a crib board’s dots
Sue told more stories, we were enthralled
Her neighbour bought a round of shots

The Downtown Hotel was the last stop
being the home of the Sour Toe
Frost-bitten appendage in a glass of whisky?
Sure, I’ll give it a go

“Drink it fast or drink it slow”
she repeated to every player
“but your lips must touch the toe!”
I closed my eyes to say a prayer

Down the hatch the shot went with a wiggle
I made sure the toe was kissed
I got a certificate, now a club member
a Yukon feat that’s not to be missed!

The tour is offered by The Klondike Experience, from June to August each summer season. It’s $25, and you pay for your own drinks along the way, however you get front of the line access to do the Sour Toe – valuable since on some nights Sue can induct up to 200 new members into the cocktail’s club. You also get 2 hours worth of history and stories from a local, which is always a worthy spend it in my books.

Share302
Tweet5
Share
Pin
Email
Reddit
WhatsApp
307 Shares
Current Contests on Miss604
*All contests are open to residents of Canada only, unless otherwise stated. Contest timelines are published on each individual post along with entry methods. Some contests may only be open to those 19 years of age and older. Winners are announced on the contest blog posts. Contest policy »