I was lamenting to John a few weeks ago that it had been a while since I really fed my brain, in terms of attending a workshop or conference and listening to an enlightened and entertaining speaker. Within a few days, truly like a message from the heavens above, I got an email about the Manning Park Dark Sky Astronomy Weekend. On top of visiting this gorgeous mountain resort in all its autumnal splendour (while warming up my camera for all the photos I would take of the amazing seasonal colours) I knew this was the perfect opportunity to learn something new. 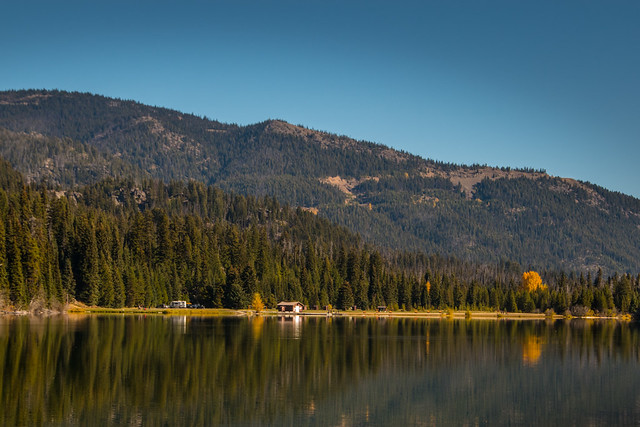 In partnership with the Fraser Valley Regional Library, who lent telescopes to attendees, and the Royal Astronomical Society of Canada (“RASC”), whose members led workshops, the Dark Sky Weekend was just what I needed!

We drove the Crowsnest Highway 3 out after work on a Friday and within 2 hours we were winding through the Cascade Mountains and summiting Allison Pass. We checked into the Manning Park Lodge for two nights and it felt like summer camp, with activities all taking place on campus at the the Alpine Room, downstairs in a conference room, and out at Windy Joe Field – a walking distance from the lodge and cabins. 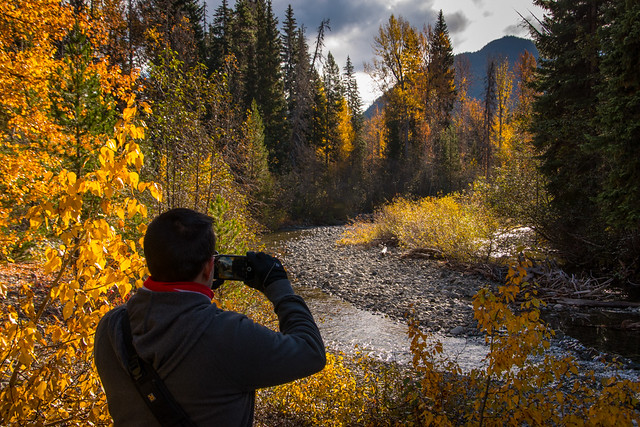 “To be out under the night sky for hours, watching the sky move, you feel it in your body and soul.”
~ Robert Conrad

The weekend’s events were perfectly timed, allowing for meal breaks where we spent breakfast and lunch at the Pinewoods Restaurant, and supper downstairs by the fire at the Bear’s Den. The “101” sessions were so fascinating: We learned the basics of night sky viewing, astronomy, and even a little physics.

By the end of the weekend we were star-hopping and charting asteroids thanks to the help of Robert Conrad of RASC some of the really cool apps he recommended. Robert says that the biggest concern he hears is that people don’t know what to look for in the night sky. 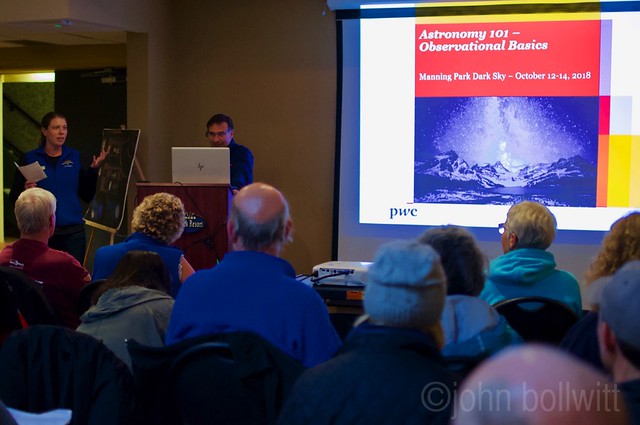 Even without training, you can pick out Polaris (aka the North Star) in the sky since it doesn’t move throughout the night. From there you can “star hop” over to another known constellation Ursa Major (aka the Big Dipper), link up with Ursa Minor (aka the Little Dipper) and you’ll soon be star hopping all over! By the end of the weekend we charted an asteroid, star hopping over from Nu Tauri (in Taurus). “Sometimes the journey’s more beautiful than the destination,” Robert spoke of star hopping from Sirius (the brightest star) over to Orion’s Belt. 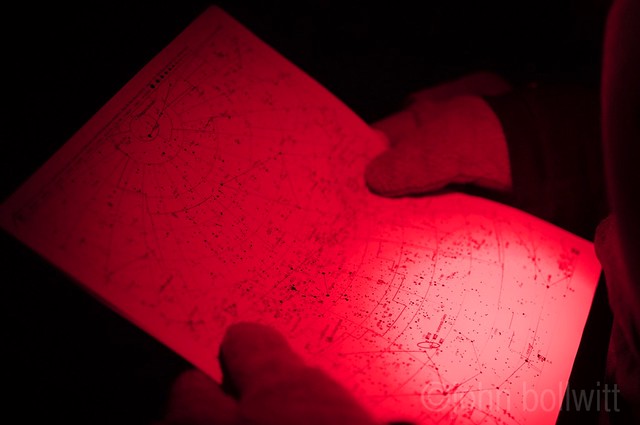 “I saw Cassiopeia,” a child in the front row exclaimed during Robert’s talk on Saturday morning. The group had gone star gazing on Friday night at Windy Joe Field. Families were having a lot of fun at the event too, with activities for kids and lots of hands-on learning opportunities. 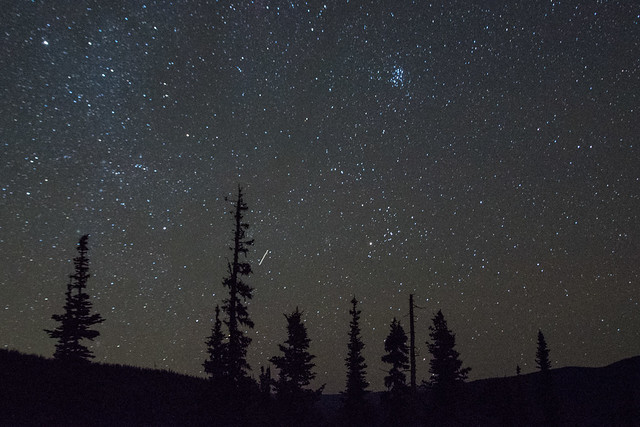 On Saturday night, we loaded into Manning Park shuttle buses and went up to the Cascade Lookout. In the pitch black darkness, flanked by mountains and the light of the Milky Way above, John and I setup our cameras to try our hand at astro-photography. Until 11:00pm, I used my new knowledge to tweak my settings as I went between my tripod setup and the hot chocolate station. For a first attempt, I think I had some success!

Another one of my attempts at astro-photography. On Saturday night, #ManningParkDarkSky guests were shuttled up to the Cascade Lookout. To the south, @manningpark. To the north and east, an abyss of darkness over the mountains with only the tips of trees giving away the elevation. Our workshops earlier in the day helped us star-hop and identify constellations, comets and asteroids. Heaters and hot chocolate kept us warm in between exposures clicking from cameras on tripods as midnight approached. What a magical experience! #ExploreBC #ManningPark #astrophotography #MilkyWay @hellobc #embracehope @embracehopebc @nikoncanada #NikonCA

“Not everything is beautiful, but it will move you.” Where I once looked up and saw stars, thanks to Robert and the Manning Park Dark Sky event team, I now see comets, asteroids, constellations, galaxies and nebula. And, at the very least, I see a new adventure.

Before the snow comes and Manning Park turns into a winter playground (seriously, the snowshoeing is awesome) you still have a few weeks of autumn hikes, photowalks, and stargazing to enjoy. Do a loop of Lightning Lake, climb Mount Frosty, or bring your telescope out to Windy Joe Field and enjoy some of their stunning dark sky conditions.

Windy Joe field: Located in the middle of our cabin loop to the west of the Resort. This is a very accessible location, although there will be more light in this area as it is around the Resort. Year-Round.

Lightning Lake Day Use: 4km from Manning Park Resort on Gibson Pass Road. Viewing area is located at the far end of the parking lot in the field by the lake. Year-Round.

Cascade Lookout: 8km on the Blackwall Peak Road. This is a winding mountain road with 1150m elevation gain. Please use caution! Spring-Fall only.

Check out their upcoming events too, like a Moonlight Nordic Ski Down during every full moon in the winter months. 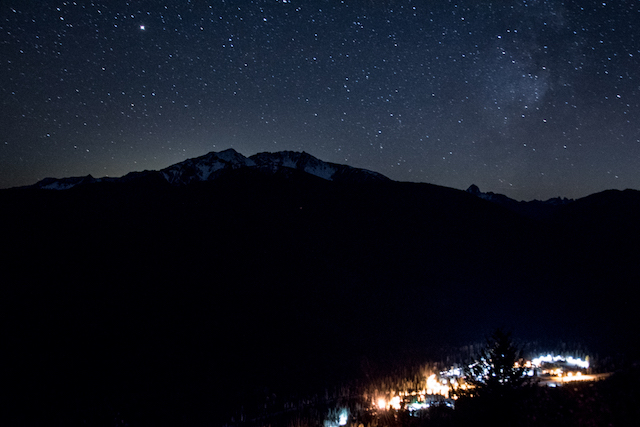