This post has been contributed by Patricia Thomson, outgoing Executive Director of the Stanley Park Ecology Society (“SPES”).

Patricia Thomson has been one of Stanley Park’s more tireless advocates, and we thank her for her passion and dedication to helping people connect with nature. Here, in her own words, Patricia shares an insider’s perspective of Stanley Park’s recent past and her hope for its future.

“I have had the immense satisfaction of working for Stanley Park’s ecological integrity and environmental education for almost half of Stanley Park Ecology Society (SPES)’s 30 years.

When I accepted the posting as Executive Director in 2004, there was a staff of seven, and a Board of 14 directors.   Today, there are on average 15 staff positions year round, and we swell to 20 each summer.  In addition, more than 800 volunteers per year collectively donate over 15,000 service hours, gifting a conservative value of $250,000 /annum to SPES projects and programs for Stanley Park. 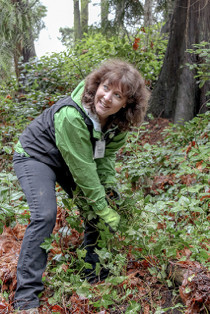 My own first project when I signed on was to ensure the completion of the Cob House earthen architecture popcorn stand in the Stanley Park Railway plaza.  Most nonprofits fundraise to build a facility; in this case, this facility was built to fundraise:  Popping delicious snacks provides important cash support for our all-important School Programs that inspire and invest more than 6,000 students each year.

Built of reclaimed stone, clay, straw and sand, UBC, BCIT, the City of Vancouver, and others contributed engineering research and a garden roof system all when green building methods were still being explored and developed.  In September 2004, I found myself on top of this ‘hobbit house’, raking its growing medium in zen fashion while my brain worked overtime contemplating Park projects to prioritize ahead.  Within months, I was able to represent the 200 cob volunteers by accepting a prestigious Innovation Award. 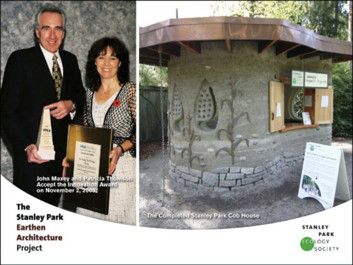 In these past 14 years, I am proud that we have also worked extensively for wildlife, building Best Management Plans and nesting structures for species of significance.  We have stood strong on safeguarding rocky beaches from off-leash dog activity for the benefit of seabird foraging.  We have shunned animatronic dinosaurs and stopped the construction of steel-towered aerial walkways that would not provide a net benefit of recreation nor solitude for Stanley Park – the “best urban park in the world”.

We have, instead, produced four citizen science community “Bioblitz” fairs, and led two dozen workshops for the recent prestigious International Ornithological Congress.  We leapt into wildlife monitoring in the wake of the Marathassa oil spill; ensured that a significant maternal colony of endangered bats were prioritized during important facility re-roofing in Stanley Park; removed climbing English ivy from more than 8,000 trees and snags, and dug out tons of biomass of more than 30 other invasive plants. 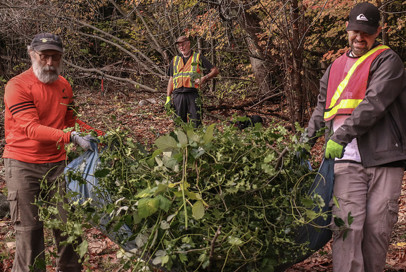 We have uncovered the hidden bog of Beaver Lake; mitigated the loss of green space and trees during the Causeway sidewalk widening; championed the first boardwalks within Stanley Park; planted thousands of shrubs, trees and understory plants to create ecotones and reclaim unsanctioned trails; and mapped and monitored the eagle nests and coyote activities of Vancouver, among many wildlife initiatives.

By far, however, the biggest growth spurt for SPES was in the wake of the wild windstorm of December 2006:  In a matter of hours, an estimated 10,000 trees snapped, splintered, and crashed, burying trails and roadways for weeks.  SPES did not have a Conservation Department at that time, yet we were able to rally a think-tank of more than 20 professional ecologists to strategize our own immediate contributions as an independent organization.  The outcome was a growing relationship with the Park Board, and an era of new leadership:  Among other contributions, SPES produced the first documents for Environmentally Sensitive Areas, Invasive Plant spread and management, habitats and Best Management for Species of Significance, and provided authorship for 40 interpretive signs. 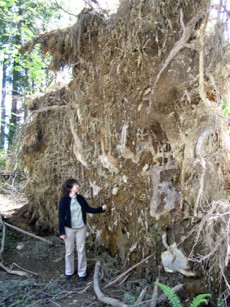 Patricia inspects the root ball of a
tree uprooted in the 2006 windstorm.

By the time we had been involved for 18 months with the Park Board in the Windstorm Restoration and subsequent New Forest Management Plan, I knew that there was no going back:  SPES was now committed to the future with an enduring Conservation Department to engage the community and inform School Programs and Public Education & Outreach.

I remain proud to have been with SPES for that post-windstorm transition, and to have successfully committed to find or make extra funding that has taken us from a $350G annual budget in 2004 to $800G in 2018.  While it is a stress every year to ensure that our staffing stays sustainable, we have survived and thrived.

Another huge milestone of growth for SPES was in 2010 when SPES presented the first State of the Park Report for the Ecological Integrity of Stanley Park to Park Commissioners and staff.  Almost 600 pages of research, narrative and maps presented a valuable expression of environmental health – or ill health – of Stanley Park.  Its impact was immediate:  Park staff were deployed to produce an Ecological Action Plan for Stanley Park that has kept us cooperatively busy with initiatives for these years since. 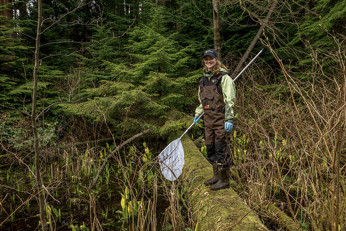 Every year I present as many as a dozen talks and walks for international delegations and dignitaries who are fascinated by the culture of volunteerism and corporate contributions in park settings. They are intrigued that a nonprofit entity can work so closely and collaboratively with government management.  And they are intrigued that the success of Stanley Park is due in great part to stewarding it much in a natural state.

In early 2019 we will present the first follow up State of the Park Report. Also ahead, SPES will partner with Vancouver Park Board on an educational boardwalk to reveal and protect the sensitive Beaver Lake bog.  SPES will be involved in the Comprehensive Planning for Stanley Park.  SPES will be engaged in mitigating impacts of the deep tunneling required for piping water under Stanley Park for Metro Vancouver.  SPES will work with the Intergovernmental Body of First Nations and Park Board and City of Vancouver in the Environmental Education and Stewardship Action Plan. 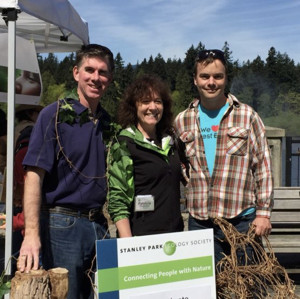 SPES will engage on policies and bylaws to protect Stanley Park’s habitats and wildlife.  SPES will champion the public’s desire to have Beaver Lake maintained as a wetland, and as a sustainable source for Beaver Creek.

SPES will also continue to respond to emerging issues, and to continue leading in environmental education.  I know that the future is bright under the fresh new Executive Directorship of one of our own – Dylan Rawlyk, an accomplished Manager, certified teacher, and a well-networked, experienced environmental steward.  I’ll be excited to support this transition now as a member, a volunteer, and donor!”

If you would like to support Patricia’s legacy and SPES’s work in Stanley Park as either a volunteer, a member, or a donor, please visit www.stanleyparkecology.ca.