I spent summers on the Sunshine Coast as a kid, going to camp in Roberts Creek, so maybe that’s why it makes my heart ever so happy when I get to set sail on the Queen of Surrey from Horseshoe Bay to Langdale and leave work behind for a few days. My destination on this adventure was Homfray Lodge, located at the very top of the Sunshine Coast (aka the upper 604 region). 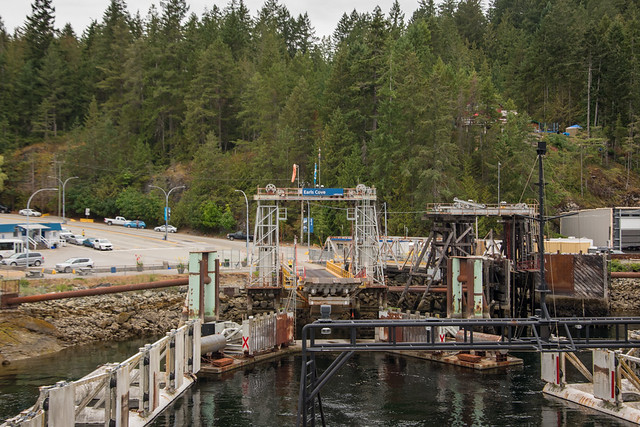 Getting to Homfray Lodge 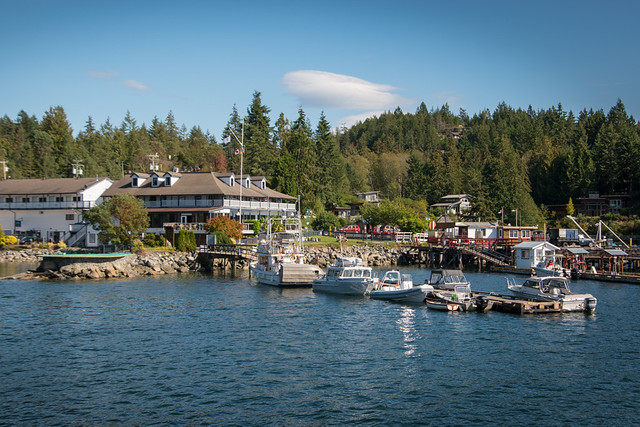 John and I decided on the two ferry route, to make some stops along the way in Gibsons and Powell River (including lunch at Coastal Cookery, tastings at Townsite Brewing, and provisions from the Gibsons Public Market). 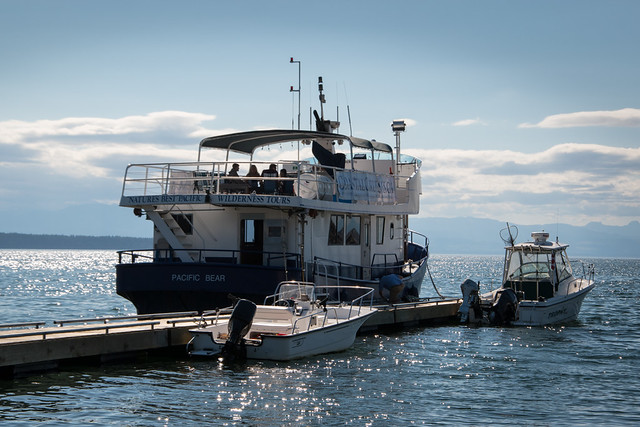 Arriving in Lund, at the end of Highway 101 – the longest continuous stretch of road in the world – we parked at the Historic Lund Hotel and waited for our Pacific Bear crew to meet us in the lobby. Lund was bustling with activity on a late August weekday. Campers requesting change for laundry, picnickers asking for directions to Nancy’s Bakery, guests checking into the hotel, and boaters making their way up from the marina for a pint in the pub. 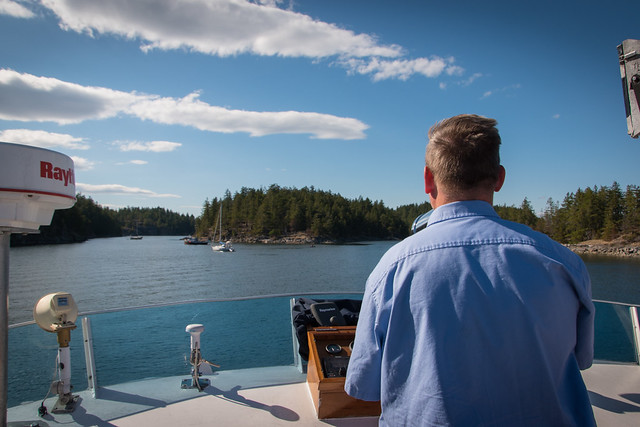 We met Lance and Greig from the Pacific Bear and made our way to the Little Blue Boat in the marina where our luggage was loaded on and we climbed the stairs to the top deck where cold beer and wine we waiting for us next to the sun-kissed lounge chairs. We were on our way to Homfray Lodge! 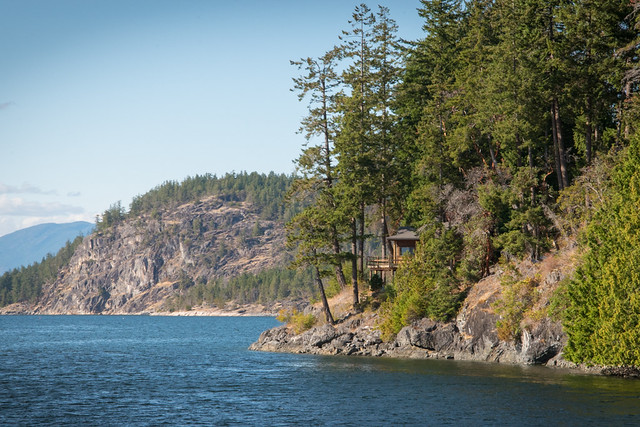 Departing Lund, we wove through Copeland Islands Marine Provincial Park where kayakers and boaters can setup camp for the night, with beaches in quiet coves leading up to tent pads and hiking trails. The landscape quickly opens up as you look west at the mainland. You realize you’re experiencing an ocean voyage through a mountainous forest. This is Desolation Sound. 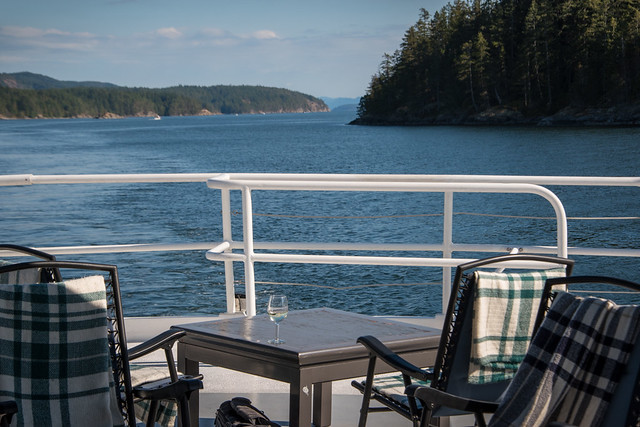 Evergreens grow right down to the high tide line, granite rock faces reach up to the sky, as Mount Denman raises 6,299 ft straight up from the sea. 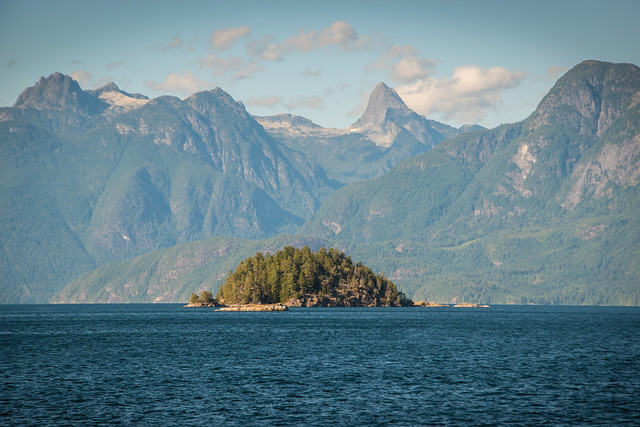 Desolation Sound Marine Provincial Park is located at the confluence of Malaspina Inlet and Homfray Channel. The park is a boater’s paradise, with kayaks to luxury yachts enjoying the bays, snug coves, 60km of coastline, and series of small islands. 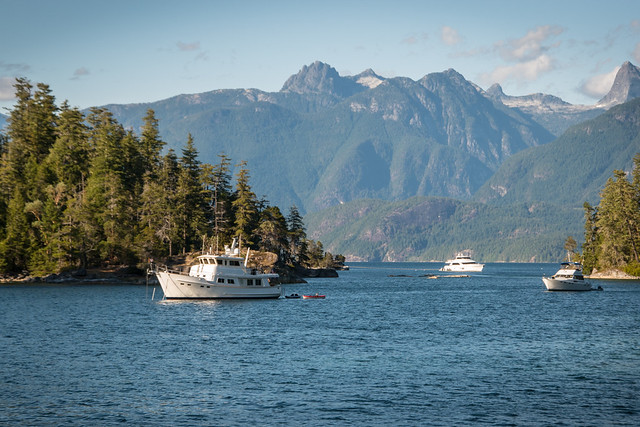 It fills my heart with joy, awe, and wonder every time I have rounded that bend past Bliss Landing. However, it was Captain George Vancouver, who first sailed these waters in 1792, who saw the land and seascape to be so remote and forbidding that he gave it its name.

Lance told us that the previous week he counted a hundred yachts moored in Desolation Sound, but there were just a handful as we sailed on to the Homfray Channel alongside East Redonda Island. The waters became calm, almost still, as we glided up to the dock at Homfray Lodge. General Manager Bill Sirota was there to greet us along with Pam and Cat, the staff who go above and beyond to take care of us during our stay. 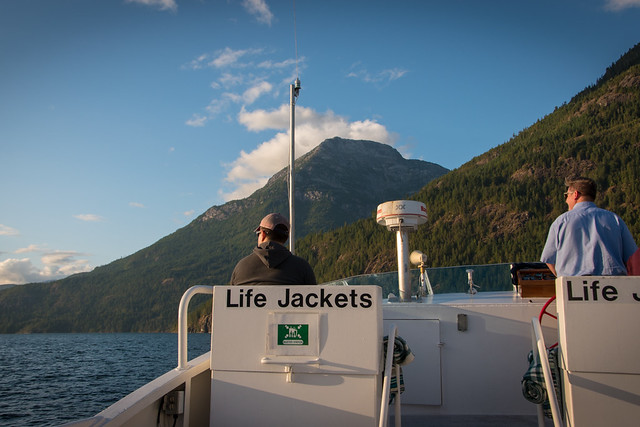 The Pacific Bear’s wake had dissipated and as we made our way up to the lodge, I looked back at the emerald waters, as smooth as glass, silent, and peaceful. I was so excited to make this my home for the next three nights. 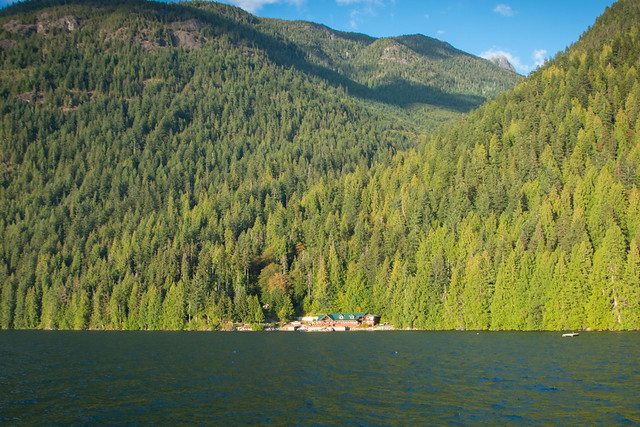 Up at the lodge, Chef Chris Graham had prepared a welcome snack of fresh, local BC spot prawns. Peppered and lined up on skewers with a spicy Thai sauce. Slices of watermelon with options of chilli, salt and lime garnishes were on display next to the ice bucket containing welcome drinks of BC beer and wine. We sat down in the main lodge area, with wooden beams overhead, a giant chess set in the corner, and historical placards on the wall that told the story of the region. 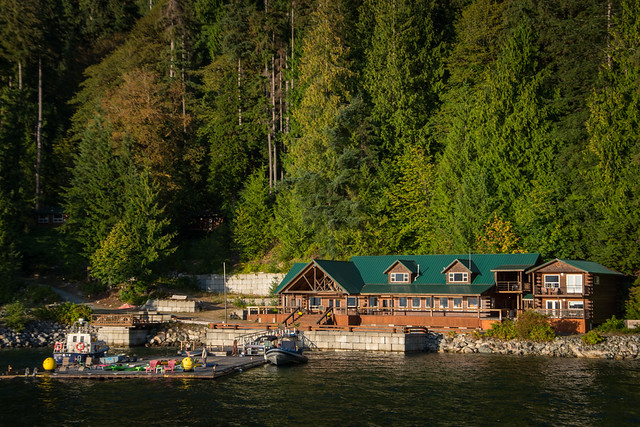 As our bags were moved from the boat to our rooms for us, Bill gave us a rundown of the lodge, safety procedures, some general guest instructions then we got our cabin assignments – it was really like a wonderfully grown-up summer camp! 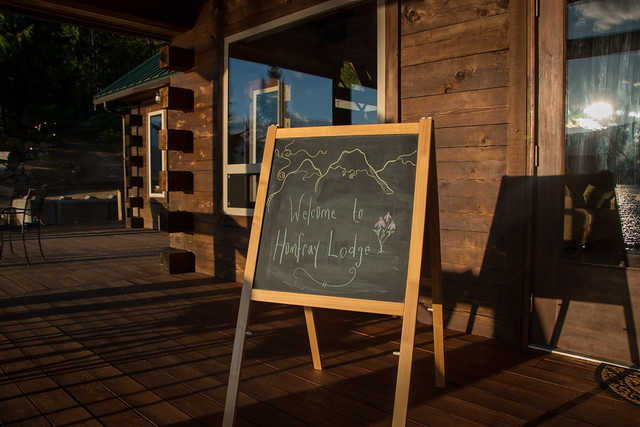 Three square meals a day are served up at this all inclusive resort, with three course dinners usually featuring a salad, then a main (like chipotle chicken, juicy pork chops, or local sockeye salmon served with vegetables and rice or potatoes), and a home made desert. We got cookies on the first night. Delicious, warm, fresh-baked vanilla cookies. John smiled and said they tasted like Christmas. He reached for another. 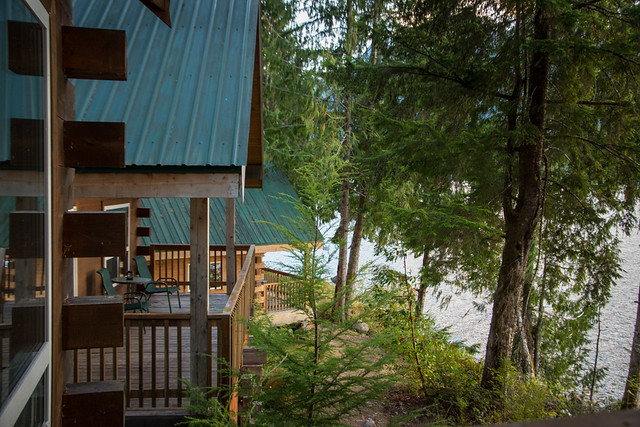 The wall of windows in the dining room looked straight out at East Redonda Island and we were told about the elusive second sunset. The first is when the sun goes behind the island, the second is when it drips past the horizon. Second sunsets at Homfray were the cherry on top of each delightful day of adventures. 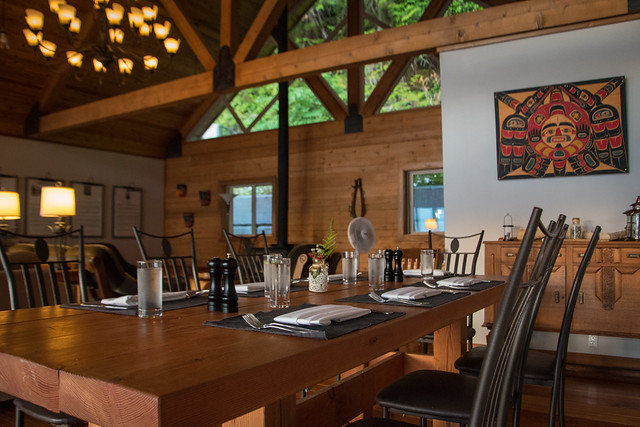 Crunching up the gravel path to our cabin to play cards, sip wine and listen to a specially curated playlist John had made, our first day was done. The gables of the cabin roof were two giant triangle-shaped windows. The stars above, the ocean beside us outside our deck, and our heads on our pillows, we drifted off. Breakfast would be served at 8:00am.

To be continued…! Tomorrow I’ll write about how we spent our first full day at Homfray Lodge.

The Pacific Bear aka the Little Blue Boat sails between Lund, Desolation Sound, Malaspina Inlet, the Copeland Islands, the Agamemnon Channel, Quadra Island, Cortes Island, and points in between. You can book multi-day tours that stop at various ports of call, or shorter trips with Grizzly Bear Tours, stopping overnight at Homfray Lodge.

The 5 Day Desolation Sound Cruise is now a Canadian Signature Experience with Destination Canada! Look for special offers like the Grant Lawrence Adventures in Solitude Tour in 2019.

Desolation Sound falls within the traditional territories of the Tla’amin, Hamalco, and Klahoose First Nations.