Summer Movie Nights on the Square will kick off on July 4 and continue through August 29 every Wednesday night. The movies will be shown at the North Plaza — which has just been renamed šxʷƛ̓ənəq Xwtl’e7énḵ Square — on Fresh Air Cinema’s giant, four-story, inflatable movie screens. 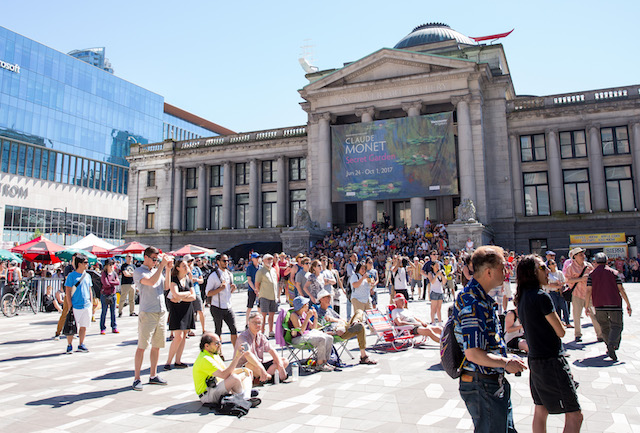 The theme of the first Summer Movie nights on the Square series will be “cities”. Each week you’ll be transported to another city, real or fictional, all from the comfort of Vancouver’s beautiful downtown core. Our first film will be chosen by you, the viewer, from a selection of five movies, including A Night at the Roxbury, Meditation Park, Midnight in Paris, Sleepless in Seattle, and Ghostbusters.

Bring your lawn chair and join us on a cinematic tour of cities around the world at the first Summer Movie Nights on the Square.

Movies begin at sundown each night, but there are activities and festivities beginning at 5:00pm and continuing until the show begins. For more tips, news and regular updates on shows and schedules, visit Downtown Vancouver online, and Outdoor Movies BC on Facebook and Twitter.