Back by popular demand, National Canadian Film Day (“NCFD 2018”) is taking place on April 18th with a spotlight on Female Filmmakers. More than 700 screenings are confirmed to take place in theatres, educational institutions and libraries across the country, and as far away as Iceland, Egypt, Tanzania and Japan. 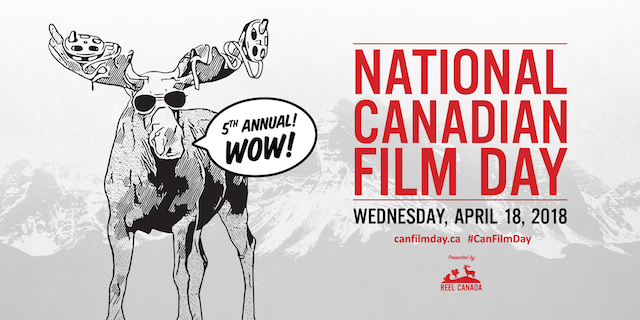 This year, REEL CANADA has curated a 40-film “sampler” of films led by women, but as always, our screening partners are encouraged to explore the full diversity and wealth that Canadian films have to offer.

“NCFD 2018 is defined by the overwhelming appetite Canadians have to see themselves and their stories represented on screen,” said Sharon Corder, Artistic Director, REEL CANADA. “And this is the perfect year to shine a spotlight on the work of female filmmakers. On April 18th, we’ll have the world’s largest audience watching films by Canadian women – ever!”

This year, a number of enhanced screenings are taking place in BC including:

Two of Canada’s most accomplished masters of cinema, Deepa Mehta and Alanis Obomsawin, will come together in a once-in-a-lifetime live event at which the women will discuss their storied careers and their considerable impact on the Canadian film landscape.

Attend Public Screenings: Events are happening in places such as cinemas, libraries, legion halls, community centres, military bases and many other locations.

Encore+, the Canadian Media Fund’s free YouTube channel makes many memorable Canadian movies of all genres available for fans of any age. A curated NCFD playlist will be available for anyone who wants an easy way to participate from home.

High school students in over 150 schools across the country will engage in RCtv, an innovative livestream event featuring an interactive Q&A with Canadian stars and filmmakers.

And there will be dozens of private events from elementary schools to retirement homes.