Chali-Rosso Art Gallery, Vancouver’s largest private gallery of original European Modern Master collections, has announced that it will temporarily gift the City of Vancouver with an original Salvador Dali three-dimensional, museum size, large scale bronze sculpture called Dance of Time I, valued at $750,000. This will be the first time that this sculpture has ever been displayed in Canada. 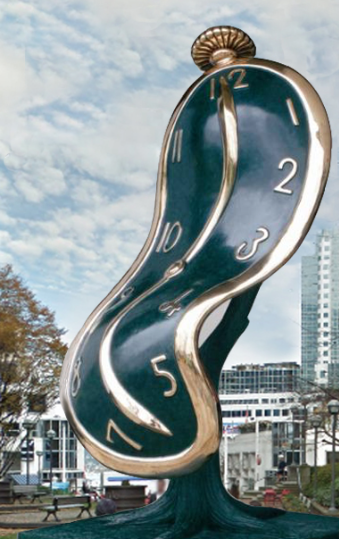 The official public unveiling of the seven-foot tall exhibit will take place on May 6, 2017 at 2:00pm in Downtown Vancouver at Lot 19 – West Hastings and Hornby.

The sculpture will continue to be on public display, in an open environment, until September 2017. For the duration of this “Definitely Dali Project” presented by Chali-Rosso Art Gallery, public donations received, as well as a percentage of Chali-Rosso Gallery sales will go to Arts Umbrella, a non-profit arts education centre for young people located in Vancouver and Surrey, BC.

Dance of Time I

Dance of Time I is on loan from The Stratton Institute, a non-profit organization dedicated to the promotion of culture and the arts, and which possesses the world’s largest collection of Dali’s monumental sculptures.

The sculpture was conceived in 1979 and the first cast was created in 1984. It exemplifies Dali’s controversial relationship with time, and the importance he believed to be inherent in memory. As Canadians reflect on the past 150 years during Canada’s 150th birthday celebrations, time and memory are topical subjects. The Dance of Time I symbolizes this evolution of time, and change that everyone can relate to.

As part of the Definitely Dali project, the Chali-Rosso Gallery has 100 additional original Salvador Dali artworks, including 20 gallery size sculptures, at their Howe Street location.

Also on Miss604.com
« Things to do in Vancouver This Weekend
Guided Nature Walks Around Metro Vancouver »