Paddling a river to a spectacular waterfall, cooking up foraged ingredients on a farm with locals, and putting our Gore-Tex to the test in a mountain rain forest in the Pacific Northwest at the base of a volcano. John and I spent the last shoulder season discovering three sides of Oregon’s Mt. Hood Territory, where we got in touch our Pacific Northwest cores and explored Oregon in a new way. 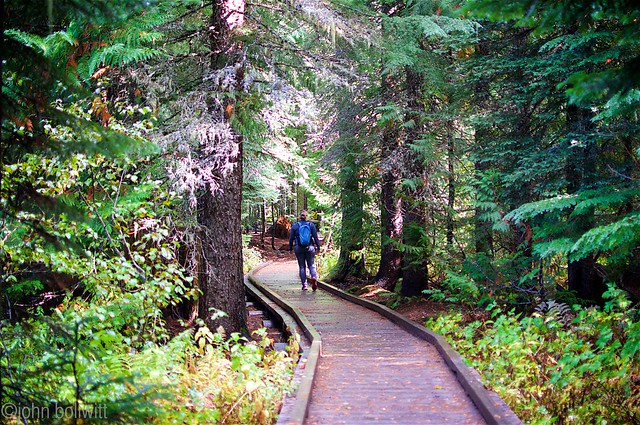 The itinerary set out for us by our friends at Oregon’s Mt. Hood Territory tourism office was a dream for us, so much so that I want to mention every stop and every bite we took in a bullet point list – but that would hardly make for interesting reading. Instead, I’ll highlight the three main pillars of our schedule: On the Mountain, In the Country, Around the City. 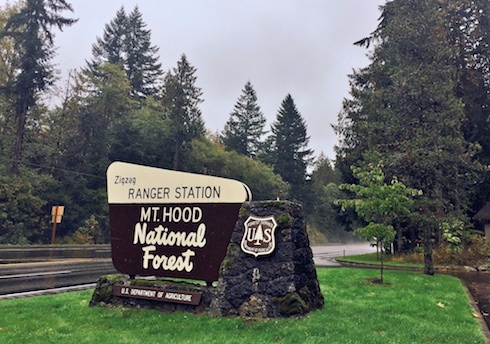 Our staples for a good road trip start with snacks for the car (picked up at Bob’s Red Mill in Milwaukie, OR) and trail maps. The latter was acquired at the Zigzag Ranger Station, along the Mt Hood Highway between Portland and the Mt. Hood National Forest. Many of the maps are also available online in PDF format, which I saved on my iPhone. They are very well laid out with difficulty ratings, distances, directions, and more.

While we were the in the National Forest we split our time between grabbing a hearty breakfast at the Huckleberry Inn in Government Camp, going on rainy hikes at scenic locations like Little Zigzag Falls, sipping local craft beer at Mt. Hood Brewing, and warming up in front of the fire in our condo at Collins Lake Resort. 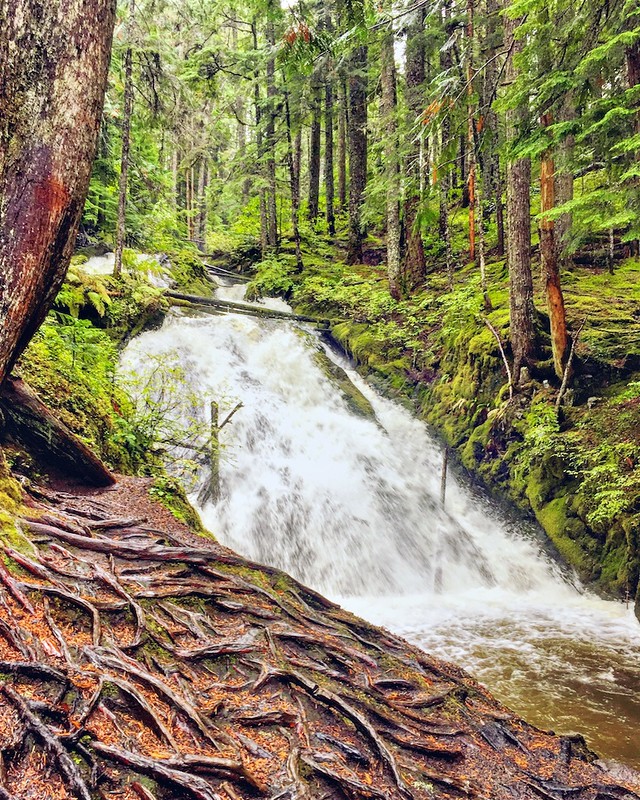 It’s no secret that I love history, and I’m as happy as can be whether I’m walking through a grove of centenarian cedars in the forest, or browsing exhibits in a museum. Our trip to this region was made complete with a healthy dose of history Timberline Lodge. The lodge is a living museum and National Historic Landmark that also operates as a hotel, ski area and destination for two million visitors a year. It was dedicated in 1937 by President Franklin D. Roosevelt and it holds many artifacts and historic information in the main lobby area where you can take a tour with a Park Ranger. Afterward, head over to the Cascade Dining Room for a drink or dinner while you’re 6,000ft up! 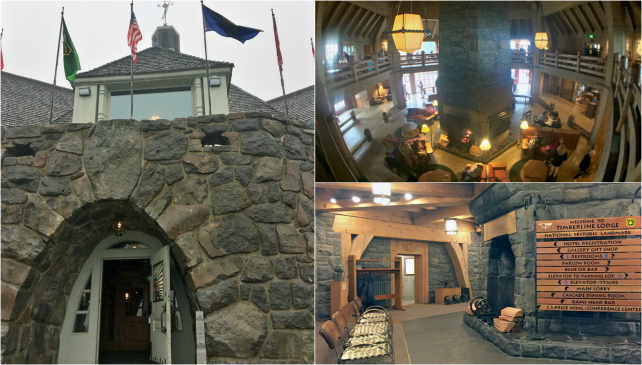 Mt. Hood is a 11,245-foot volcano , the tallest mountain in Oregon, which makes it hard to miss. Unfortunately during our visit it was clouded over and rainy 99% of the time so we missed a real clear photo of this majestic landmark. On our last day, we headed over to Trillium Lake for a walk and John was able to get a shot: 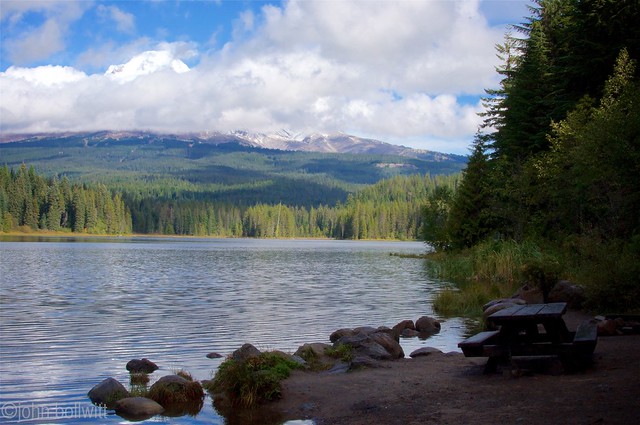 Here’s a gorgeous view on a brighter day:

If you really want to get to know a region, meet its people and cook its locally-sourced food. We did both of those things at once when we took a cooking class at The Kitchen at Middleground Farms in Wilsonville. There, in the refashioned cattle barn equipped with state-of-the-art appliances, we met Chef Jessica Hansen and joined a group of about 20 others for a date night cooking class right on the farm. 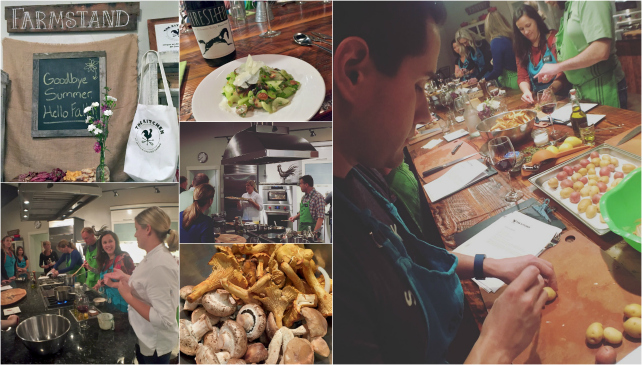 Foraged mushrooms, local lamb, salt roasted potatoes, and a celery, date, and almond salad was on the menu — and we were cooking it. It was our first cooking class together and we met some wonderful people, including other transplanted Midwesterners that had John speaking in colloquialisms most of the night. We picked up a few new skills in the kitchen, savoured some local wine, and had a wonderful time being social for an evening. The Kitchen at Middleground Farms is open for private classes, corporate retreats, and parties in the heart of the Willamette Valley.

Heading back towards the city, from farms and forests, we stopped in Lake Oswego and had the best possible guide for our walking tour of this community. Nicole Nathan, Arts Council of Lake Oswego‘s Executive Director, met us at St Honore Boulangerie where we had coffee, breakfast, and the delicious aroma of warm, buttery pastries permeated my clothing and stuck with me all day. 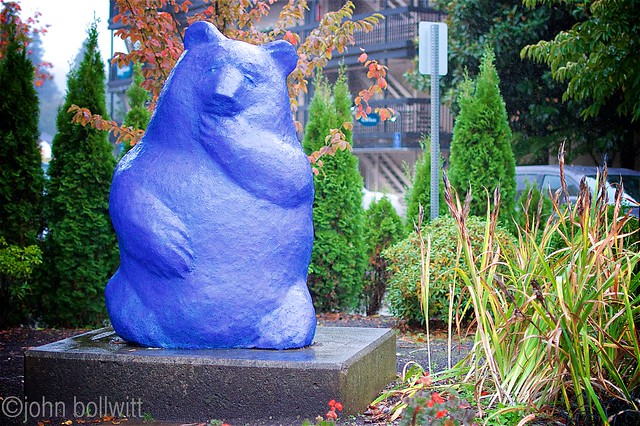 Nicole walked us around the town’s Gallery Without Walls, Lake Oswego’s award-winning public art exhibit, with permanent and rotating art by sculptors of regional and international acclaim, many of which are for sale. It is comprised of over sixty permanent and loaned pieces. Download the 2017 brochure to wind your way through Lake Oswego, guided by art (including a Canadian piece). 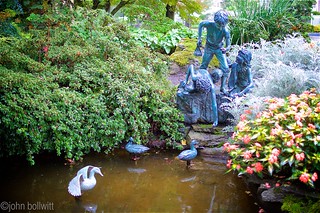 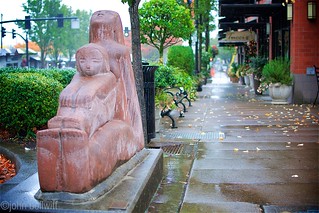 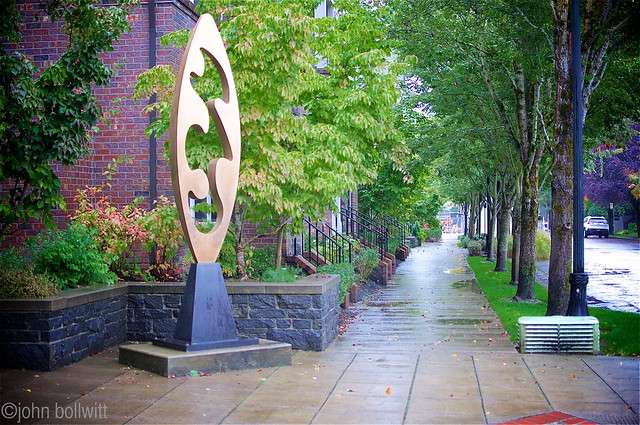 Of course I would be remiss to talk about a whole trip to Oregon without mentioning more about its local craft beer scene. There seems to be an endless roster of breweries but it’s the really unique ones that make a lasting impression. We loved Bunsenbrewer, a science-themed brewery in Sandy, OR. 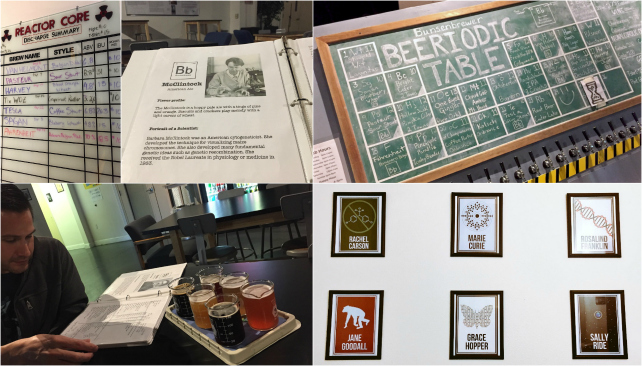 The venue was more like a warehouse jam space / gamer chill out zone than a traditional brewery, but that made it pretty charming along with the cardboard cutout of Mr Spock next to the Nintendo console and board game stack. Have a seat at a table that gives you flash backs to Grade 9 chemistry and order one of their latest brews, named after notable scientist. Even the restroom had a tribute wall to women in STEM. 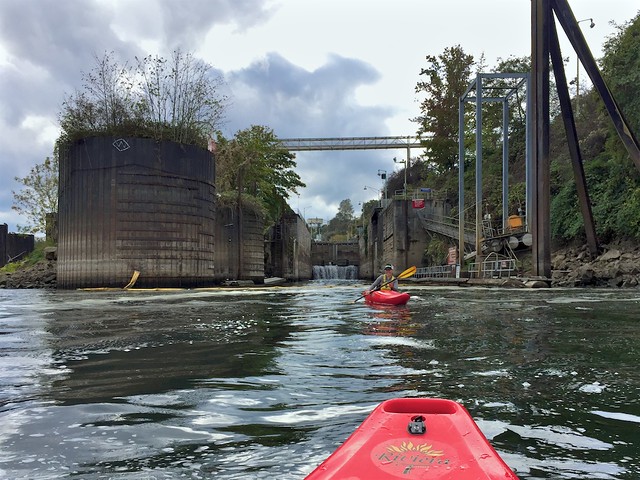 On our last day we took to the Willamette River, where the city meets nature’s sheer power and beauty at the nation’s second largest waterfall by volume. The falls rush between West Linn and Oregon City, a historic former trading outpost founded in 1829 by the Hudson’s Bay Company. Turn off the 205 freeway, and you’ll find a riverfront walkway and future home of a new falls viewing area. There you’ll also find eNRG Kayaking where John and I joined a tour for an afternoon. 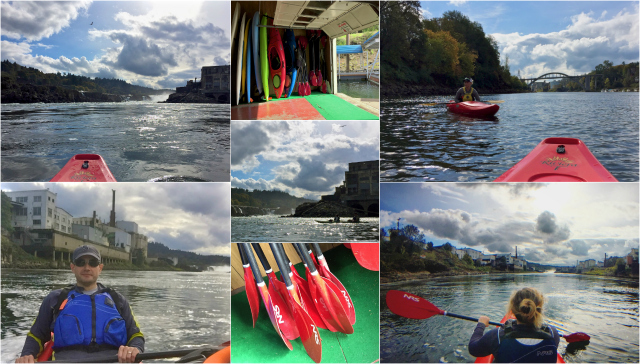 Heading up stream, we went by the historic Willamette Falls Locks and learned a lot more local history about the terminus of the Oregon Trail to the Willamette Falls Electric Company (founded in 1888), and the Blue Heron Paper Company plant. After 150 years of industrialization, there have been conservation efforts in recent years which are to thank for our encounters with herons, osprey, and sea lions while out on tour. 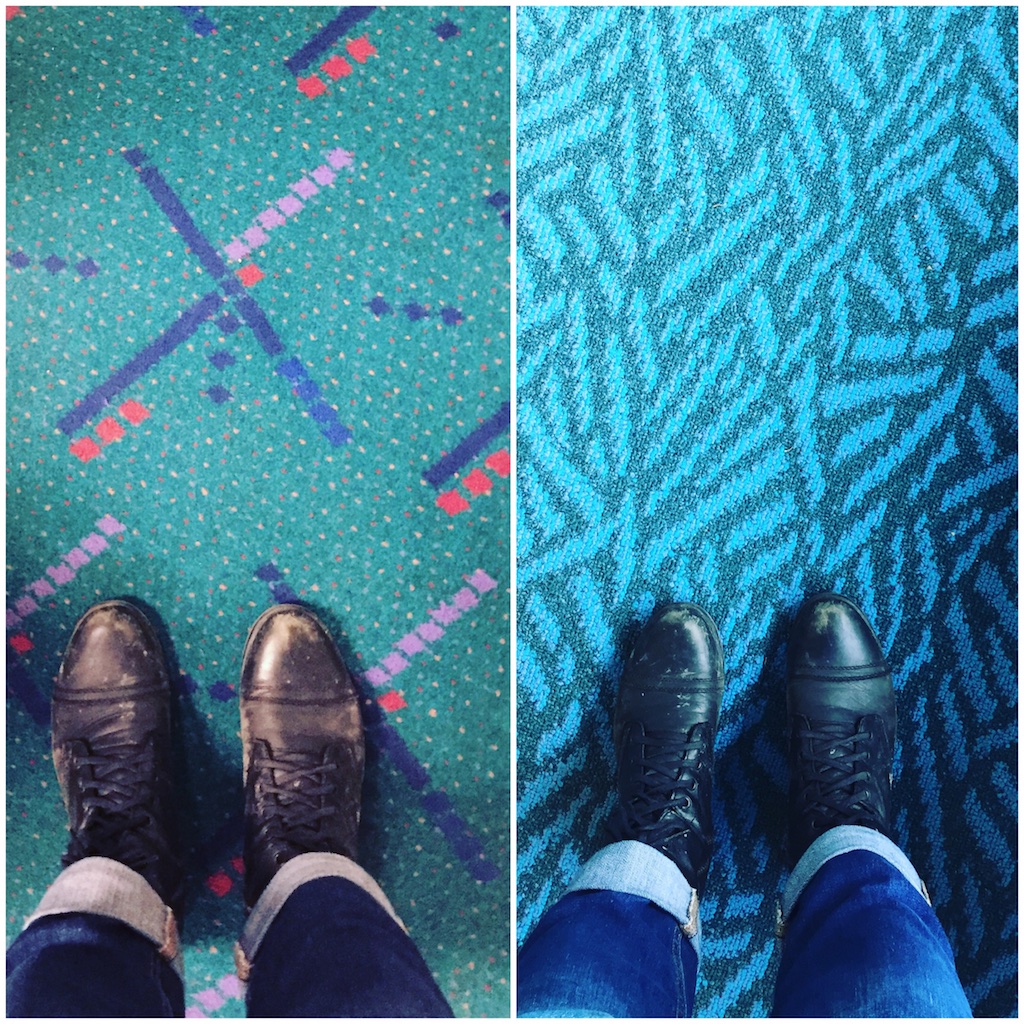 We hiked the forests, ascended the mountain, cooked in the valley, socialized with locals, paddled the river, drank crafted brews, and appreciated the region’s art all in one trip that was less than a week. Mt. Hood Territory offers something for everyone, and everything for anyone who likes to explore and experience a region to its fullest.

Oregon’s Mt. Hood Territory has everything you need to plan every aspect of your trip to this region. Fly into PDX from YVR, or take the drive down just past Portland to discover this diverse region centered around majestic Mount Hood, stretching to the Willamette Valley and beyond.