There’s been a game-changing shift for sports fans in Vancouver as The Sportsbar LIVE! at Rogers Arena has opened its doors this season. The upscale 14,000 square foot venue is the first-of-its-kind in North America to fuse an exceptional sports and dining experience with the energy and excitement of the bowl.

The Sportsbar LIVE! at Rogers Arena 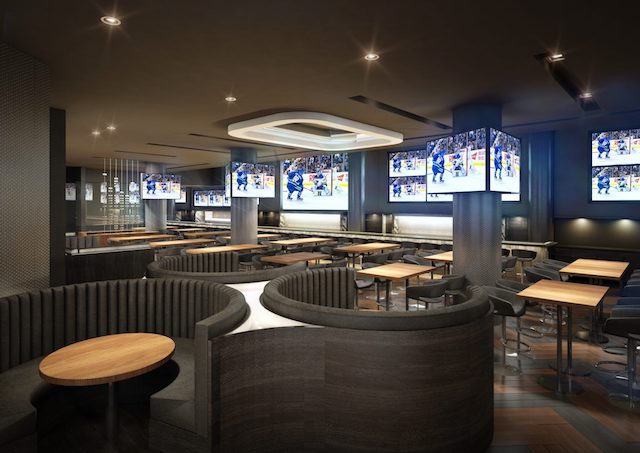 With a 524-person capacity, The Sportsbar LIVE! at Rogers Arena has 104 new in-arena seats offering a restaurant atmosphere, in-seat dining privileges, and an unobstructed view of the ice.

Its multi-purposed design speaks to the vast draw of the room that ranges from young professionals to die-hard sports and entertainment fans. The stunningly designed Trophy Room features leather booths with their own private TV screens, and there’s a VIP Player’s Lounge area for relaxed entertaining amidst semi-private booths. 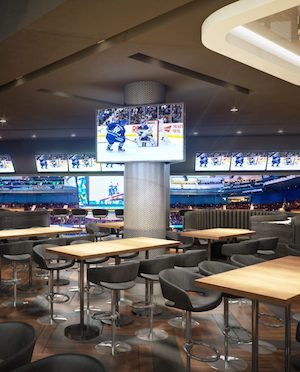 The 90-foot long “cracked ice” bar anchors the room where a massive 16 ½-foot projection TV keeps guests in on the action. A private Party Room featuring fully-equipped, exclusive bar and service stations along with premium in-arena seating is available for corporate and group events.

Alongside the extensive marble, walnut, and natural stone accents throughout the space, a nod to the country’s passion for hockey lore is displayed with 120 hockey sticks owned by iconic greats like Gretzky, Crosby, Ovechkin and Linden. Overhead, dynamic lighting is programmed to highlight the not-to-be-missed moments during live sporting events that are also captured on the 4K HD-TV screens anchored throughout the space.

Fan Favourites with a Delicious Twist

Executive Chef Robert Bartley heads up the elevated food and beverage program that is unlike any other sports bar venue. His extensive, premium menus include the best of classic fan favourites with added delicious twists like: 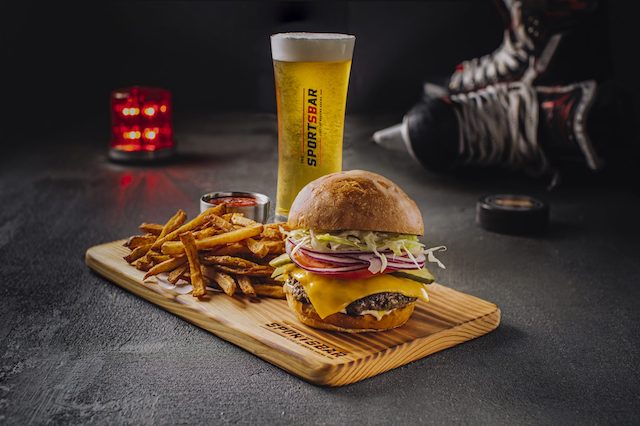 Located at 99 W Georgia St, The Sportsbar LIVE! at Rogers Arena is open for every Canucks home game, major sporting events, and live entertainment shows (access via the Georgia Street viaduct or Section 301 off the arena’s concourse).

Want to guarantee your spot at the bar AND at Rogers Arena for live NHL action? Ticket memberships in this area start at $119 per game.

Win a Hockey Night Out

The Canucks and The Sportsbar LIVE! at Rogers Arena have put together an amazing prize package for a lucky Miss604 reader and their guest.

You’ll start the night (on February 25th) at The Sportsbar LIVE! at Rogers Arena where you’ll have reservations for 5:30pm and a $150 gift card waiting for you. Enjoy some drinks and snacks, then head into Rogers Arena with two tickets to see the Canucks host the San Jose Sharks. You’ll also get some signed team swag to take home. Here’s how you can enter to win:

I will draw one winner at random from all entries at 12:00pm on Monday, February 20, 2017. The winner must be able to attend the game on February 25, 2017. Prize items including tickets will be available at The Sportsbar LIVE! at Rogers Arena for pickup for the winner’s 5:30pm reservation. Must be 19+. Please enjoy responsibly.