If there’s one person I would undoubtedly call a living legend here in Vancouver, right now, it would be Red Robinson, and he’ll be signing his new book at the Museum of Vancouver on Thursday. Red is a radio DJ who can be ranked up among the very best in the world, who had the instinct and foresight to bring rock and roll music to the Pacific Northwest over 60 years ago.

“Red was spinning the hits on Vancouver’s CJOR while still in high school in 1954. He was the first DJ to play rock’n’roll music on a regular basis in Canada. In 1957, Red jumped to Vancouver Top 40 giant CKWX, where he met Buddy Holly and Elvis and was MC for Elvis’ appearance. 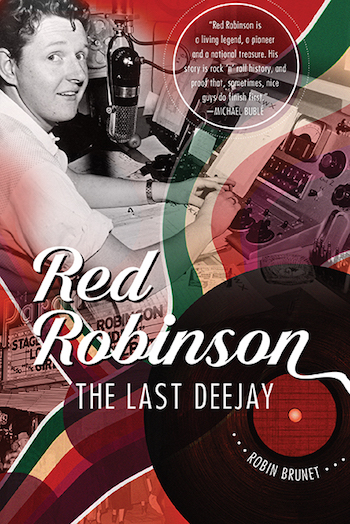 A move to Portland’s KGW in 1959 gave Red experience in a brand new rock’n’roll medium: TV. After a stint in the US Army, Red returned to CKWX in 1961. The next year he was hired as Program Director at Top 40 newcomer C-FUN, and he turned it into a rock’n’roll powerhouse. In 1964, Red introduced The Beatles on the same stage where Elvis appeared seven years earlier.

As host of CBC-TV‘s Let’s Go from 1963-1966, Red introduced some of Canada’s best-known rockers, including Randy Bachman, Terry Jacks, The Collectors and many more. In 1968, Red returned to CJOR, where it all began, as Operations Manager.

In 1971, history repeated itself when Red moved to CKWX. Red hosted Trivia Challenge, another coast-to-coast television series for CBC-TV in 1979-80. A group of contestants was so inspired by the concept they created Trivial Pursuit.

You can read all of this and more on Red’s website, which also hosts an amazing audio archives of interviews that span the last six decades.

Red Robinson will be on site at the Museum of Vancouver on Thursday to sign his new book, The Last Deejay.

Books can be purchased from the MOV Gift Shop. Red and Robin will be signing books after a presentation. Refreshments will be served.

Also on Miss604.com
« Refresh Market in Squamish: Win a Prize Pack
Winter in Wine Country With a Twist »