If someone were to ask me what I would love to do more of in Vancouver, “going to see live comedy” would be near the very top of my list. This city has such a seemingly hidden hive of world-class talent and we all need to experience (and support) our comics every chance we get. You have the opportunity to check out the hilarious Rob Pue this weekend as he returns home from MTV, Comedy Network, and national comedy festival appearances to hit the stage at Yuk Yuk’s in Vancouver. 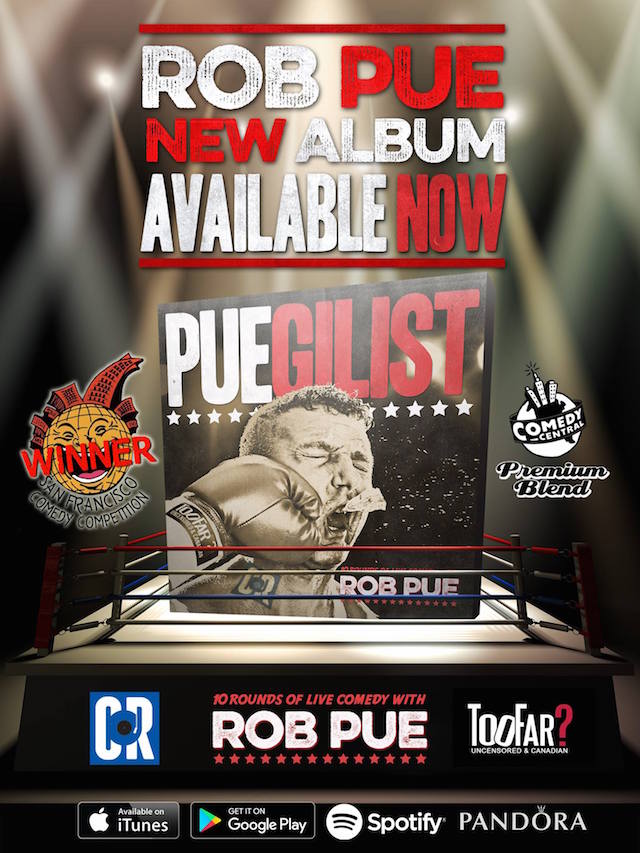 “A gregarious and dynamic comedian with a knack for telling it like it is, Rob has become one of the brightest voices to hit the Canadian comedy scene. With unmistakeable charm, wit and trade-mark act-outs, Rob is a must see performance.” [Tourism Vancouver]

Rob’s tour follows the highly successful release of his first official Comedy Album, PUEGILIST – Debuting at #2 on the iTunes Comedy Charts. Born in Chilliwack, Rob has appeared on Comedy Central, MTV’s Punk’d and had his own Comedy Now special on The Comedy Network. He’s also a regular on CBC’s Debaters, performed multiple times at Just For Laughs, the Winnipeg Comedy Festival, Halifax Comedy Festival and was the winner of the prestigious San Francisco Comedy Competition – with past winners including Doug Stanhope and Dana Carvey, and runner ups including Louis CK, Robin Williams, Ellen Degeneres and Patton Oswalt.

PUEGILIST is available on iTunes, Google Play, Amazon, and streaming on Spotify.

I have a copy of Rob’s album PUEGILIST to give away along with a 4-pack of tickets to one of his Abbotsford shows at Yuk Yuk’s. Here’s how you can enter to win:

I will draw one winner at random from all entries at 12:00pm on Tuesday, September 6, 2016. The winner can select their show date (September 8, 9, or 10) based on availability. Must be 19+. Please enjoy the hilarious comedy responsibly.

Update The winner is @TheContestadore!

Also on Miss604.com
« Gatsby’s Night Out at the Orpheum
5 Things to do in Gibsons and a Giveaway from The George »