Where to Eat and Drink in Victoria, BC

There are people who will tell you that Victoria has more restaurants per capita than most of North America, and they’re completely wrong, so you can ignore that urban myth.

But if they tell you this little city has restaurants punching way above their weight, I’ll get behind that statement seven days a week and twice on Sundays.

When I moved from Vancouver to Victoria in 2012, I worried I’d get stuck with small-town food after life in the big city. How wrong I was. Instead, I got blown away by the quality of the dining scene. Now that I’ve travelled extensively abroad, I can say with great confidence that, yeah, Victoria delivers big city taste with walkable small-city convenience. From breakfast joints to taco trucks, it’s all about using local ingredients and celebrating diversity.

Even cocktail-wise, the scene in Victoria is hitting the right mix. The modern godfather of Victoria’s cocktail scene is Shawn Soole, who made the venerable Clive’s Classic Lounge become noted as “one of the world’s top-five hotel bars” by the Thirsty Traveller, and Soole’s influence has spearheaded an enviable cocktail culture throughout the city.

Soole was a proprietor at the speakeasy Little Jumbo for a while but now has his hands in all kinds of places, like Olo Restaurant and Phillip’s Brewery. A couple years ago, the only two bartenders from all of Canada to attend the international bartending competition “Tales of the Cocktail” were from Victoria.

If you’re after cocktails, Clive’s Classic, Little Jumbo, and Veneto Lounge are just three great places to have your nightcap, and the trio are walkable from nearly any hotel in Victoria.

Don’t have too much booze, though, because you’ll want to be up ‘n at ‘em for breakfast. This town loves its breakfast.

When people are still rousing to consciousness in other cities, there’s a lineup down the block at places like The Jam Café (opening in Vancouver!) and Blue Fox or Floyd’s by 8:00am I’ve just finished bacon-and-emmenthal-stuffed waffles at Catalano Restaurant and sadly thought how I’m leaving Victoria tomorrow and breakfasts will be all downhill from here. From Eggs Benedict to pancakes and beyond, Victoria doesn’t like a phoned-in breakfast. The “most important meal of the day” was my favourite one for dining out as a resident.

Whether you’re into the over-the-top decadence of the Jam or you think you’d rather an easier hand-held breakfast like the amazing $6 bocata sandwiches with grilled chorizon, Manchego, and a fried egg available at Chorizo & Co, or pastries at any of the great independent coffee houses in town, your day will be off to a good start.

Speaking of independent coffee houses, that’s something worth pointing out. Chains don’t do great here in Victoria. Instead, you’ll find indie joints like Shatterbox, 2% Jazz, Hey Happy!, and others all brewing exceptional coffee with a love of their craft.

Lunch and dinner come in all sizes and price ranges too. From gourmet local meat tacos at the Taco Justice truck or Vietnamese caramel chicken at Foo through to world-class Napolitan pizza at Prima Strada on Cook or take-out ‘50s-style burgers at Big Wheel, or even some fish tacos from the internationally-renown Red Fish Blue Fish taco stand, there are many budget-friendly options that won’t leave your wallet hurting.

Dining out in Victoria means a whole world of options and it’s understandable if you get stressed out about only being able to enjoy a few places during your stay. Brasserie L’ecole takes no reservations and can have lines a block long some nights, but steak frites and the city’s best burger await you in this well-priced classic French brasserie that has no pretensions, only quality service. 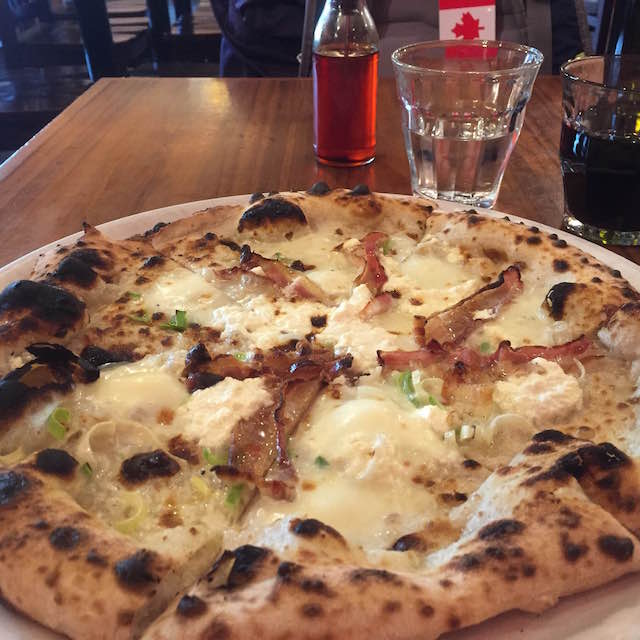 Il Covo or Pagliacchi’s will deliver old-school family-style dining, while award-winning Zambri’s will give you modern interpretations of Italian classics. Seafood is everywhere here, and Nautical Nellie’s and Ferris’ Oysters have led that scene for decades and are going strong. I’ve dined at all these in recent years and think you really can’t go wrong with any of them.

Most recently, I had a fantastic $39 chef’s-choice four-course meal at Il Covo that I would recommend to anyone, not only for the food but for the magnificent service we received.

A short foot-ferry from downtown, Spinnakers’ Brew Pub was Canada’s first brewery-meets-eatery, and they’ve had more than 30 years of being synonymous with a good night out. In keeping with that legacy, North 48, 10 Acres Bistro, Canoe Brew Pub, and all kinds of other “casual” dining places are offering the amazing range of produce and meats all grown within 100 kilometres of Victoria.

If you’re looking for a short trip out of town, just one hour’s drive away, in Duncan and Cowichan Valley, you’ll find an amazing foodmaker’s paradise that provides for most of the city’s dining scene. From wineries to Canada’s only tea farm (Teafarm.ca, worth dropping in for a glorious cuppa with artisanal chocolates!), the quality of local food found around Victoria will blow your mind.

“Eat local” hasn’t been a trendy recent development here in Victoria, it’s been an ethos and a passionate cause for over a decade as those in the food industry have fought to bring food sovereignty back to Vancouver Island after decades of watching it slipping away.

Honestly, I didn’t realize how spoiled I was to live in the heart of Victoria’s amazing food scene until I spent a few months living in Europe. Believe me, this city is delivering a quality food scene for a city twice its size. Even the pizza at Pizzeria Prima Strada is superior to any I had in Europe. Really.

I highly recommend that dining out all over Victoria be high on your travel priorities when you’re here. Stay a few days longer and do an overnight trip to Duncan so you can wine taste and visit Hillary’s Cheese or have lunch at Zanatta Winery’s bistro, or so many other amazing food joints up there.

If food is one of the great enjoyments in your life, you don’t need to go to massive sprawling cities to find a vibrant food scene. Instead, you can come to one of the world’s most walkable cities and stroll to one wonderful eatery after another. Pack your fat pants and come enjoy what Victoria’s serving up. You won’t regret it.

If “foodie” is one of the most significant ways you describe yourself, then stick a reminder in your diary for January, 2017, and look up “Dine Around & Stay In Town” for Victoria, where all the heavy-hitters offer great three-course meals and hotels have reduced stays available in the off-season weeks after Valentine’s Day annually. It’s a terrific way to explore Victoria’s food scene for a better price.